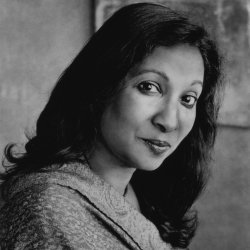 In solidarity with  those in India who are resisting  forces that would silence the singer’s note, the poet’s cry, the painter’s arc of colour, the philosopher’s fierce light, I offer these words. I wrote them some time ago but they seem relevant now.

Silenced writer. I start with that. Without silence the words we treasure, the words we measure our lives by, could not appear. But silenced is different.

I see a child who has no books, no pens, and scribbles words in the dirt, words that threaten to fly off and join the stick insects on the bark of a nearby tree. I see a grandmother dressed in a wrinkled white sari, her hand on the cloth that covers her thigh; over and over again she marks the jut and whorl of a classical script she has taught herself with difficulty. She writes lines that can never appear, skid of invisible script.

I see bodies in public places, bodies threatened, beaten, banned. Barbed wire, coils of it glinting in sunlight. Bars of a prison cage, the writer crouched inside, parrots above the cage chattering in heat. In the market place fear so palpable, people wrinkle up their noses and cover their faces with their handkerchiefs.

Fear stinks, no one can breathe properly. Who will have the courage to write?

I see tunnels of smoke, gushing flame where once the great libraries stood. Barbarians, their faces covered with ski masks, looting, burning. Brick, mortar, marble melting, together with the precious imprints of hundreds and thousands of human souls. The barbarians are scared of these traces.

And the barbarians, who are they?

Where are they? Are they outside our gates? Or are they within?