In the month of February 2017, the University of Delhi saw an unprecedented attack on the culture of free speech and dissent from the student wing of the Hindu right. Posing a formidable threat to the very idea of University – the spirit of critical thinking, of uncensored questioning, and accommodation of heterogeneous, universal ideas – the violence was also an assault on the intellectual traditions of early India, a period that the aggressors look up to as an age of utopia, prior to the dark ages ushered in by the "Islamic invaders". The whole gamut of Indic philosophy – from Tarkashastras and Kautuhalashalas to Dara Shikoh's Majma-ul-Bahrain – shuddered on seeing the assailants of the argumentative Indian. Ironically, the assailants wished to stifle dissenting voices in the name of this country.

A seminar titled “Cultures of Protest”, which sought to explore the cultural texts of dissent, was perceived to be seditious, threatening the integrity and sovereignty of this country. And the threat emanated from one Umar Khalid, a doctoral scholar in JNU, who was booked under charges for sedition in February 2016, and was later granted regular bail (the chargesheet hasn't been filed yet). 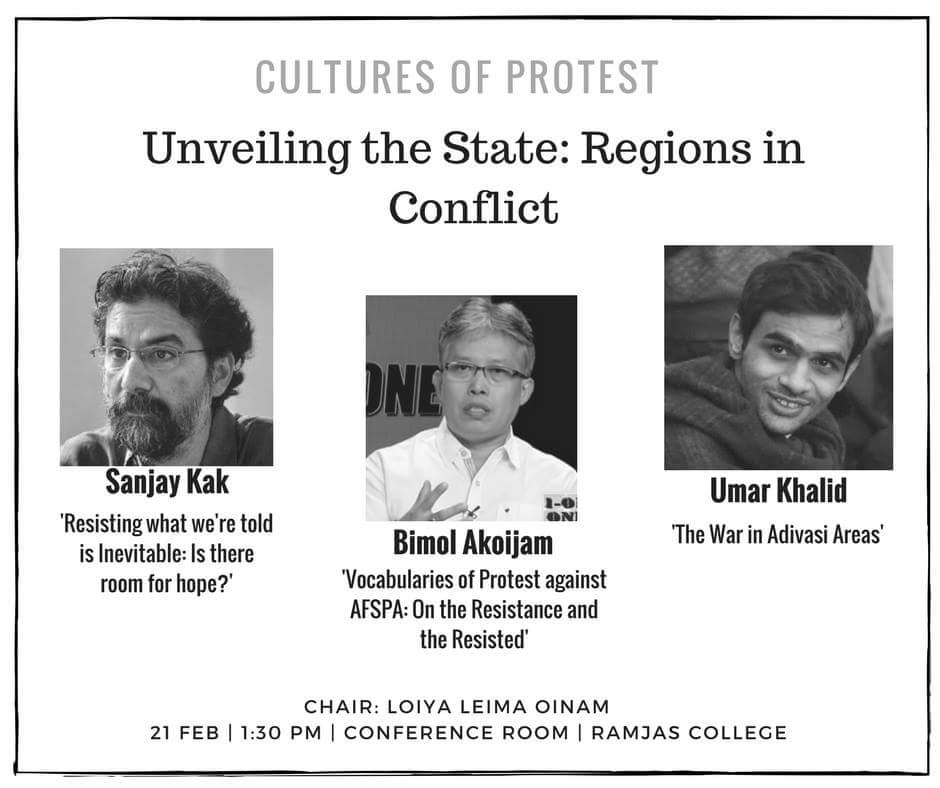 He was invited by the Literary Society of Ramjas College, and the English Department of the college, to speak on his doctoral dissertation, which is on Bastar, as a part of a panel on regional conflict, with documentary filmmaker Sanjay Kak and academic Bimol Akoijam. If a mere academic discourse on subaltern groups threaten the integrity and sovereignty of this country, then can we consider those passionate claims of a centralised “Akhand Bharat” of the Hindu golden age as histories? Doesn't this fear of regional dismemberment lay bare the contradictions of a derivative discourse, that of our nationalism?

The Action Taken Report submitted by the Delhi Police, conveniently and quite skillfully, twists the narrative of events. Sample the first line under “The comprehensive narration of incidents occurred on 21.02.17”. According to the report, "at around 11 AM, information was received at Police Station, Maurice Nagar regarding an event “Culture of Protest” organised by Literature Society, Ramjas College at ECR Room, Ramjas College, in which Mr Umar Khalid was also invited to give lecture on the issue of "exploitation of adivasis" in Bastar region." 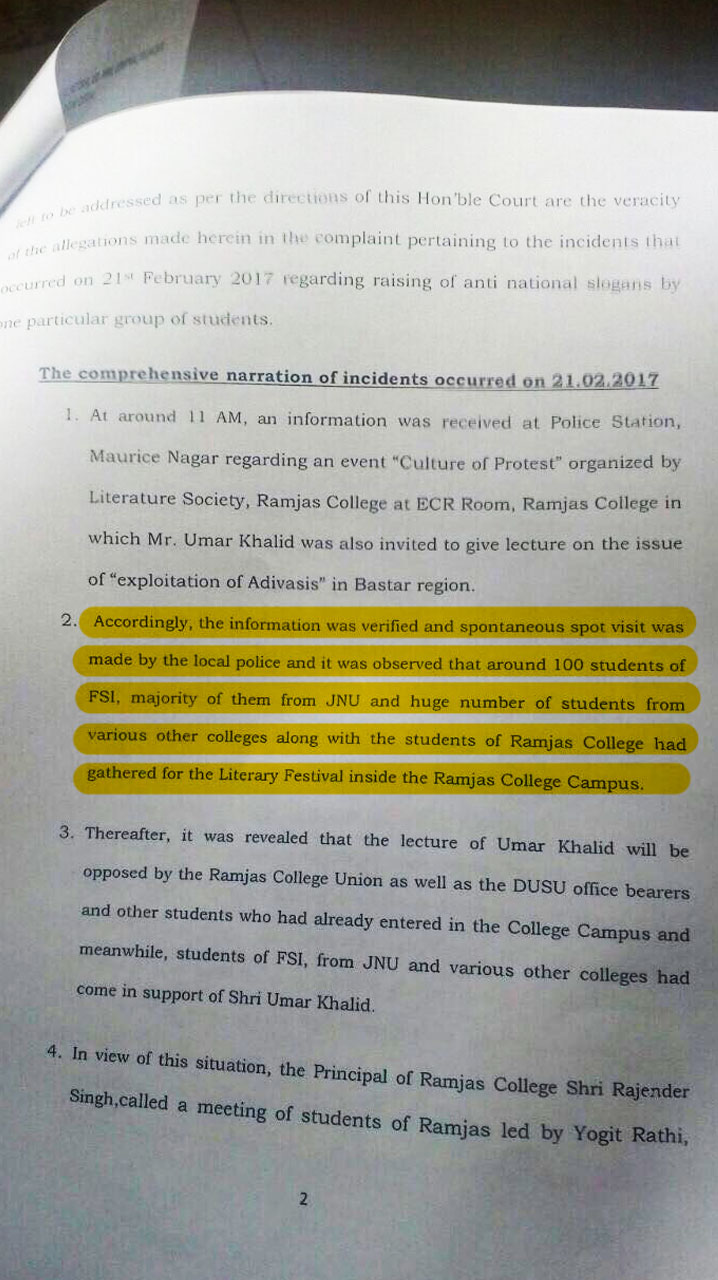 It reveals one dissonant statement and one factual error:

(A) I reached the venue at around 9:15 AM, and there were policemen in uniform. If they were in darkness till 11 AM, what were they doing there in the wee hours of a normal working day? I presume they were doing their duty, because they were informed about the event well in advance.

(B) The event was held in the conference room, and not the ECA room.

It goes on to state that after objection from the Ramjas College Student Union, and the Delhi University Students Union (DUSU), the Principal (who has been misnamed in the report) called a meeting of “students of Ramjas led by the… President, Ramjas Students Union and teachers in which it was decided to cancel the visit of Shri Umar Khalid as there was an apprehension that his visit might lead to a law and order situation”. It fails to take into cognizance that both the Ramjas students union and DUSU are bastions of the Akhil Bharatiya Vidyarthi Parishad (ABVP), which owes its allegiance to the ruling party. Moreover, it would be a gross generalisation to project the President of the Ramjas Student Union as leader and representative of the “students of Ramjas”, because, the aforementioned championed the cause of the ABVP and its supporters, and unfortunately the Ramjas student community is not a homogenous political entity. Nowhere does it mention that the “apprehension… might lead to a law and order situation” stemmed from the violent threats posed by the ABVP, and the aggression of its supporters. It fails to record the jubilant celebrations that the aggressors indulged in after Khalid was disinvited, by playing loud music just outside the conference hall while a session on caste and subalternity was in progress. There was a clear attempt to disrupt the seminar.

It melodramatically records how “all of a sudden, the participants of Literature Fest came out under the leadership” of five professors (who have been erroneously named in the report, in an attempt to vilify the best that Ramjas has) and started raising slogans “directed against ABVP, college authorities and Police and carried out a protest march inside the college”. It goes on to list the slogans that were allegedly raised. One would not expect the Police to study texts in their contexts, or approach events from historicist perspective. But the least that they could do is to speak truth to power. Slogans demanding “vaad-vivaad ki azaadi” and “Manuvaad se azaadi” are heard as separatist, anti-national voices. Isn’t it ironic that individuals are being compelled to raise slogans to reclaim rights that are enshrined in our constitution? Isn’t an infringement that disregards the Constitution anti-national enough to threaten the idea of India? The Report barely has anything on the atrocities committed by the members of the ABVP and its supporters, it doesn’t record how the speakers and attendees were trapped inside the conference room, under siege. It gloriously talks about the Police’s “timely intervention, constant and sincere efforts” that helped in pacifying and dispersing the mob. Perhaps they don’t want to admit that there was only one set of aggressors, and that it was not a clash between two “sides” but a well concerted attack on the culture of dissent- the first step in the making of a successful fascist regime.

DU students and teachers speak up against Ramjas violence

Dear Journalists, Please be Objective; Acknowledge that the ABVP Was Violent at the 22 Feb Ramjas Protest

Where the Mind Is Without Fear: The Ramjas Attack