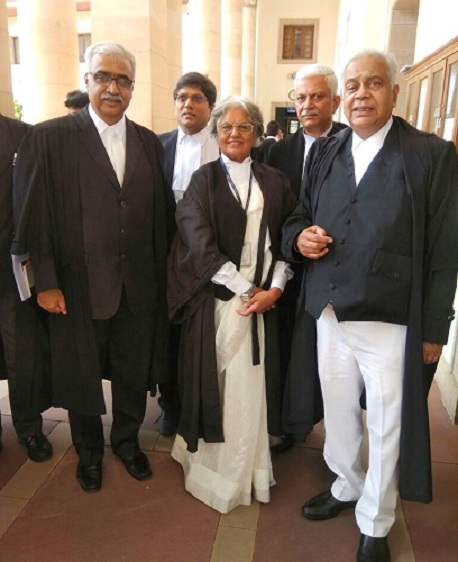 A tweet by senior advocate Ms. Indira Jaising took the shape of a “Gown Wapsi” movement on the eve of India’s 70th Independence Day. Three decades ago, Ms. Jaising had become the first woman to be designated senior advocate by the Bombay High Court. She has been a leader of the feminist movement in India, and has advocated fiercely for protecting the rights of women by challenging the discriminatory personal laws, and defending survivors of sexual violence. Now, after four decades of service to the bar, she has taken the decision to shed the gown of a senior advocate that, according to her, is no longer a professional gown, but a commercial gown. She has stated that the so-called senior’s gown has become a symbol of discrimination, as it is based on an arbitrary practice, and ends up distinguishing a rank of advocates from the others.

Indira Jaising in an interview said that, “It has been 70 years since Independence. Parliamentarians have been debating on the issue since the Quit India Movement and yet we in the legal profession are aping the British attire and the behavior inherited from them”.

Currently, the basis of designating a senior is “experience and standing at the Bar or special knowledge or experience in law”, and that too in a secret ballot system. According to Ms. Jaising, apart from this process of designation being extremely subjective, it is an opaque method which is susceptible to misuse, as it can be a discriminatory tool to favour the selected few advocates. She has thus challenged the existing method of designating a senior in the Supreme Court, seeking objective guidelines that will make the procedure transparent.

As per a Bar and Bench survey conducted in 2016, 75% of the survey participants felt that designations are discriminatory and based on political ideology, and 74% of the participants also felt that discrimination was based on social status, gender, caste, and religion. The “junior” advocates, usually a product of a competitive examination system, are dissatisfied with the subjective election of advocates at a rank above them. The shunning of this rank for a more selection-based method can lead to an equal playing field. At the moment, comparatively senior advocates charge higher fees than the non-designated ones, and have a de facto monopoly at the bar. This unjust system is unfavorable to the talented young lawyers who could be equally qualified, if not more.

In the petition, Ms. Jaising relied on this survey, and practices in other commonwealth countries, and has suggested a 100-point criterion for the court’s consideration which included parameters such as number of years of practice, public interest lawyering, number of reported judgements, quality publications, other contributions to the public affairs etc., for designating a senior. She vehemently opposed the current evaluation methodwhich is only based on the perspective of the judges that is formed when an advocate is arguing in his/ her court.

It is indeed a strange practice as compared to countries like the United States of America, where the advocates are not mandated to wear a gown, but can appear before the judge in a professional suit. The need of a gown itself is questioned by some legal practitioners, considering that the black gown was adopted as a token of public mourning on the death of Queen Mary. Needless to say, it will not stand the test of relevance today.

While the method and procedure of designation is being challenged and is part heard, the senior gown, meanwhile, is a disposable symbol of the rank-distinction between a senior, and a junior advocate when there is none. In the absence of any rule or law prescribing a different dress code for senior advocates, Gown Wapsi movement has the potential to end the special treatment received by the senior advocates.