A Letter to Gauri: Love, Rage and Redemption 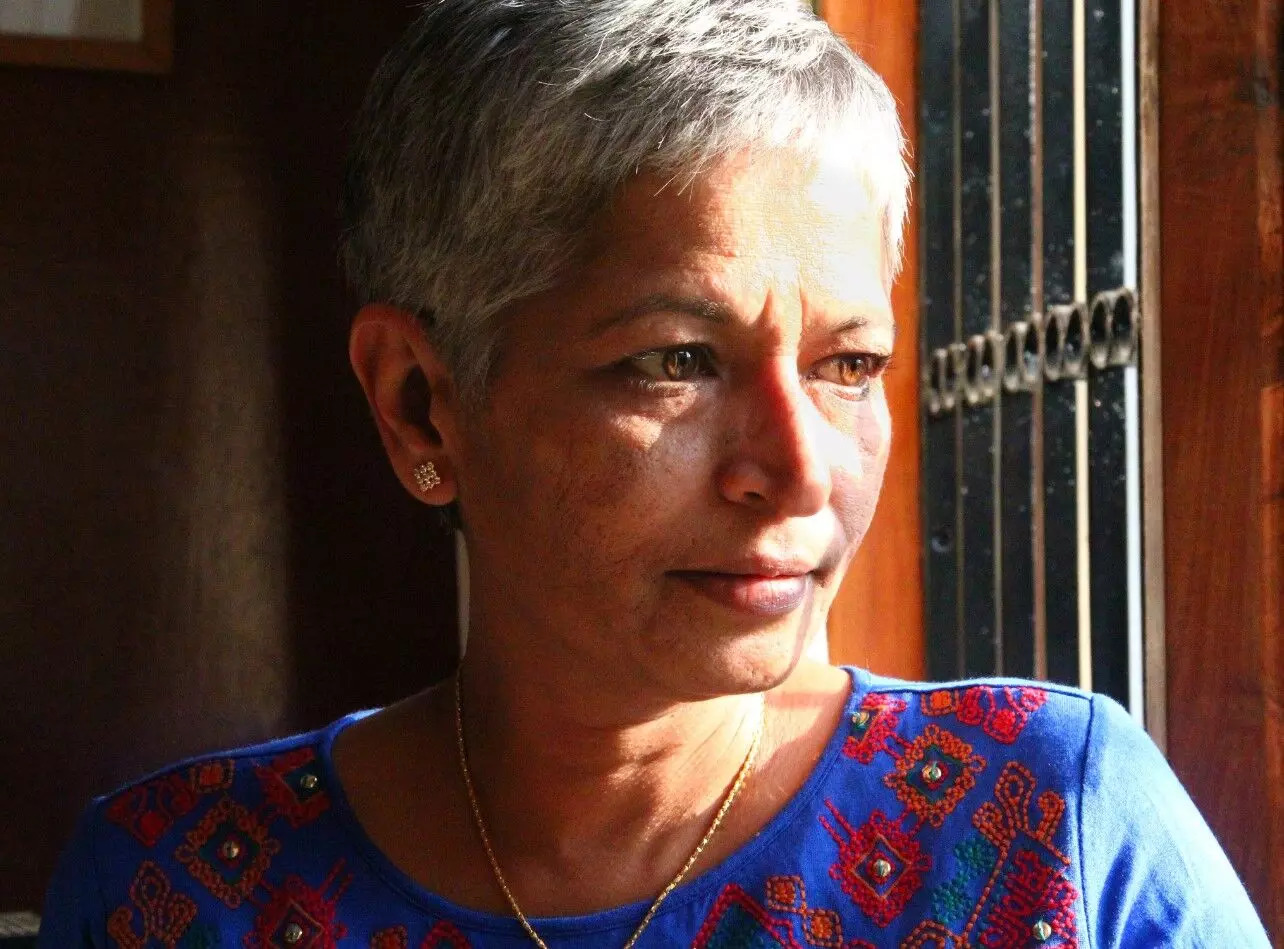 Prakash Raj, your dear friend, well-loved film actor and the “rock of support” for your family as your sister Kavitha called him said it so poignantly at your memorial on September 5 this year, to a hall overflowing not only with people but with emotion, love and memory in Bangalore: “When we buried her on that fateful day, I knew that we were not burying her body but planting a seed.”

And looking at the hundreds who had gathered around on realised how true that was.

A pigeon flew into the stage and fluttered around for a bit excitedly before flying out. Almost like you coming back to remind us that you remain a vital presence even in your absence!

Gauri. You have become a name and the persona it embodies even if perhaps disembodied from what you actually were and what many knew of you, whether in part or whole. Gauri. A seed now not only firmly rooted in our collective conscience but flowering as a force of fierce love. Even five years after you have gone. Is it this love that spontaneously flowed through you touching all those you knew which has made you such an enduring and endearing memory I wonder?

Arundhati Roy, one of the special guests at the memorial recalled how she would get a call from you each time she published an essay “Arundhati can I please translate this essay of yours. I love you!” It must have been this love that pulled Arundhati to come down to Bangalore barely three days after burying her mother the redoubtable Mary Roy with little time to grieve by her grave. But as the normally rebellious daughter confessed, she also came since otherwise “my mother would have been ashamed if I had not come for Gauri’s memorial.”

A similar pull of love must have dragged another of your soul sisters too to the memorial, Teesta Setalvad. If not in person then through a characteristically inspiring message sent by video. Barely two days after her release after more than two months of incarceration in Sabarmati jail for the inexplicable crime of holding the powerful accountable for their crimes. And that too by the book, the Constitution of which she is a self declared and committed foot soldier. Her super human efforts to get justice for the victims of the Gujarat pogrom against Muslims resulted in around 125 convictions of those who would have otherwise literally gotten away with murder. Her spirit remains daunted.

In her message Setalvad said she often thought about what you would have done if you were alive. You would have called not only concerned about her but also about the condition of the women in jails.

Setalvad in turn instead of being concerned about the freedom that has been taken away from her has now taken on the task of ensuring justice and release for all those undertrial women prisoners who lie languishing in jails under the most neglected conditions. Perhaps because they do not enjoy the same political patronage as that of the recently released rapists and murderers of Bilkis banu and her family.

Little wonder that you were soul mates.

As Shyamsundar your other soul mate said in what I felt was one of the most moving moments of the film that Deepu (Pradeep another comrade devastated by your death) made on you “Gauri was somebody who responded more from the heart than the head.” Your politics came through as being as much about care and compassion as it was about spontaneously confronting no holds barred all that you felt was unjust and wrong.

It was as much a rational struggle against the worst in man made religion, as it was an intuitive attempt to reclaim the best in human faith. You were contradictory, colourful, guileless, irreverent, vulnerable and real. Not a mere monochromatic icon that could be valourised and appropriated as the archetypal radical or vilified and demonised as anti national or anti Hindu.

Nothing symbolised this better than the characteristic exchange you had with a young boy on Facebook who declared that he would celebrate your death with sweets and crackers. Totally unfazed you signed off with a cheerful “magaa (the affectionate term “son” with which you addressed all young men including those you were fighting with on Facebook) why do you want to waste your money? Send me your account number and I will transfer the money for the sweets and crackers.” This was your natural way of dealing with and deflecting hate. With humanity and humour.

It is a tragedy that it could not deflect the bullets poured into you by those to whom hate comes as naturally as love came to you.

Yes, as Shivsundar said insightfully about you in his poem to you just after you were killed you loved love and that is why you hated hate. With as much rage as redemption.

Looking at what has been happening over the last five years since you went, and recently, I wonder how you would have confronted and engaged with not only hate but its open celebration by a majoritarian politics that is blatantly legitimising the worst forms of domination and discrimination based on religion, caste and gender today.

Like not only the remission of the convicted rapists of Bilkis Banu but their shameful felicitation by those very same forces who were behind the targeted violence against Muslim community and the planned rapes of the women in Gujarat, 2002. Rapists and murderers who were presumed innocent only because of the impunity guaranteed by the “sanskari” Brahmin caste they were born into.

Like the barbaric manner in which a member of the ruling party in Delhi incarcerated her domestic worker for almost eight years and tortured her in despicable ways including breaking her teeth. Only because the young woman was from the Adivasi community and the employer could claim impunity on account of her arrogant privilege of class, caste and religion.

Like the chilling normalcy with which the teacher inflicted violence on a young dalit boy in Rajasthan who died after being punished for drinking water from a pot meant for the upper castes. Caste purity had to be protected at all costs, including the life of a young child.

Like the recent allegation of rape and molestation of two minor girls by a well respected and “progressive” Lingayat Pontiff who had given them shelter in an orphanage run by his Matha in Karnataka. His religious stature perhaps gave him impunity and the political patronage he enjoyed protected him from immediate reprisal.

Looking at the wide diversity of people who had thronged together cutting across class, caste, religion, gender and age for your memorial this year too as they did earlier I wondered. How does one sustain a movement of this kind which is based on a collective mourning of what is being killed within ourselves, and is yet struggling to find a politics that transcends the vicious polarisation that is being forced on us today by Hindutva, that political force which you so fiercely stood against.

I am sure for instance that you would have walked up to the Pontiff and told him that if he was the true Sharanaru (a term signifying surrender and humility) that he called himself instead of the more pompous Jagadguru (Guru of the world), instead of trying to flee and get bail he would surrender to the authorities and allow himself to be judged by the laws of the land as framed by the Constitution. And by doing so redeem not only himself but the faith he belonged to that had dared to defy the discriminatory politics of the caste system and vedic rituals in the twelfth century.

Let me end this letter with a story of mine that summed up the spirit of the evening and what you symbolised.

As we walked out of the memorial meeting on this September 5 the heavens had opened up reminding us of the fateful night that you were shot.

Three of us, including my daughter, a friend and I huddle under our umbrellas wondering not so much about climate change and injustice but how to get back home when a miracle happens. An auto overflowing with people swerves to a halt in front of us. One shadowy figure from inside yells out my name, while another waves enthusiastically asking us to get in.

The first was Nasreen, my friend, free spirit and neighbor who cut her political teeth on the anti CAA protests in Bilal Bagh and the second was Venkatesh, a well known Dalit activist. We pile into the auto, onto each other, with Nasreen perched next to her auto driver comrade Moin who ferries her to and from meetings in which he also participates.

A non stop conversation and banter follow. “Instead of Memories of Gauri the backdrop should have said ‘ ‘Dream of Gauri'”, said an inspired Moin who I am sure had never known of you when you were alive. Venkatesh is humming a song in the background “Dweshada gaali beesuthide namma bharatha desha dalli (the winds of hate are blowing around us in our country)”, -a rather morbid but perhaps more realistic take on the more hopeful “preetiya gaali beesuthide (the winds of love are wafting through our gullies and mohallas)”.

“You better make up a good song and sing for me after I too get shot!” laughs Nasreen who aspires to become a fearless activist icon like you. “Why does your daughter not have a big bindi like you” Venkatesh asks me curiously. “The size of her bindi makes up for me not having one” responds daughter.

The conversation drifts to food and I have to confess sheepishly that despite being a lapsed brahmin I don’t eat meat. Venkatesh pities my plight. “But my daughter more than makes up for me by eating everything that moves,” I quickly add. “Arre it is her choice whether to eat or not ” Nasreen adds. “Like wearing or not wearing a burkha is my choice”.

Venkatesh thinks and nods in agreement. As he smartly negotiates the traffic jammed on the road that looks and feels more like a river, Moin says sadly, “these rains are not natural. It is Kudrat or nature showing her sorrow, there is too much conflict and hate in this country for her to bear.”

It was like your spirit accompanied us in the auto that helped us get to our homes safely cocooned in the human warmth of this whacky little world despite the darkness and despair we were driving through.

You remember the first letter I wrote to you the morning after your murder? I was deeply shaken especially since we had met the previous evening, barely a couple of hours before you were gunned down and had a remarkable conversation that will be forever seared in my memory.

I wrote then: “Yes the heavens wept last night for you. But this morning the sun is struggling through the clouds telling us that ‘you can not keep a good woman down’.

The voices that refuse to be silenced will continue their conversations with you Gauri.

And that is a promise.”

My heart was empty and bleak when I wrote five years ago. This time it is full. With all that you have left behind.

And so the conversation, as promised, continues…

First published in The Citizen.
Madhu Bhushan is a women's rights activist, (re)searcher and occasional filmmaker.