From the day the BJP Parliamentary Board announced that Droupadi Murmu, a Santhal leader from Odisha, would be the party’s nominee for India’s Presidentship, the media has been overflowing with opinions on how this was another ‘master stroke’ from the party’s high command, that it will win over tribal communities in the State Assembly elections due in coming months/years and even in the 2024 General Elections.

While some goodwill may be created through the party’s propaganda and the mainstream media’s obsequious service to the BJP’s cause, all this hoopla begs the question of why the BJP needs these crutches? Why are tribals disillusioned in the first place? This, of course, leads to the next question. Will such symbolic moves assuage the deep frustration and resentment brewing among vast stretches of tribal areas, both in Central India and the North-East?

There are three key issues which have caused disaffection among tribals, especially in the Central Indian tribal belt that stretches right across from eastern Gujarat to Odisha, including northwestern Maharashtra and Andhra Pradesh, Madhya Pradesh, Chhattisgarh, Jharkhand, and southern West Bengal. It is notable that the BJP runs the State governments only in Madhya Pradesh, Gujarat and now Maharashtra. Even in these three states, it actually won the last Assembly election only in Gujarat, having managed to grab power in Madhya Pradesh and Maharashtra only by splitting the ruling party/alliance after a hiatus. This reflects the BJP’s rather weak position in tribal-dominated states and hence its desperation to do whatever it takes to woo back tribal communities. But the Modi government and the BJP state governments are carrying a very bad record on the three issues of implementation of the Forest Rights Act (FRA), allocation of funds for the welfare of tribals and curbing the rising atrocities on tribals.

The FRA, passed by Parliament in 2006, provides for, among other things, giving land titles to tribals and other forest dwellers for those parcels of land that they have been traditionally tilling. This was envisaged as a measure to economically empower the tribal community members. The chart below shows the record of various States in the implementation of this law in terms of the share of claims that were processed and land titles awarded as of end-March 2022. Clearly, most of the BJP-ruled states – shown in orange bars – are laggards. 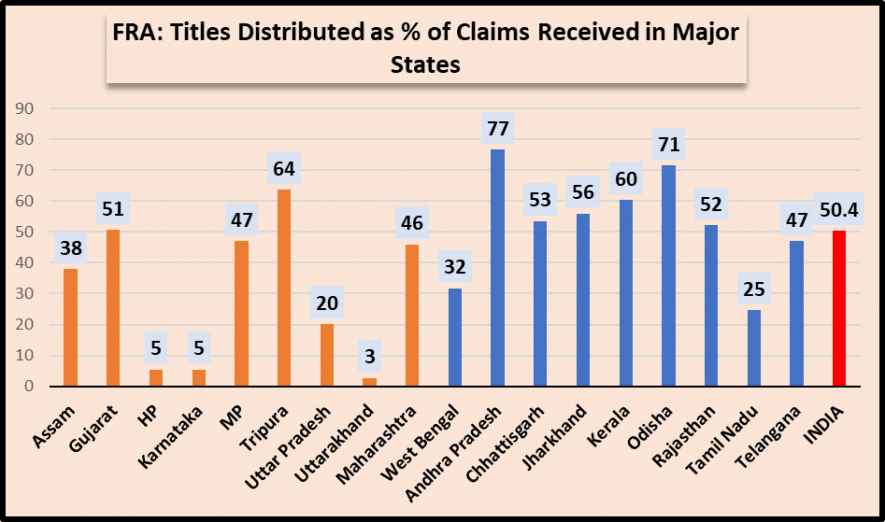 Among these BJP-ruled states, HP and Uttarakhand are small states, while UP has a very small tribal population, mostly concentrated in the Sonabhadra district. What is remarkable is that except for Tripura, none of the BJP-ruled states has crossed even the all-India average of 50.4% claims converted to titles. Gujarat, where BJP has been ruling continuously for nearly 30 years, has just reached that average level. Most of the other non-BJP ruled states have done much better, with Andhra Pradesh having distributed 77% of the claimed land titles and Odisha 71%. The data is derived from an answer submitted by the Government in response to a question in Rajya Sabha on July 20, 2022.

What this means is those tribal farmers tilling forest land are subject to evictions and harassment by officials, making them dependent on other means of survival. During the pandemic period, there were reports of increased evictions of tribals, further aggravating their plight.

Allocation of Funds for Welfare

A certain proportion of Central Budget funds are supposed to be kept aside and spent exclusively on welfare programmes for Scheduled Castes (SC) and Scheduled Tribes (ST). The earmarked funds are part of the Central Schemes and Centrally Sponsored Schemes. The proportion is determined by the proportion of SC and ST, respectively, in the total population. According to Niti Aayog guidelines of 2017, these proportions are 15.49% for SC and 8.2% for ST.

As the chart below shows, the actual allocation for tribals was a mere 4.9% in 2018-19, which has subsequently risen to 7.3% in the Budget Estimates for 2022-23, still short of the 8.2% mandated. This analysis, based on Budget documents, has been done by the National Campaign for Dalit Human Rights-Dalit Arthik Adhikar Andolan, an advocacy group for dalit and adivasi rights based in Delhi. 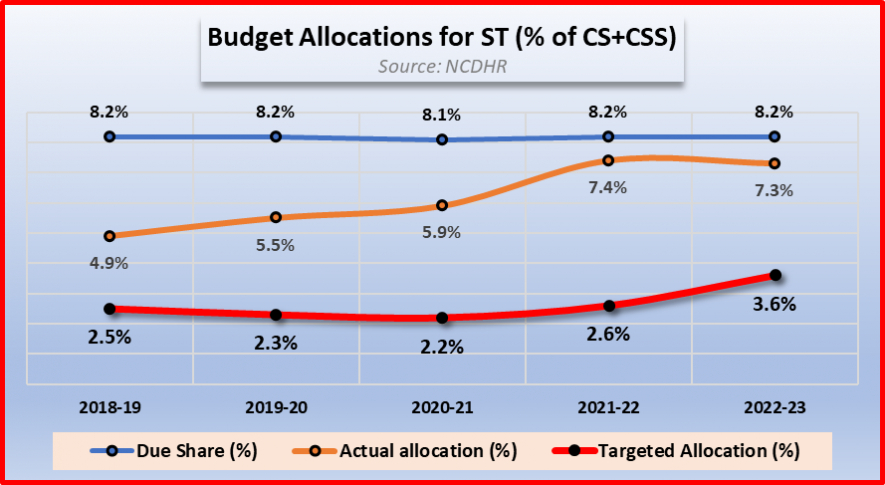 However, the situation is even more dire than this, as the rights groups point out. Many of the schemes that are shown to have the allocation for dalit and adivasi communities are actually general schemes; that is, they are not targeted at these two underprivileged and deprived communities. For example, the allocation for schools is a general scheme for the whole school-going population, which includes dalit and adivasi children too. It is argued that such general allocation is not serving the purpose of targeted schemes for the empowerment of these communities. An example of targeted schemes would be the post-matric scholarship schemes for dalit and adivasi students. Analysis done by NCDHR shows that targeted funds make up only 3.6% of the total funds, although this proportion should have been 8.2% for tribals.

This gross neglect has a direct effect on tribal lives – children are deprived of scholarships or vocational training, houses are not built, laws that protect against atrocities are not implemented properly, and so on.

According to data collected by the National Crime Records Bureau (NCRB) based on reports from states, 8272 cases of atrocities were reported in 2020, the last year for which crime data is available. That means there was a crime committed against an adivasi person nearly every hour, every day, through the year. Atrocities include all the crimes in the Indian Penal Code like murder, rape, causing grievous hurt etc., read with the Prevention of Atrocities Act (POA) which defines deliberate insults, discrimination, humiliation or dispossession from land, etc. as crimes.

The chart below, derived from NCRB data over the past five years, shows that there is a rising trend in such atrocities against adivasis.

The BJP-led State governments have shown scant attention to this heinous aspect of social life. It must be said that a similar situation prevails with regard to dalits.

While anything that lends a helping hand to this shocking condition of tribals would be welcome, unfortunately, mere symbolic actions are unlikely to bring about any change. After all, India’s outgoing President is a dalit himself, but that has not changed a lot for dalits in India. It is this unfortunate reality that leads one to conclude that the nomination and election of Droupadi Murmu are more of an electoral tactic of the BJP – and that it is unlikely to succeed. To bring about a positive change in the condition of dalits and adivasis, far more needs to be done, including creating employment opportunities, enabling skills among youth, providing land to these communities, filling the reserved posts in the government at State and Central levels and strict enforcement of the laws for their protection, among other measures.