The author, a student in JNU during Mrs Gandhi’s Emergency, was jailed under MISA. In this extract from a longer work on resisting political emergencies, he remembers life in jail in 1975. 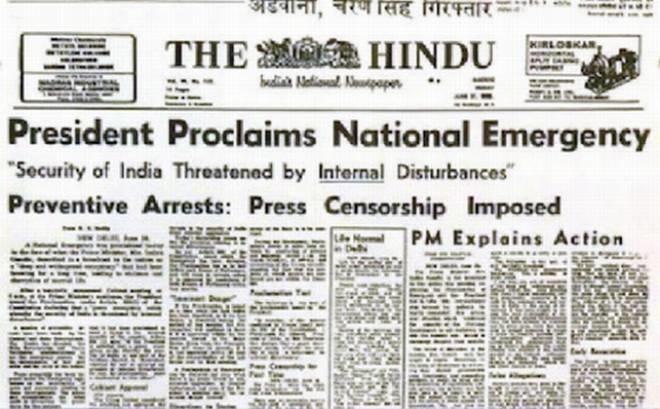 Tihar Jail was a very large prison, occupying about 65 to 70 acres. There were low barracks in each ward, all single-storey, with some grounds attached to each. Once the prisoners were let out during the day, we were not really cramped for space. In Ward 14, we were not in individual cells; it had two large barracks, with about 20 persons in each and one bathroom per barrack.

There was some classification of prisoners, who were divided into B (‘better class prisoners’), and C, or ‘ordinary’ prisoners. In Delhi, all political prisoners were in the ‘better class’ group. In the jails of Uttar Pradesh, that was not the rule, as I discovered when I was taken to Naini Jail in Allahabad for my master’s viva. Only a few were designated ‘better class’. As Indian jails carry significant class distinctions, particularly for food, it made a huge difference to the political prisoners detained in Uttar Pradesh. Better class in Tihar meant we got somewhat better food, prison-issued clothing, two blankets and even warm clothes in winter; on the whole, better facilities.

In Tihar, we were issued rations from the jail store, which we collected every day, and we were also allotted convicts—from those sentenced to serve with hard labour—to cook our food. We only had to supervise their cooking. There was a rota system for kitchen duties among us, which consisted of going with the convict labour assigned to the barracks to collect the day’s rations from the store and supervising the cooking. Some of our fellow inmates knew how to cook, so the food was not bad at all, particularly for me, used to long periods of hostel food! P. Ghosh, the additional magistrate who had signed my MISA warrant, was for a short period also supervising Tihar Jail. He asked the jail superintendent to arrange a meeting with me. During our talk, he wanted to know how the food was, and I told him it was better than JNU hostel food. The superintendent was very pleased till I explained, no, it was not a compliment to Tihar but a commentary on our hostel food.

Tihar is where I picked up some rudimentary understanding of cooking, not by cooking but simply observing how it is done. This was useful later in life, but of course, the doing is quite different from knowing the theory!

Those convicted to serve with hard labour found cooking for us a lighter duty, and they also shared our food. But the jail kitchen duty, cooking for two to three thousand people on an industrial scale in the summer heat of Delhi, was very hard indeed. And the food was bad, as the rations issued for the ‘C class’ prisoners were very, very poor. As I had shared the same food that ordinary prisoners got for a few days, I knew how bad it was. The rice and wheat had stones and, from the smell, were clearly rotten or stale. Again the question of class, even in jail.

There was a difference between those under rigorous imprisonment who had to do labour and those either serving simple prison sentences or under-trials. But here again, class made a difference. Even if you were convicted, you got ‘better class’ treatment in jail because of your status. If you were a graduate or paid income tax, you did not do hard labour. There was the famous case of an eye doctor, Dr NS Jain, who had conspired with others to kill his wife. He was convicted and also assigned prison duty. But his labour, or prison duty, was to look after the jail library.

Later, when I was shifted to Agra, I had to supervise the non-vegetarian cooking with another young student-activist from Bihar. Neither of us knew how to cook, nor did the convict labour assigned to us. It was then we had to start from scratch and work out how to cook by trial (and mostly error). Initially inedible—even our convict labour refused to eat it—our food grew to be just about edible by the end; a huge improvement!

The two barracks in Ward 14 were segregated politically, more by voluntary action than by the jailers who had assigned our barracks. One was the RSS-Jan Sangh barrack (yes, there were people—though few—in the Jan Sangh who did not identify as RSS), and the other was a very mixed bag: everyone who was not RSS-Jana Sangh. It consisted of the Jamaat-e-Islami, different shades of the left, including socialists, and those with no particular political affiliation, picked up by the police dragnet. They included Mam Chand, a newspaper vendor in Connaught Place, who stocked—as he told me—both the RSS mouthpiece, Organiser, and CPI(M)’s weekly, Peoples Democracy. Funnily enough, the paper for stocking which he was actually arrested was not one of these ‘subversive’ papers but Piloo Mody’s English weekly, March of the Nation, which could hardly be called subversive.

Mam Chand’s story figures in the Shah Commission Report, as he, a sole breadwinner with nine children, was arrested because of a complaint by Arjun Das, a municipal councillor in Delhi and one of Sanjay Gandhi’s hangers-on. The authorities admitted they had not read the ‘subversive’ literature discovered in his stall but signed the MISA order against him under instructions from the ‘PM’s house’. Putting a newspaper vendor behind bars was possibly a warning to others not to keep any papers or magazines critical of the government.

Ward 14 housed some important prisoners: Nanaji Deshmukh, Kanwar Lal Gupta, Arun Jaitley and Murali Manohar Prasad Singh. Later, DP Tripathi, the JNU Students Union president, joined us in the ward. Nanaji, a key RSS functionary, was the de facto second in command of Jayaprakash Narayan’s Total Revolution movement, a position JP made official at the Ram Lila Maidan rally of 25 June 1975, in which he declared Nanaji secretary of the Lok Sangharsh Samiti. This was also the rally at which JP asked government officials and the military not to obey ‘illegal and immoral orders’ of the government, providing Mrs Gandhi with an opportunity to claim that he was openly promoting sedition.

It was the nature of the JP movement that it had no core beliefs but was riding the wave of reaction to the Congress’s perceived corruption, aided by Mrs Gandhi’s drift towards a more authoritarian position. This period was also of Sanjay Gandhi’s emergence from a failed car-maker to a successful political entrepreneur under his mother’s umbrella. The open support of Mrs Gandhi’s government to Sanjay’s venture was not only a tale of violation of laws and government regulations—aided by Sanjay cronies like Bansi Lal—but of discord between Mrs Gandhi and her one-time private secretary, PN Haksar, as Jairam Ramesh details in his book, Intertwined Lives: P.N. Haksar and Indira Gandhi.

The Sanjay gang in the administration retaliated against Haksar with a raid on Pandit Brothers on 15 July 1975. Pandit Brothers, owned by Haksar’s uncle, had a landmark shop-cum-showroom in Chandni Chowk and another in Connaught Place. Officially, the raid and subsequent actions against the owner were for not displaying proper price tags. The 81-year-old uncle and a 72-year-old brother-in-law, KP Mushran, were arrested, though they were released on bail by the evening. The raid was organised by a special squad under the chief secretary. The charges were framed under the Defence of India rules. Apparently, India’s defence during the Emergency rested on proper price tags in shops!

Ward 1, which was larger, had a mixed bag of politics, mostly RSS-Jan Sangh people and socialists. In Delhi, the RSS-Jan Sangh was the major opposition to the Congress and had the largest numbers. Again, it was a mix of MISA detainees, with inmates from the RSS-Jan Sangh family such as Sunder Singh Bhandari (Jan Sangh general secretary), former mayor of Delhi Hansraj Gupta, future mayor Prem Sagar, and Ram Nath Vij; while the socialists included Surendra Mohan, Raj Kumar Jain and Vijay Pratap, and there was Hansraj Rahbar, the well-known leftist Hindi writer. Srilatha Swaminathan and Maharani Gayatri Devi were in the women’s ward, and though they had a small room to themselves, it wasn’t a ward for political prisoners. I met Srilatha fleetingly, on the sidelines of the weekly visit, mulakat, permitted to prisoners, but got to know her much better later, during the organisation of the World Social Forum, 2004, in Mumbai.

I had been in jail for about a month when DP Tripathi (DPT) was arrested. It meant I had a companion whose position was similar to mine. At this point, we functioned as some kind of CPI(M) voice inside the jail. Our separate mulakats netted us a range of information, so we were relatively well-informed about what was happening.

Kanwar Lal Gupta was an ex-MP from Delhi. He was friendly and outgoing. He and Arun Jaitley would sit with us—Murali Babu, DPT and me—and have conversations on a range of topics, including politics. Most were about the Emergency. As we were starved of news, we pooled our information from the once-a-week mulakat. Of course, it included a healthy dose of gossip and rumour, the staples of a censored society.

It might appear at first sight that the two barracks in Ward 14 were organised politically. But I discovered pretty soon there was a deeper reason for this division. Our barrack, though politically mixed, had one common factor—a non-vegetarian kitchen—while the other barrack had a vegetarian kitchen. It meant that vegetarian and non-vegetarian food was cooked in our barrack, while meat and eggs were strictly taboo in the other barrack’s kitchen. Food taboos go far deeper than politics: that is why they lend themselves so easily to the divisive use of food in politics that we witness today. Not that this is new, as the RSS and various other groups have been trying to politicise food, particularly bovine—cow and buffalo—meat, since the cow-protection movements of the late nineteenth century.

The other barrack, the RSS-Jan Sangh one, was strictly vegetarian. Some from the RSS-Jan Sangh were non-vegetarian and would come to eat with us. But the food that came during the mulakat—yes, mulakat meant that families could bring prisoners food—proved a problem for them. When the Jamaat prisoners had a mulakat, we would get really delicious food: mouth-watering biryani, pasanda, kabab and kofta. I don’t think I have ever in my life tasted food as delicious as what came during those mulakats. A number of these items were bada, meaning beef or buff. Most from the left had no problems eating beef or dining with people who ate beef. But our RSS-Jan Sangh non-vegetarians had a problem. As one of them explained: “Woh bade wala jo hai na, woh hamse chalega nahi.” Reluctantly, they turned vegetarian rather than eat with people who ate beef.