Discrimination is meted out to non-binary people in every sphere of their lives. Despite the NALSA and Navtej Singh Johar judgments of the Supreme Court, the shackles of historic discrimination faced by individuals with a different sexual orientation and gender identity are yet to be broken.

It is concerning to note that prejudice and societal stigma start as early as in school, where those students who are in the process of discovering the nuances of their sexuality, are harassed and bullied for not being ‘normal’. Without a rights-based policy, uniform anti-ragging regulations and an inclusive LGBTQI+ curriculum, it would be extremely difficult to protect young minds and save their lives.

In March, a Class X student in Faridabad, Haryana, was compelled to take his life because he was being bullied in school by students over his sexuality. He left a suicide note for his mother which stated, “I can’t live in this hateful world.” His mother, who is an art teacher at that school, told The Times of India: “Some students called him gay, stripped him in the school bathroom and misbehaved with him on school trips.” The mother had approached the school authorities on multiple occasions, and wrote several complaints and emails requesting them to take action, but the authorities remained callous.

School curriculums have no gender diversity

There is reason to believe that the Faridabad incident is not a one-off, even though, there are no all-India statistics available to indicate an increasing rate of suicide cases among LGBTQI students, especially when the National Crime Record Bureau is known to under-report cases of suicide among transgenders.

A 2018 study based on a survey of transgender people in Delhi and Uttar Pradesh, conducted by the Kerala Development Society and submitted to the National Human Rights Commission suggests:

According to the report, these are some of the possible reasons for members of the trans community not continuing their studies. “The staff and faculty of educational institutions are totally unaware of transgender issues“, the report highlights.

Moreover, the survey also reveals that about 92 per cent of the members of the community surveyed are highly deprived of the right to participate in any form of economic activity. They are totally invisible in all the spheres of economic activities. A low level of education and social exclusion limits their employment and livelihood opportunities. Several factors are responsible for their economic deprivation, as this table published in the report shows. 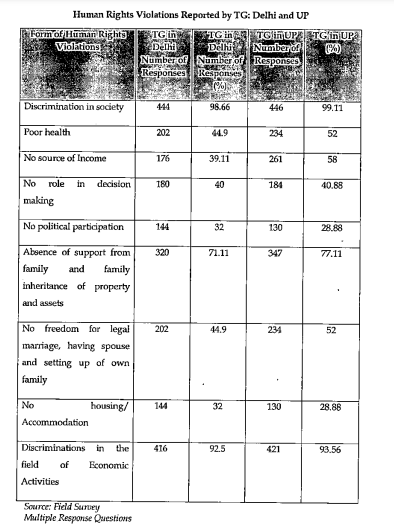 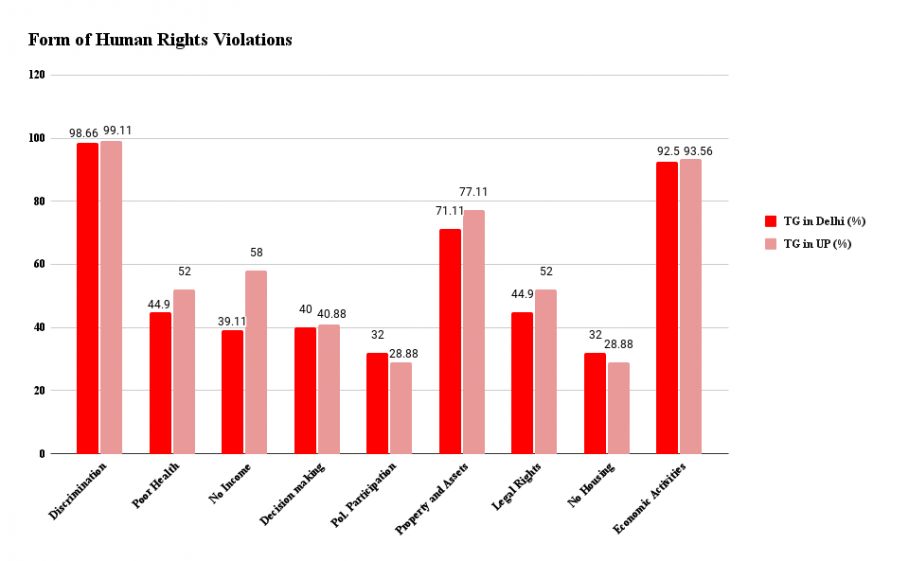 The Delhi-Uttar Pradesh survey discloses that it takes years for transgender children to understand that they are transgender and different from males or females. Most of them keep it a secret for a long time until they realise that it is impossible for them to hide it forever. When they communicate the reality to parents and family members, transgender children are likely to get unfair treatment. According to the report, most parents and family members consider transgenderism as a physical or mental defect.

The study finds that there are several cases of transgender people who have undergone severe mental strain and agony. By and large, transgender people are excluded from their families and do not get any support, including livelihood support, the report has concluded. Worse, transgender people face discrimination from the local community, neighbours and society as a whole. Almost all the respondents (99 per cent) who participated in the survey revealed that they had suffered social rejection on more than one occasion in the past.

It is, therefore, disappointing to find that currently, the school systems do not have LGBTQI+ inclusive curriculum. The National Council for Educational and Research Training (‘NCERT’) had, in 2014, introduced a new course for schools affiliated with the Central Board for Secondary Education, called “Human Rights and Gender Studies” for classes XI and XII, but the module hardly touches upon the issues of sexuality.

While it was expected that the new National Education Policy, 2020 (‘NEP’) would make some progressive and gender-inclusive changes in the educational system, the policy is known more for its rhetoric than substance. It covers transgender students within the category of socio-economically disadvantaged groups, and limits itself to issues like access to education, sanitation and the need for gender-neutral toilets. It establishes a Gender-Inclusive Fund to address these concerns. But it does not realise the fact that transgender students are discriminated not just based on their social status as a marginalised group. The other crucial and obvious factor is their sexuality, which has been ignored.

The NEP restricts the need for special educators to students with disabilities. LGBTQI students need special educators, too, for basic needs such as knowing the right pronoun to be used. The NEP nowhere mentions the real hindrances faced by LGBTQI students to access their right to education as enshrined in Article 21A of the Constitution read with Section 13 of the Transgender Persons (Protection of Rights) Act, 2019. Section 13 puts an obligation on educational institutions to ensure that education is accessible to all without any discrimination.

Last year, the NCERT redacted its ‘gender-diversity’ teachers’ training module titled ‘Inclusion of Transgender Children in School Education: Concerns and Roadmap‘ after the drafters faced criticism and their credentials were questioned by different fringe groups. The National Commission for Protection of Child Rights (‘NCPCR’) chairperson Priyank Kanoong had written a letter to the NCERT, urging it to rectify the ‘anomalies’ as it would expose students to “unnecessary psychological trauma”. The idea of removing binaries, he said, would contradict the idea of creating an inclusive environment. The complaint to the NCPCR was made by Vinay Joshi, a former Rashtriya Swayamsevak Sangh member. On being asked about the NCERT module, he told The Hindu: “If an individual student is intersex or feels any gender confusion, they can get the medical and psychological help that is needed. But it is absurd to create senseless confusion in a whole generation of young people in this way.” Several LGBTQI groups and individuals had written an open letter to the NCERT to retrieve the module but to date, there has been no official response to it.

School systems do not have a uniform anti-ragging policy

Apart from the lack of gender diversity in school curriculums, there is a lack of uniform anti-ragging policy to address these issues of students being harassed and compelled to harm themselves or attempt suicide. Where universities across India follow the University Grant Commission’s (‘UGC’) ‘Regulation on Curbing the Menace of Ragging in Higher Educational Institutions, 2009’, there are no such guidelines for schools.

Often, students are unable to reach out to the concerned person for help and there is a reluctance from civil society as well to help them. Members of non-government organisations (‘NGOs’) are limited in their capacity to help out these students who are bullied because of their apprehension that they might be booked under the stringent Protection of Children from Sexual Offences Act, 2012 (‘POCSO Act’). Indrajeet Ghorpade, who runs a digital LGBTQI advocacy platform called ‘Yes, We Exist‘, told The Hindu that the POCSO legislation, which gives out punishment for sexual assault and aggravated sexual assault of a child, could be used against members of civil society by such parents or guardians who are reluctant to accept the sexuality of their children, and feel that NGOs are trying to ‘brainwash’ their children.

Indeed, there is a consensus among experts that the lack of sexual orientation and gender identity (‘SOGI’) -inclusive curriculum and anti-ragging guidelines can only be addressed through a rights-based policy. Such a policy will put positive obligations on the school administration to ensure that there are enough SOGI-based counsellors to offer gender-sensitization training for students to understand issues relating to their sexuality and its related concerns.

Further, a step ahead of this would be to also include members of NGOs and civil society who are working for the rights of LGBTQI children to organise various school-based awareness workshops. These workshops would train students to approach the various concerned persons such as teachers, members of the NGOs, and police when they feel unsafe. Often, due to the lack of any legitimate means to ensure their safety, most students end up on social media where information is mostly unregulated.

However, at present, at the school level, gender-sensitization training is completely missing. The UGC’s gender sensitization training, for instance, is limited to the Sexual Harassment of Women at Workplace (Prevention, Prohibition and Redressal) Act, 2013. The UGC has no guidelines for ensuring the safety of LGBTQI students at the university level. The UGC implemented Saksham Guidelines for ensuring women’s safety in universities in 2013. Interestingly, the guidelines have a stereotypical understanding of transgender persons as those “who may not approximate the dominant gender ideals.” These guidelines were amended in 2016 to make them inclusive of transgenders as per the Supreme Court’s NALSA judgment of 2014. But the amended guidelines look like the word ‘transgender’ has been copied and pasted alongside the two other genders, without any other changes. The guidelines remain women-centric.

The Expert Committee on issues related to transgender persons, constituted by the Union Ministry of Social Justice and Empowerment in 2013, had suggested a systematic overhaul of the school education system to integrate LGBTQI students in line with the vision of The Right of Children to Free and Compulsory Education Act, 2009.

In 2017, Kerala opened a special school for LGBTQI students – a move which was hailed by the transgender community on the ground that they drop out of mainstream schools at a very early age because of the prejudice they face from the people around them. While the intention of opening this school was considered noble, the ultimate aim, according to activists, should be to integrate transgenders into society.

The Leaflet has reported on issues concerning the rights of the LGBTQI community regularly, and continues to explain new issues faced by the community. Why are Indian courts taking so long to legalise same-sex marriages? Do same-sex couples have the right to marry? Does the Surrogacy (Regulation) Act, 2021 discriminate against LGBTQI persons? How have courts dealt with PILs seeking reservations for transgender persons in public jobs? Why does the withdrawal of advertisements for celebrating Karva Chauth by sexual minorities make no sense?

Below are some of the highlights of The Leaflet’s coverage of LGBTQI issues.

Our most recent coverage

Can the Hindu Marriage Act be interpreted to allow same-sex marriage?

The Madras High Court, in the case of Arun Kumar versus Inspector General of Registration (2019), analysed the legitimacy of cis-trans marriage with regards to the Hindu Marriage Act (‘HMA’) specifically, and held that the same would be legally sound. For the purposes of this, the court had taken into consideration Section 5 of the HMA and analysed whether the term ‘bride’ would include a transgender woman or not.

The mental health concerns of the LGBTQI community were among the concerns of the Supreme Court in Navtej Singh Johar versus Union of India (2018) which decriminalized homosexuality in India. The Supreme Court in that case considered global psychiatric scholarship which showed that there is a clear correlation between the political and social environments and the mental health of an individual, and that persecutory laws against LGBTQI individuals lead to greater levels of depression, anxiety, self-harm and suicide.

Increasing acceptance by the judiciary

Despite the NALSA judgment, members of the LGBTQI community in India face structural discrimination in various spheres of their lives. They still have to face the constant struggle to be recognised by mainstream society. The lack of safe spaces, gender-neutral toilets and lack of access to education are some of the hindrances faced by this community.