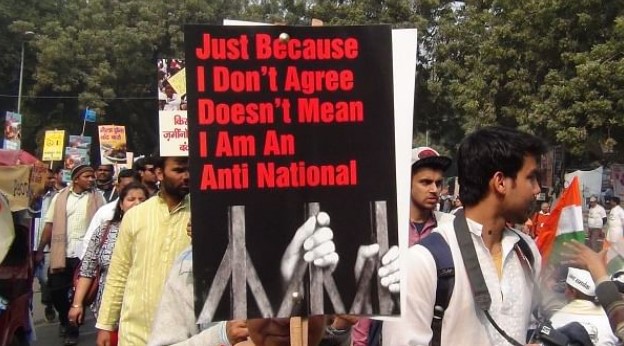 Following the 1857 so-called Great Indian Rebellion during the rule of the East India Company, British monarch Queen Victoria, issued a proclamation in 1858 that India would be governed by and in the name of “the Crown”. Thus, the British territory of India (the State) and the British Government of India, were embodied in the British Monarch.

An Indian subject who expressed disaffection by conduct or speech, was threatening the Crown by inciting people to rebellion. That was the reason for enacting Sec.124A of the IPC in 1860. The law defined sedition and prescribed punishment for sedition against British rule. The British jailed many freedom fighters, notably Bal Gangadhar Tilak and Mohandas Karamchand Gandhi, for sedition.

We the People of India promulgated the Constitution of India on 26 January 1950, creating the sovereign, democratic Republic of India as a Union of States. The Indian State is the sum of India’s people with their social, cultural, natural and economic resources, living and working in accordance with the values and tenets of the Constitution. The People elect their representatives to central and state legislatures. These people’s representatives form the central and state governments from among themselves, with some of them becoming ministers to run the government and rule the country in the name of the People.

In 1958, the Allahabad High Court and the Punjab High Court declared Sec.124A void, and struck it down. However, in Kedar Nath Singh v. State of Bihar (1962), the Supreme Court, upheld Sec.124A, but read it down, to make sedition applicable only if there is violence or incitement to violence.

Today, 162 years later, Sec.124A remains in force. Successive parliaments and central governments have failed to repeal the law, elected governments retain the powers of the erstwhile British Crown. Over the decades, central and state governments have (mis)used Sec.124A to suppress and punish dissent and freedom of speech and expression, not unlike the British.

FIRs based on Sec.124A, have been filed, accusing people demonstrating peacefully, or dissenting with government policies, etc., or making “derogatory” comments about ministers by words or cartoons, and even against persons who were yet to make a statement/joke or make a report. None of these can reasonably be interpreted as incitement to violence, but governments view these as seditious threats to governments or the State.

Reportedly, sedition charges were filed against 13,000 people between 2010 and 2021, and most of them languish in jail, for nothing more than exercising their freedom of speech and expression. According to MHA data, in 2019 alone 93 sedition cases were registered, and analysis of NCRB data shows that from 2016 to 2019, sedition cases increased by 160% while the rate of conviction fell from 33.3% to 3.3%.

During the peaceful demonstrations at the Koodankulam (Tamil Nadu) nuclear power plant, on 10 September 2012, movement leaders and others were charged with sedition and “waging war against the country” – 8,956 people were charged in 21 cases of sedition. Of 380 FIRs lodged, 240 were withdrawn in October 2014 following a Supreme Court order. [The Indian Express; https://indianexpress.com/article/india/india-news-india/kudankulam-nuclear-plant-protest-sedition-supreme-court-of-india-section-124a-3024655/;]. Such large-scale charges of sedition were politically motivated, to crush the protests.

There is more similar data, but little difficulty in understanding that these indicate selective, ill-motivated, deliberate misuse of Sec.124A, for political or personal purposes.

There are nine petitions challenging the Sedition law, clubbed together for consideration of the Supreme Court, with Union of India (UoI) as Respondent. Until 7 May 2022, during hearings, UoI was arguing in defence of the law.

However, on 9 May, UoI altered its stance. UoI’s Affidavit filed in Court, stated that although “there are [sic] divergence of views expressed in the public domain”, the need for the law was “generally accepted by everyone in legitimate state interest” [of] “dealing with serious offenses … affecting the [country’s] very sovereignty and integrity”.

UoI’s Affidavit also stated that “Hon’ble Prime Minister of India has … expressed his clear and unequivocal views in favour of protecting civil liberties” … and “we need to … shed colonial baggage [the Sedition law]”. Accordingly, the government “has decided to re-examine and re-consider” the law “before the Competent Forum”, and the “Court may not invest time in examining the validity of Sec.124A once again … and await the exercise of reconsideration … before an appropriate forum”.

The Court observed in its Interim Order that UoI agreed that “the rigors of Sec.124A … is not in tune with the current social milieu” … since Sec.124A pre-dates the Constitution and … “was intended for a time when this country was under the colonial regime”. Further, that “till the re-examination of the provision is complete, it will be appropriate not to continue usage of the aforesaid provision of law by the Governments’ ‘.

The Court’s Interim Order concludes with: # Continuing the interim stay granted on 31.5.2021 in two Petitions; # Directions restraining State and Central Governments from registering fresh FIRs, continuing investigations or taking coercive measures under Sec.124A; # Requesting Courts to take the present order into account while examining reliefs sought by affected parties in fresh cases; # All pending trials, appeals and proceedings concerning Sec.124A be ‘kept in abeyance’; and # UoI may issue Directive to State Governments/Union Territories to prevent misuse of Sec.124A. All these apply until further orders are passed. The Court ordered listing the Petitions in the third week of July 2022.

Note: The general is one of the Petitioners among the ongoing sedition cases in the Supreme Court, and admits his position as a layperson in constitutional law and legal matters.

First published in The Citizen.
Major General S.G.Vombatkere (Retd), VSM, was commissioned into the Corps of Engineers in 1962, and retired in 1996 from the post of Additional DG in charge of Discipline & Vigilance in Army Headquarters, New Delhi.