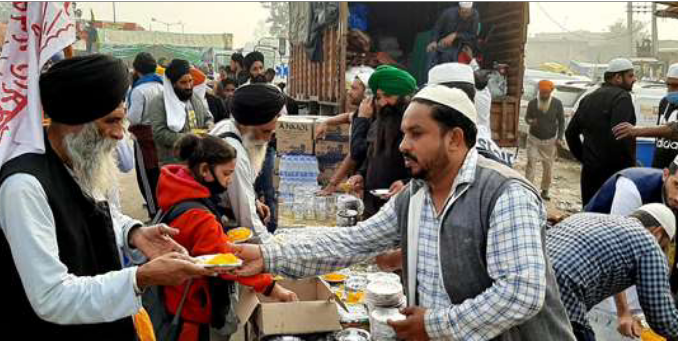 After a year-long historic farmers’ movement against the anti-farming and anti farmer laws brought by the central government, Prime Minister Narendra Modi on 19th November announced the repeal all the three laws, which was the main demand of the movement. Now Parliament has also passed the Farm Laws Repeal Act and these laws are formally repealed. The government was not ready to listen to the farmers’ voice under the influence of corporates, but due to the pressure of the farmers and the public the government had to bow down. During such a long period, there was no dearth of courage and will power of the farmers and they remained on their fronts with full enthusiasm till 11th December when Samyukta Kisan Morcha (SKM) decided to return.

If we look at the different aspects and dimensions of this movement, we will see many features. One of its distinguishing features was that it rose above religious-caste identity and become all-inclusive. The reflection of the idea of secularism enshrined in the Indian Constitution is clearly visible in this movement. Today, when the country is going through the worst phase of identity-based division, in such a situation, this movement showed the values of fraternity which emerged out of the freedom struggle and became the identity of our nationality.

After independence secularism was adopted in the Constitution by our country; it marked the separation of religion from politics and respect for all religions. Different religious, ethnic, regional, linguistic, social identities gave a unique single identity to the country through the idea of ‘Unity in Diversity’ and by adopting the principle of treating all religions, creeds, communities with equal eyes and giving equal respect to all. In this era, when propaganda is being done to increase mutual distance by spreading venom in the name of religion and caste at the behest of the ruling classes, at such a time, this movement has worked not only for saving agriculture but also to save the democratic and secular principles of our Constitution.

On 5th June 2020 when these laws were brought in the form of ordinances, the farmers started opposing them. Because these laws were going to affect farmers of all the communities, so the farmers of all communities were against these laws. Therefore, they collectively stood up and became a part of this movement. On 26thNovember 2020, when the farmers with the slogan of ‘Chalo Delhi’, marched towards the nation’s capital, all the farmers belonging to different organisations and ideologies, crossing the huge hurdles erected by the BJP governments, reached the borders of Delhi.

When reports of various news channels and newspapers started coming from ‘Singhu Border’, the first front of the farmers on the border of Delhi, there were pictures of the ‘Zarda Pulao’ (sweet rice) Langar set up by youth belonging to the Muslim community of Malerkotla. In this Langar sweet rice was being served throughout the day to the thousands of farmers present at the front, and this continued up to the last day of the struggle. This was one of the many Langars on the front and Muslim farmers were also present along with the farmers of all other communities. Hence this Langar became a symbol of unity among all the communities. At times when the forces in state power are continuously increasing bitterness all over the country, this sweet rice is increasing the sweetness in mutual relations, and is disrupting the plans of the rulers.

Holi, Diwali, Eid, Guruparv, Baisakhi, Teejwere all the festivals celebrated together at all the protest sites around Delhi. The Navami feast of Navaratri and the feast of Iftar were held together. These days, when hatred is being served by polarizing festivals of different religions by different political interests, our tradition of celebrating all festivals and revelries together was carried forward on these Dharnas. Our tradition of celebrating all the colours, fragrances and festivals together revived on these fronts. Certainly, these rituals are visible all over the country; it is not just the specialty of this movement; but in this era when harmony is under intense attack, the emergence of this tradition brings positive energy to the nation, society as well as this movement.

During this movement, on Mahashivratri, instead of offering Kavad Jal to Lord Shiva in the Shiva temples of respective villages, soil and water was brought over from the villages of Haryana and offered on Shaheed Vedi at Singhu and Tikri borders. The same stage where Gurbani can be heard in the morning, Bhajanas were being played during the day and in the evening Azaan would reverberate in the ears. This movement is showing a ray of hope when the people of the country are being pushed towards conspiracies of division in the names of temples and mosques.

Seven years ago, in Muzaffarnagar, where the BJP paved the way for its political grow thin western Uttar Pradesh in the heat of communal riots, today the peasant movement has written a new chapter of religious unity. During the Kisan Mahapanchayat, hundreds of villages of both Hindus and Muslims made arrangements for the lakhs of farmers who came from all over the country to participate in the Mahapanchayat. People belonging to every caste and religion from different states took part together in this Mahapanchayat. Food, water, shelters were arranged by both Hindus and Muslims for them. Along with this, the slogans of “Har Har Mahadev – Allah Hu Akbar” from the stage strongly showed the secular essence and direction of this movement. 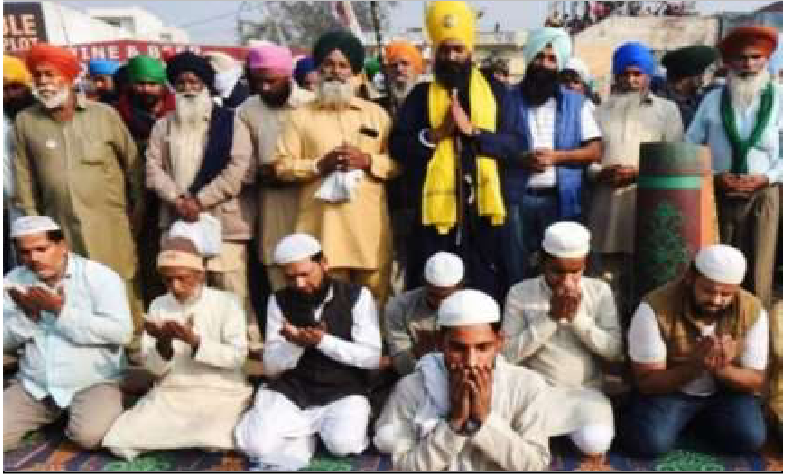 Attempts were made by BJP-RSS to isolate this movement by linking it with one community, but in this also they failed miserably. At first, they tried to link this movement with Sikhism and described it as their movement only; then it was claimed that the movement was limited to Punjab only. After this it was presented as a movement of Jats; it was depicted as a movement of certain areas and communities. The Samyukta Kisan Morcha, the platform under whose leadership this movement was going on is constituted by more than 500 farmers’ organizations, which shows the broad nature of this platform.

Certainly, most of the people sitting on the borders of Delhi in this movement were from the nearby areas of North India, because they are from nearby areas and continuously large participation from distant states was also not possible. But there is no doubt that this was an all-India movement and solidarity actions with the central demands of movement took place in every state. Many teams of farmers came to the Delhi borders from distant states. No matter how many attempts were made by the class enemy to malign this movement and break its unity, but every time they failed. It is a tribute to the understanding and clear vision of the leadership and the farmer agitators that this movement has been able to beat all the tricks of the ruling classes.

First published in The Beacon.
Manoj Kumar is a member of the All India Kisan Sabha (AIKS) and was active in the farmers’ movement against the farm laws.