Media in India: Shackled and Spied on

On World Press Freedom Day, an examination of irksome new regulations being enforced on the Indian media, and the challenges and opportunities arising especially in the digital domain. 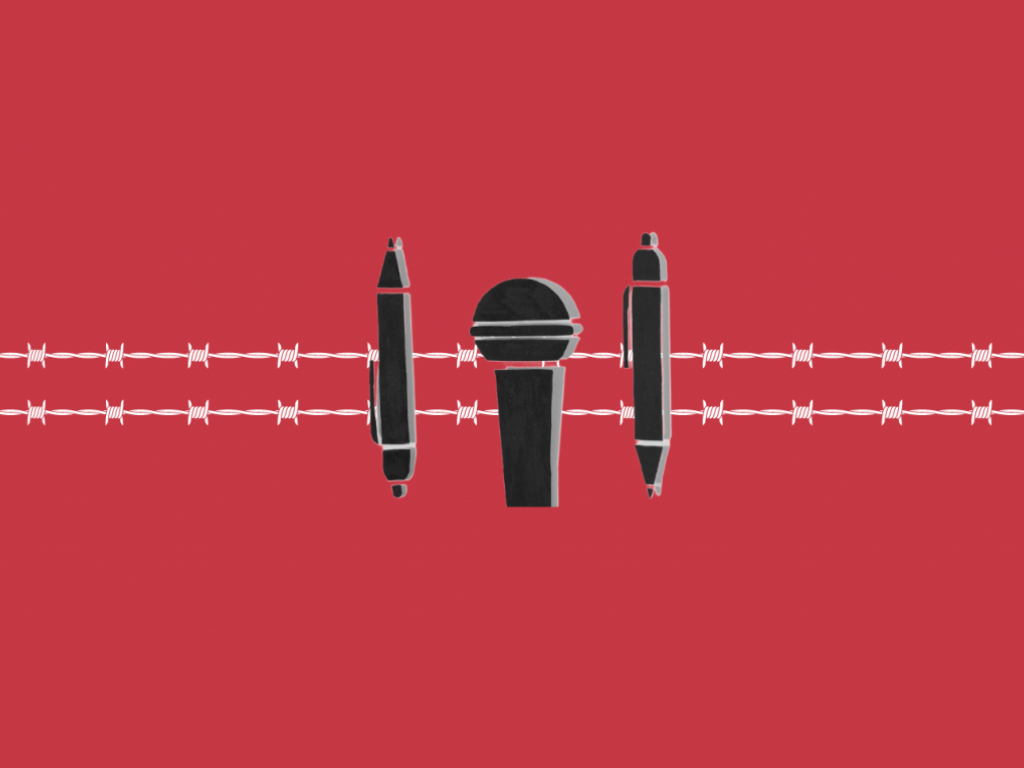 Early in April, the Union Ministry of Information and Broadcasting [MIB] ordered 22 YouTube channels blocked, 18 based in India and four in Pakistan. Also blocked were four social media accounts and one news website. Later in the month, another 16 YouTube channels were blocked, ten in India and all others in the neighbouring State, alongside one Facebook account.

The authority for these orders came from the Information Technology (Intermediary Guidelines and Digital Media Ethics Code) Rules promulgated in February 2021, framed under the Information Technology Act, 2000 [IT Act]. Under Rule 16, the Secretary in the MIB, on the advice of an “authorised officer”, can order that “public access of any information or part thereof through any computer resource” be blocked in situations of “emergency”.

No specific emergency is cited in either of April’s orders, but the MIB does invoke the compelling circumstances of national security, public order, communal harmony and most curiously, friendly relations with foreign States. All these are permissible grounds for restraining the free speech right under the Constitution.

In a landmark ruling in 2015, the Supreme Court struck down Section 66A of the IT Act on grounds of over-breadth since it permitted criminal action against individual users of digital media on vaguely defined grounds. At the same time, the court upheld Section 69A of the IT Act, which is narrower in scope and adheres to the grounds specified in the Constitution to mandate the blocking of digital media content by the Union Government.

Yet, judicial precedent on the “reasonable restrictions” on free speech is very poorly developed. Particularly befuddling are the circumstances in which “friendly relations with foreign states” could be invoked as a ground for restraints. Ironically, friendly remarks about the foreign State immediately to India’s west have in recent times been grounds for sedition charges, as with three Kashmiri students arrested in October and held six months for the crime of cheering the wrong cricket team.

The MIB decisions of April deserve attention since they are the first significant actions taken under the February 2021 rules. Among other things, these rules enjoin a three-tier system of regulation on all publishers of digital content. Portrayed as self-regulation mandated by law, with all the self-contradiction implied there, the system betrays its true intent in the constitution of its highest tier. Decisive authority here is wielded by a body of purely bureaucratic provenance. The rules also raise to statutory status certain ethical codes evolved over the years, and assign to the bureaucracy the power of imposing sanctions when a perceived breach occurs.

RULES CONTINUE TO BE USED IN SPITE OF BEING UNDER CONSTITUTIONAL CHALLENGE, PARTIAL STAYED

A number of petitions have been filed against the Rules at high courts across the country. Digital news outlets that had reason to fear summary and arbitrary administrative sanctions, sought injunctions. The high courts initially declined a stay on the rules in their totality, but were willing to grant injunctions against coercive action when specific requests were made.

The Bombay High Court in August (in response to a petition filed by this outlet), and the Madras High Court the following month, stayed two clauses of the new rules, 9(1) and 9(3), which enjoined a statutory code of ethics on all publishers in the digital format, and created the three-tier system of supervision. In handing out its ruling, the Madras High Court spoke of the need for “abundant caution”, since the envisaged mechanism could “rob the media of its independence”, resulting in “the fourth pillar…of democracy” ceasing to exist. The court also noted that the union government counsel present at the hearing, had conceded that the ruling would apply all over the country.

Despite the judicial caveat, the government has been proceeding in seeming confidence that they are already fully empowered under the Rules. In January, the MIB was revealed to have issued notice to several media outlets for alleged non-compliance.

Though with obvious reluctance, media outlets, meanwhile, have been forming the self-regulatory bodies required as part of the second-tier of the new oversight system. It is a further twist to the concept of self-regulation that all these bodies are subject to approval from the MIB. And the process of granting official sanction has been opaque, unresponsive to inquiry from stakeholders, and almost entirely a bureaucratic privilege.

Digital media outlets have also been in some part, complying with the need for an internal mechanism, as the first tier of addressing possible public grievances. These were little else than precautionary moves to pre-empt possible harassment by a regime not particularly well disposed towards independent media.

Yet, it is not as if the government has needed the prop of the new IT Intermediary Rules to exert arbitrary authority. In February 2020, the Kerala-based news channel MediaOne was ordered off the air for 48 hours, for its coverage of the Delhi riots, particularly for the way it “highlighted the attack on places of worship” and took sides with “a particular community”.

In January this year, the MIB declined to renew the channel’s licence, citing unspecified security concerns. The ban was stayed by two days, but later upheld after security agencies submitted evidence in a sealed envelope before the Kerala High Court. Though consistent with judicial practice from less enlightened times, this opaque system of justice delivery is something that the Supreme Court has sought in recent times to actively discourage.

In a later hearing, the Supreme Court rebuffed the government’s effort at opacity and restored the broadcast to the air, while reserving judgment on providing the channel access to material placed before it.

April’s spurt in the coercive application of Rules yet to clear the threshold of judicial scrutiny, is part of a continuum. A global consortium of media organisations in July last year broke the story of a surveillance operation involving some 50,000 mobile phones spread widely across the world map. The tool of choice was Pegasus, a spyware of Israeli origin. As reported in The Wire, a news portal based in Delhi, some 1,000 of these numbers belonged to journalists, civil rights activists and public figures in India.

Pegasus and another software, Netware Remote Access Trojan, were involved in the planting of incriminating evidence on devices belonging to targets, among them several of the accused in a case involving a violent affray in the western Indian city of Pune in January 2018, better known as the Bhima Koregaon case. It was found later that many of these individuals had been placed under surveillance a few months before.

Influence operations over social media were a vital part of the campaign strategy that brought the Bharatiya Janata Party to power in 2014. That effort at dominating the information space has been an integral part of its governance style since. In its first four years in office, the Narendra Modi government made at least seven separate attempts to set up an agency – variously described – with the mandate to monitor citizens’ social media activity and where possible, influence public attitudes.

In 2015, the MIB floated tenders inviting bids to set up and maintain a “social media communications hub”. The stated purpose was to ensure that citizens were able to access a regular flow of information about the government’s most important programmes. But a clear propagandist intent was evident in the object of enhancing the “reach of content on internet and social media sites” and finding ways of “making the uploaded content viral”. A surveillance intent was likewise expressed in the object of monitoring “individual social media users and accounts”, “social media sentiments”, and “overall trends on various social media platforms”.

That effort lapsed but was renewed under a new guise repeatedly in the following years. A request for proposals floated in April 2018 invited applications for creating a social media communications hub that would among other things, “support easy management of conversational logs with each individual … to help facilitate creating a 360-degree view of the people who are creating buzz across various topics”. The system should allow room for “influencers” of opinion who could initiate conversations across the country, for purposes that could include the cultivation of “nationalistic” feelings.

In hearing a public interest petition filed by an opposition Member of Parliament on the matter, the Supreme Court asked the government if it had in mind a “surveillance State”. Though counsel pleaded that only legitimate purposes were sought, the proposal was soon afterwards withdrawn. In October 2020, the government returned once again to the fray, with an invitation for “expressions of interest” in a facility that could “track social media, monitor social media sentiments”, segregate “problematic” from “non-problematic” activity, “make content go viral, and perform a range of other activities”.

Overt and covert means have been deployed in the effort at full spectrum dominance of the information space. Some have operated under the cloak of legality, using Rules yet to be assessed for conformity with the constitutional rights. And the commandeering of network connectivity speaks of an ambition to gain total control. The seeming pluralism of the new information universe is obviously no deterrent to a persistent attempt by the Indian government to establish itself as the singular authority that must be heard above all else.

First published in The Leaflet.
Sukumar Muralidharan teaches at the Jindal School of Journalism and Communication in the Delhi region. He has been a journalist and journalism instructor for over three decades, working mostly in the print media.