The Karnataka High Court on Tuesday, March 15, dismissed the petitions filed by Muslim students challenging the order of the Karnataka government banning the wearing of hijab in classrooms. The court upheld the ban stating that the wearing of hijab does not form essential religious practice under Islam. While the students have challenged the High Court’s decision, the judgment is widely being criticised on several grounds.

The central question is — do women in India have the autonomy to choose their faith, the way they want to dress and to express their beliefs? 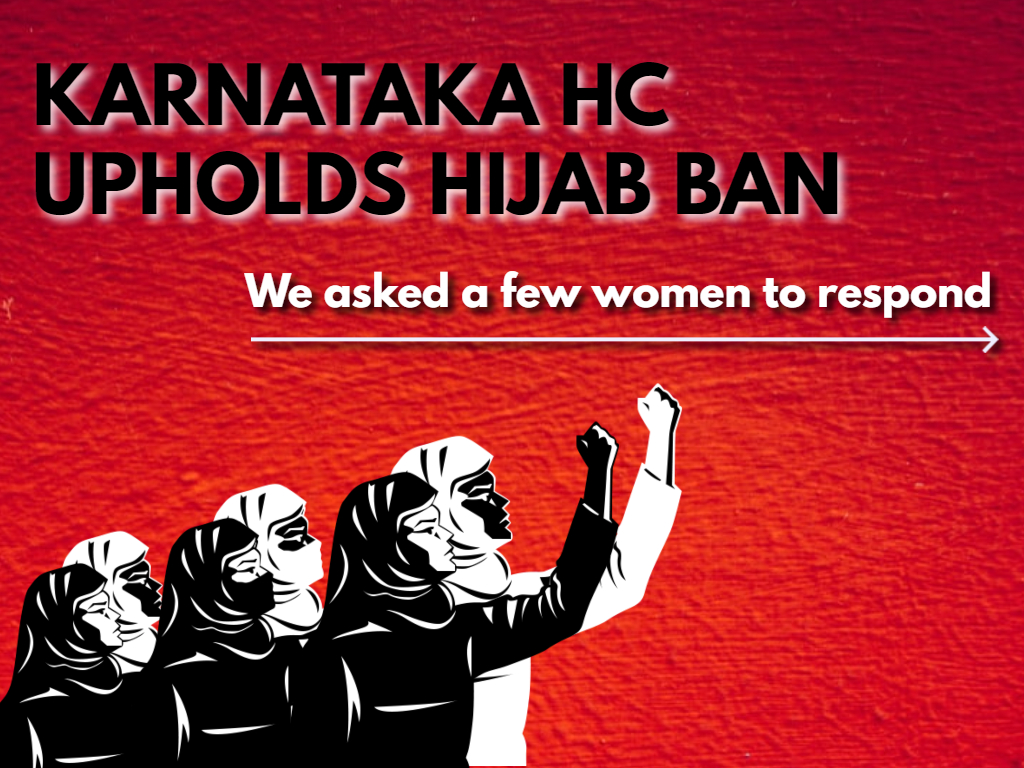 The Karnataka High Court order goes on to upholding yet another Hindutva attack on Indian Muslims. From brutal lynchings to stopping Muslims from offering namaz in public spaces, to forcibly closing Muslim eateries, the attacks on Muslims have been unrelenting. The stay puts a stamp on the project of assimilation and the forced erasure of distinctive markers of identity. I must say that it’s a pity Sikhs as a minority are not standing up for Muslim’s religious freedom. If there is any religious minority community not being willfully attacked by Hindutva forces, it is the Sikhs. Sikhs’ silence over Muslim women’s right to wearing the hijab, much like the turban worn by Sikh men and many amritdhari Sikh women, is extremely disappointing.

The Karnataka high court judgement is a blow against the right to education without discrimination guaranteed by the law and the constitution. Its immediate effect is to drive young Muslim women away from educational institutions. It must and should be appealed against. Wearing a headscarf is a common practice across India. It has never been considered a violation of the rule of a common uniform or a cause of inequality or a law and order issue. This is manufactured by Hindutva forces with the patronage of the BJP Govt. I strongly oppose the judgement. I hope the Supreme Court will reverse this injustice.

There are many concerns over the Karnataka High Court judgment today that upheld the ban on hijab. What sprang to mind immediately is how this will have a very negative impact on access of Muslim girls and women to education and work. This is a worry.

The Karnataka High Court judgement today upholding the ban on hijab is yet another excuse for the men in our country to push women back into the four walls of the home and away from education. It’s been happening since the 19th century.

It’s an outrageous judgment denying the right of young women students to adopt ways of dressing and thinking as autonomous people who have chosen to be who they are and wish to be. Its a deeply patriarchal judgment that believes in regulating women of a specific community to make them conform to the authority of the executive taking recourse to uniformity as defined by a few people who are playing majoritarian games over those who wish to study and choose to wear what they wish to wear and pursue their education.
I hope the Supreme Court will stay the order and apply its judicial reasoning in ways that will respect the autonomy of women and allow them to be who they want to be.

The decision to uphold the ban on young women students wearing the hijab needs to be seen in the context of an increasing display of majoritarian symbols in the public domain and concepts used in the political vocabulary at the highest levels. The controversy around the wearing of hijab is yet another step towards polarisation along religious lines and is likely to result in the denial of education to Muslim women and girls. The selective application of law in the name of banning religious symbols is unacceptable. The right of women/individuals to dress as per their choice must be respected by all, be it the courts or fundamentalists of any hue.

The Karnataka High Court judgement is not unreasonable in and of itself. Twenty years ago, Muslim girls attending schools requiring uniforms did not wear or ask to wear the Hijab. The growing popularity of the Hijab and asserting the demand to wear it must be understood in a broader socio-political context: it has become a symbol of resistance to the erosion of our secular and pluralistic culture, of religious freedom, and to the concerted attacks on Muslims and the vilification of the entire Muslim community. Young Muslim women are now, sadly, at the frontline of this resistance.

It is true that hijab is not an essential practice. However, constitutional rights provide for freedom of choice and conscience which is not about religion alone. Conscience regarding universal human values evolves out of influences of life experiences. Forced uniformity can only block it.

The current hijab controversy and the Karnataka state governments actions upheld by the high court judgement today demonstrates the hollowness of the ruling regime’s avowals of promoting gender equality and young women’s right to education and to choice. It is a further vitiation of our secular fabric through communal terror, focusing on limiting young women’s, particularly young Muslim women’s choices.

The judgement allowing the ban on hijab is blatantly communal and in violation of Muslim women’s constitutional rights to education and to equality. It discriminates against them as Muslim and as women. It violates their right to choose how they dress and their right to privacy and autonomy in the garb of allowing a school dress to be prescribed. The hijab in no way interferes with the school uniform or education but is an addition like a turban or a tilak.

Divorce and Democracy: A History of Personal Law in Post-Independence India