Beastly Tales from Here and There

Since they were first published in 1992, Vikram Seth’s glorious animal fables in verse have delighted young and old alike. Familiar characters in a magical new form-like the tortoise who outran the hare and the monkey who outwitted the greedy crocodile-take their place beside a freshly minted gallery of brilliantly quirky, comical creatures. Of the ten fables told in Beastly Tales from Here and There, two come from India, two from China, two from Greece, two from the Ukraine and two, the author tells us, directly ‘from the land of Gup’.

The following is the poem ‘The Crocodile and the Monkey’. 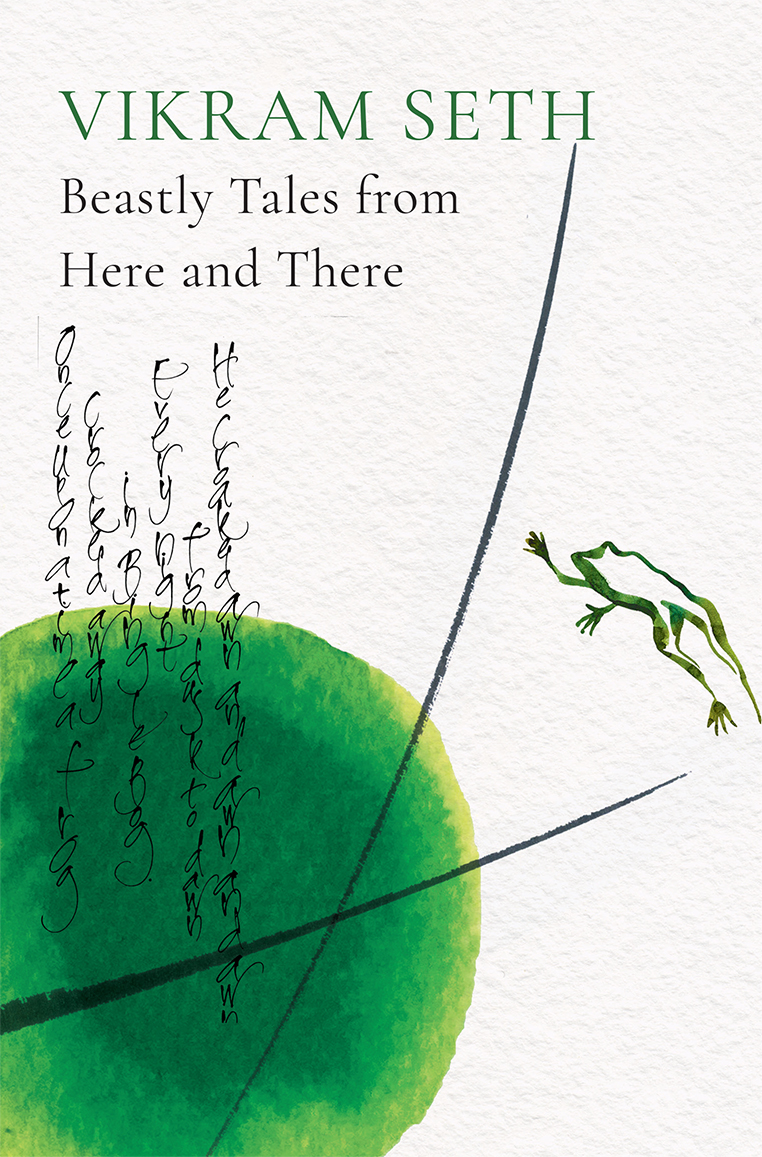 The Crocodile and the Monkey

On the Ganga’s greenest isle
Lived Kuroop the crocodile:
Greeny-brown with gentle grin,
Stubby legs and scaly skin,
He would view with tepid eyes
Prey below a certain size–
But when a substantial dish
–Dolphin, turtle, fatter fish–
Swam across his field of view,
He would test the water too.
Out he’d glide, a floating log,
Silent as a polliwog–
Nearer, nearer, till his prey.
Swam a single length away;
Then he’d lunge with smiling head,
Grab, and snap, and rip it dead–
Then (prime pleasure of his life)
Drag the carcass to his wife,
Lay it humbly at her feet,
Eat a bit, and watch her eat.

All along the river-bank
Mango trees stood rank on rank,
And his monkey friend would throw
To him as he swam below.
Mangoes gold and ripe and sweet
As a special summer treat.
‘Crocodile, your wife, I know
Hungers after mangoes so
That she’d pine and weep and swoon,
Mango-less in burning June.’
Then Kuroop the crocodile,
Gazing upwards with a smile,
Thus addressed his monkey friend:
‘Dearest monkey, in the end,
Not the fruit, but your sweet love,
Showered on us from above,
Constant through the changing years,
Slakes her griefs and dries her tears.’
(This was only partly true.
She liked love, and mangoes too.)

One day, Mrs Crocodile,
Gorged on mangoes, with a smile
–Sad, yet tender–turned and said:
‘Scalykins, since we’ve been wed,
You’ve fulfilled my every wish
–Dolphins, turtles, mangoes, fish–
But I now desire to eat,
As an anniversary treat,
Something sweeter still than fruit,
Sugar-cane or sugar-root:
I must eat that monkey’s heart.’
‘What?’ ‘Well, darling, for a start,
He has been so kind to me;
Think how sweet his heart must be.
Then, the mango pulp he’s eaten
Year on year must serve to sweeten
Further yet each pore and part,
Concentrating in his heart.’

‘Darling, he’s my friend.’ ‘I know;
And he trusts you. Therefore go–
Go at once and fetch him here.
Oh, my breath grows faint, I fear…’
‘Let me fan you–it’s the heat–‘
‘No–I long for something sweet.
Every fruit tastes bitter now.
I must eat his heart somehow.
Get him here, my love, or I,
Filled with bitterness, will die.’

When the monkey saw Kuroop
He let out a joyful whoop,
Jumped from branch to branch with pleasure,
Flinging down the golden treasure:
‘Eat, my friend, and take your wife
Nectar from the tree of life–
Mangoes ripe and mangoes rare,
Mangoes, mangoes everywhere.’
Then Kuroop the crocodile
Gazed up with a gentle smile:
‘Monkey, you are far too kind,
But today, if you don’t mind,
Dine with both of us, and meet
Her whose life you’ve made so sweet.
When you meet her you will see
Why she means so much to me.
When she takes you by the paw
Something at your heart will gnaw.
When you gaze into her eyes
You will enter Paradise.
Let us show our gratitude:
Share our friendship and our food.’

‘Dear Kuroop, dear crocodile,
You can swim from isle to isle.
I can leap from limb to limb,
But, my friend, I cannot swim.
And your island’s far away.
If I get a boat some day…’
‘Nonsense; jump upon my back.
You’re no heavier than my sack
Filled with mangoes to the crown.’
So the monkey clambered down,
Bearing mangoes, and delighted
With such warmth to be invited.

They were just halfway across
When the crocodile said: ‘Toss
All those mangoes in the water.’
‘But these fruit are all I’ve brought her.’
You yourself are gift enough,’
Said Kuroop in accents gruff.
‘Ah, my friend, that’s very gracious.’
‘Well, my wife’s not so voracious–
And I’m certain that today
She won’t eat fruit. By the way,
Tell me what your breast contains.
Mango nectar fills your veins.
Does it also fill your heart?’
Said the monkey with a start:
‘What a very curious question.’
‘Well, she might get indigestion
If it’s too rich, I suspect.’
What? Your heart.’ ‘My heart?’ ‘Correct.’

‘Now,’ Kuroop said with a frown,
‘Which would you prefer–to drown
In the Ganga or to be
Gutted by my wife and me?
I will let you choose your end.
After all, you are my friend.’
Then he slowly started sinking.
‘Wait–‘ the monkey said, ‘I’m thinking.
Death by drowning, death by slaughter
–Death by land or death by water–
I’d face either with a smile
For your sake, O crocodile!
But your wife’s felicity–
That’s what means the most to me.
Noble lady! How she’ll freeze,
Dumb with sorrow, when she sees,
Having prised my ribs apart,
That my breast contains no heart.
If you had not rushed me so,
I’d have found the time to go
To the hollow where I keep
Heart and liver when I sleep,
Half my brain, a fingernail,
Cufflinks, chutney, and spare tail.
I had scarcely woken up
When you asked me here to sup.
Why did you not speak before?
I’d have fetched them from the shore.’

Now Kuroop the crocodile
Lost, then quickly found, his smile.
‘How my sweetheart will upbraid me!
Monkey, monkey–you must aid me.’
‘Well…’–the monkey placed his paw
Thoughtfully upon his jaw–
‘Well, although the day is hot
And I’d really rather not–
We could go back, fetch my heart,
Check its sweetness, and depart.’

So the crocodile once more
Swam the monkey back to shore,
And, with tears of thankfulness
Mingled with concern and stress,
Worried what his wife would say
With regard to his delay,
Begged his friend: ‘Come back at once.’
‘I’m not such a double-dunce,’
Yelled the monkey from on high;
‘Tell your scaly wife to try
Eating her own wicked heart
–If she has one–for a start.
Mine’s been beating in my breast
Night and day without a rest.
Tell her that–and as for you,
Here’s my parting gift–‘ He threw
Mangoes squishy, rotten, dead–
Down upon the reptile’s head,
Who, with a regretful smile,
Sat and eyed him for a while.

This is an excerpt from Vikram Seth's Beastly Tales from Here and There published by Speaking Tiger Books. Republished here with permission from the publisher.
One of the most celebrated writers of our time, Vikram Seth is the author of three novels—including A Suitable Boy and The Golden Gate (a novel in verse) that are widely regarded as modern classics—and two works of non-fiction. He has also written seven books of poetry, which include an opera libretto and a book of other libretti. He divides his time between the UK and India.