First published in the Odia in 1948, and translated for the first time here into English by Bikram Das, Gopinath Mohanty’s Harijan is one of the most original and radical Indian novels of the twentieth century. It brings to vivid life the story of a group of Mehentars living in a slum. Cleaning latrines with their bare hands is the only work that they can hope to find as their caste excludes them from every other occupation. The leader of this group is the middle-aged and foul-mouthed Jema who starts her day by gulping down a potful of liquor and smoking pinkas in order to deal with the stench of the excreta. One day, Jema comes down with a fever and is unable to go to work. Fourteen-year-old Puni offers to take her mother’s place. The next morning Puni wakes up early, bathes, puts on a clean sari, and dabs some cheap perfume on her skin. Stepping out of the hut excitedly, she picks up basket and broom. When she arrives at the first latrine, the stink hits her with the force of a hammer blow. She drops her basket and broom, turns around, and is trying to run away, when her friends stop her. ‘This is what you will have to do every day for the rest of your life! It is your fate!’

The following is an extract from chapter 12 of the book. 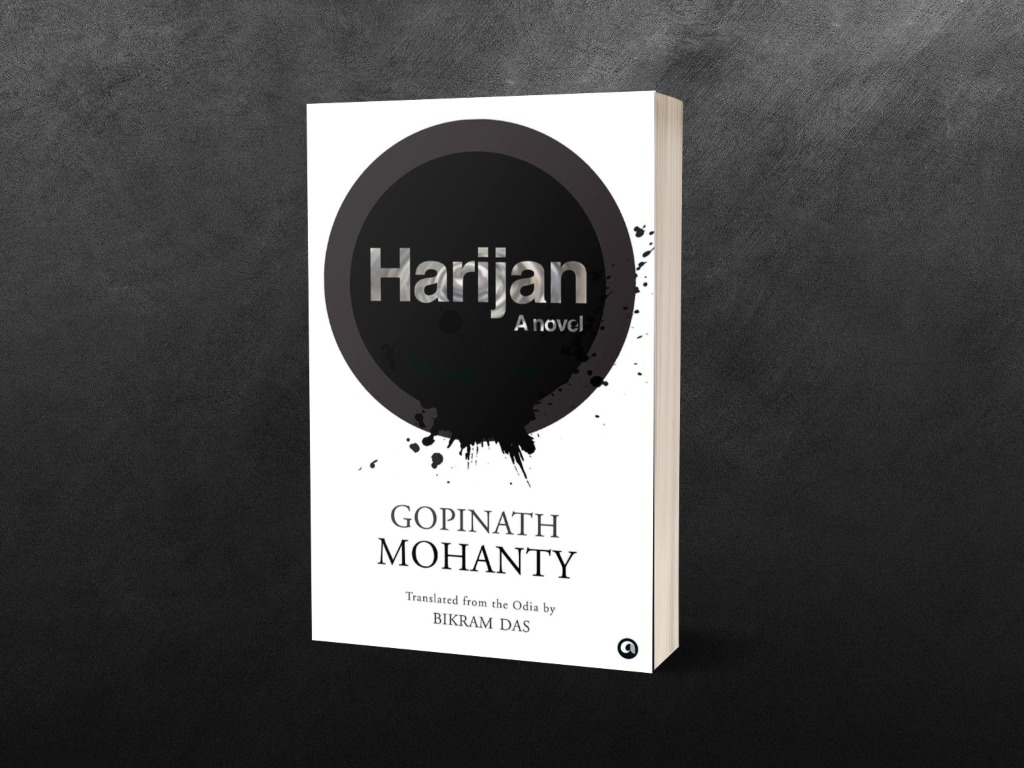 There was a sudden blast of noise and a crowd of young men and women came out into the street holding baskets and brooms. Was every second person in the city a mehentar? With the sun climbing higher, it was only work, work, work.

Puni was picking up her first lesson. This was her basket and this her broom. She had seen her mother carrying the tools of her trade but never tried doing it herself. She was looking forward to the new experience.

Ranga called out to her: ‘Come, Puni, we will have to work fast—there are many houses to be cleaned!’

Almost every house had a ‘khata paikhana’ or ‘dry latrine’ at the back, which had to be cleaned manually by a mehentrani once in three or four days. It was a tiny, windowless, airless shed with a floor that was raised at least three feet off the ground and had a hole in the centre over which the user squatted. The waste dropped into a bucket below and when it was full, it was dragged out by the mehentrani, cleaned, and put back in place. With her bare hands she scooped the excreta out of the bucket into her basket and carried it on her head to the cart which would transport it to the dumping-ground far away from the city. The mehentrani entered the pit through a trap-door at the rear which had to be lifted by another mehentrani. Tabha was waiting for her now.

Puni crouched low, shivering, and looked into the darkness. The stink rose in waves to hit her. Her senses were reeling. The everyday life of a mehentrani lay spreadeagled before her, waiting. This would be her life now! Lost to the world, she surrendered herself to this hell. Where was she? What was happening to her? The same darkness, the same foul odour.

What next? ‘What are you staring at, stupid? Haven’t you seen shit before? Why did you come here if you are so dainty?’ Ranga said angrily.

Tabha gave her a shove. ‘Hurry up!’ she shouted.

With her senses suffocating, Puni dragged the overflowing bucket towards the trap-door. Ranga and Tabha caught hold of the handle, lifted it and poured out the contents into Puni’s basket.

‘Pick it up and take it to the cart!’ Ranga said grufly. ‘Why are you making such a fuss! You can throw up later! Have you never seen a child creating a mess? Think of it that way! Everything is dificult at first.’

The vomit was rising inside her. She was keeping it down by force! She picked up the basket of shit, turning it around towards her back and walked out with her head bowed. What is happening to me, she was thinking. Why had she come rushing in such impatience? Was there no other work for her in the whole wide world? Who is she, what is she carrying and where is she going? The horror had entered deep into her. She felt hatred for herself. This is how she would have to live—carrying basketfuls of shit, with her head lowered to the ground, so she could feed herself and remain alive. This was God’s gift, given to her on the day she was born!

‘Careful, careful!’ Tabha shouted out suddenly. ‘What are you doing, Puni? Put it down!’ In her haste Puni had caused the basket to tilt precariously to one side and a mass of excrement spilled over to the ground. ‘Oh, you clumsy girl!’ Tabha said, ‘Didn’t you spread a layer of sand at the bottom of the basket, as I told you to do?’

Puni looked at the mess which her ineptitude had caused and exclaimed in disgust ‘Ish!’

‘What ish!’ Ranga said. ‘You have shit all over your back! All right, lift the basket to your head!’

A group of pedestrians walked by, looked, covered their noses quickly with their dhotis or saris and exclaimed ‘Ram! Ram!’ in horror. ‘Clean it up—quick, quick!’ they told the girls as they walked past.

Puni bent down, half-squatting, and cleaned up the mess she had made, wiping her fingers on the ground, looking at Ranga and Tabhu with sad, appealing eyes. No trust, no sympathy. They were laughing silently at her plight.

‘Ki lo, why are you behaving like that? How will you do this work?’

Ranga and Tabha found this hilarious. ‘Just listen to her! The smell, she says! Something new!’ Tabha offered her a pinka. ‘Light it!’ she said. ‘It will drive the smell away.’

‘You’ve never worked before,’ Ranga said, ‘how would you know the greatness of a pinka? You will smoke pinkas, drink liquor, work, earn money! Is there another way?’

‘None!’ Tabha said. ‘This is our family profession! The only one that does not make you untouchable! Go anywhere else and they will all shout “She touched me! She touched me!” Go on, Puni, puff harder at the pinka!’

Tabha and Ranga were inhaling the smoke from their pinkas with great relish, making sucking noises. There was a layer of bluish, acrid tobacco smell covering the damp, penetrating stink of stale shit. Puni raised no objections but brought the pinka to her lips. From this day, everything strange and unnatural would become a part of her life.

‘Come on Puni!’ Tabha said to her. ‘You are too slow! They will all be waiting to shout at you and abuse you—you’ll see for yourself!’

‘There’s the mistiri on his bicycle now, coming to check on our work!’ Ranga said.

They stood there relaxing. Then Ranga left the other two. ‘We have an untrained bullock on our hands,’ she said. ‘Puni, do your work well, do you understand, or you’ll get a scolding!’

Tabha seemed to be amused by something. ‘Do you know where she went?’ she asked. ‘No, where?’ Puni said.

‘Oh, never mind—you’ll get to know everything. You’re just a child!’

Puni had no desire to know. Let Tabha go wherever she wants! The shit-cart was being washed. Sania sat shaking his legs,

‘Going home, Puni?’ he asked. ‘Good for you! You’ll start earning now! Isn’t work fun? Why were you sitting at home all this time?’

He took Puni’s basket from her hands and emptied it into his cart. ‘You can go home now!’ he told her and pushed off. What an ass; didn’t he have one loving word for her? The feeling of helplessness was trying to push itself out into the open through her eyes. She could see him at a distance. Burning in her own fire, she turned her attention to her work.

Again and again, not once. She would have to drown in the stinking darkness of that hell and struggle to raise herself again. Her basket would be refilled and emptied repeatedly. Face, hands, mouth, her entire body—everything would get smothered in filth. That’s how the world was. Entirely. The faith and hope that had taken fourteen years to grow within her were dead. The feeling of hopelessness was growing.

The holy books said the body was a temple. But the temple that Puni was had no deity. She vomited twice. She felt weak.

Standing next to a public lavatory, leaning against a pillar, she made a pitiable picture. Around her she could see visions of hell in many different shades. Mehentranis were collecting dark, foul-smelling liquid from drains and latrines and pouring it out into carts. She was losing the strength or the will to cope. The world was revolving around her like a whirlpool.

Someone standing behind her shouted out ‘Hey, toki! How long are you going to make me wait?’ The mehentar is drunk, red-eyed. People walking past turn their faces away in disgust. Marking each step they take with a thick blob of spit, looking laundered and white-washed—moving latrines!

‘Can’t you hear what I am saying, toki? Wait, I’ll teach you a lesson!’

‘Don’t make such a fuss!’ Tabha says to her. ‘Remember what we are—mehentranis’ daughters! We have to survive too!’

The backdoor of Avinash Babu’s enormous house is waiting to invite her in.

This is excerpt from Harijan: A Novel written by Gopinath Mohanty and translated by Bikram Das and published by Aleph Book Company. Republished here with permission from the publisher.
Gopinath Mohanty (1914–91) was an eminent Odia novelist and short story writer. His novels Paraja and Danapani are modern classics, and have been widely translated. He was the winner of the Sahitya Akademi Award in 1955 for his novel, Amrutara Santaan. He won the Jnanpith Award in 1974 and Padma Bhushan in 1981.