Rumours of Spring: A Girlhood in Kashmir is the unforgettable account of Farah Bashir’s adolescence spent in Srinagar in the 1990s. As Indian troops and militants battle across the cityscape and violence becomes the new normal, a young schoolgirl finds that ordinary tasks – studying for exams, walking to the bus stop, combing her hair, falling asleep – are riddled with anxiety and fear.

With haunting simplicity, Farah Bashir captures moments of vitality and resilience from her girlhood amidst the increasing trauma and turmoil of passing years – secretly dancing to pop songs on banned radio stations; writing her first love letter; going to the cinema for the first time – with haunting simplicity.

In this conversation with independent researcher, writer and women’s rights activist, Sahba Husain, Bashir talks about her memoir and more. 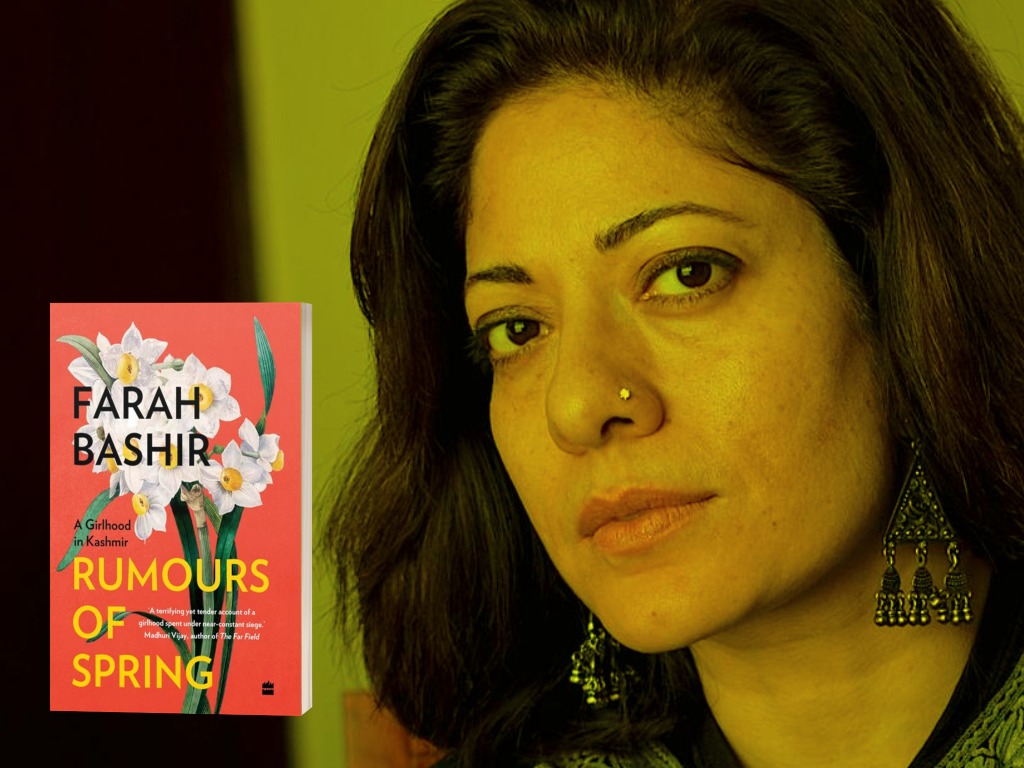 Sahba Husain (SH): You were born and raised in Kashmir and Rumours of Spring is your debut book, a memoir written with searing simplicity, grace and courage. While reading it, one gets a palpable sense of how everyday life gets so deeply affected and threatened with violence due to militarisation as well as militancy in Kashmir. When and how did the idea of this book begin to take shape?

Farah Bashir (FB): I kept a journal at the age of fourteen. In the early 1990s, as our schools opened sporadically, our diaries stayed unused. Each page was divided into two halves for two days. I started filling page after page. Initially, when I began, life was changing on an hourly basis, and it wasn’t possible to capture all of it. So, I started recording little details –let’s say about — a carrom game that I’d lost with my sister or cousins or the funeral of my cousin where I couldn’t cry. I kept a ledger of time and memory, essentially.

A few years later, I even started writing amateur poetry. Once I had this strong urge to write an elegy. Much as I tried to resist it, I wrote it and three days later my grandmother, Bobeh, died. In the same week, I consigned all the 88 poems that I had written to flames. But the habit of documenting details remained. Whether it was observing body language, accents or peculiar personality traits, my brain had been trained to retain memory in its barest detail.

Finally, between 2005 and 2008, when I used to work with the Global Pictures Desk, Reuters, in Singapore, from having edited news from Iraq, Palestine; many memories returned. I used that period to read extensively on Kashmir for the first time to make sense of what we had lived through after the armed insurgency erupted against New Delhi. While working, I remember sending a picture of a rather brooding girl, sitting atop a shikara, to the Times square (as Reuters used to have direct access to it back then). It invited a comment from one of the editors that it looked too grim to be sent where it’d be flashed a few thousand times its original size. I didn’t have an answer for him at that moment. In hindsight, it felt like that was the moment in which I wanted, in my own way, to draw the world’s attention to what Kashmiris as a people had been and were enduring. 2008, the year I left Reuters is when I began to write. I discarded two manuscripts, but the resolve kept getting stronger especially in 2010 and 2016. The killings of teenage boys made me investigate the past of an adolescent girl who had survived a war like thousands of other girls, as humanity eroded steadily.

SH: The book is an account of your adolescent years spent in Srinagar during the 1990s. Do you have any memories, or what kind of memories do you have of the years spent in the city prior to militancy?

FB: It was intense in every way. I grew up in the old quarters of the city, in downtown Srinagar. Growing up there meant listening to folklore, following unique rituals and traditions, some of which had travelled hundreds of miles through the silk route. There was a deep sense of history and a contemporary understanding of politics. The area was also a hub of political activities. Whether it was rigging of the elections in the late 1980s or digging the pitch in mid 1980s, or slogans and demonstrations that were carried out after ‘Lion of the Desert’ was played at a local cinema; the political air was always charged.

Instability and uncertainty were part of our lives much before the 1990s. After 1989, it became more restive and growing up there meant being full of high-strung emotions for children and adults alike. On the streets, inside homes. It was the decade in which life and events changed on an hourly basis. From facing not just the mortality of beings but growing up in those years was also confronting the mortality of one’s culture and land.

For a young girl, each event was an out of body experience of being overwhelmed, fearful, wanting to escape it all and hide somewhere safe. But one lacked the articulacy needed to frame questions to understand the metamorphic changes. It took many years to process those changes before one could articulate them.

SH: Your description/narration of how you inflict excruciating pain upon yourself by tugging and tearing out bits of your own hair struck me as I had myself met doctors at the psychiatric hospital in Srinagar, counselling adolescent boys and girls for the same. Your thoughts on whether trauma and traumatic experiences that are so commonplace in Kashmir are recognised/treated adequately by the family, community and society? What, according to you, is needed for traumatised people to heal?

FB: Women’s lives are a part of social history that cannot be ignored. Both the ordinary and the mundane exist in people’s lives despite conflict or wars. In some cases, women also develop an adverse relationship with their bodies. Some mutilate, some disfigure, some are apathetic. To get to the depths of a society, lives of ordinary women need to be examined in entirety to grasp what militarisation did and does to a people. In territorial conflicts, women are dual recipients of violence. Their bodies can be used to shame and subjugate people. These losses are unaccounted for with colossal consequences.

SH: When did you leave Kashmir and what has it meant for you and your family?

FB: One never leaves home. I went to study just like hundreds of other young boys and girls. My parents prioritised our studies over everything. My mother often used to say, “parneh khaetere agrai Cheen peyyi gaczun, gaczun gaczi.” (If one needs to travel to China to study, one must. The closest to that was Singapore, I guess, where she sent me.)

SH: Have you visited Kashmir since the abrogation of Article 370 on 5th August 2019? Please share your thoughts on the abrogation and its implications for the people and the future of JK?

FB: Yes, my parents who are in their mid and late 70s live there as do the rest of my family and relatives. Article 370, as we all know, was hollowed out in the last seven decades. But for the valley to be under the direct rule of the centre for such a long period, to be stripped of markers of their political identity such as their constitution or the flag, is about disenfranchising and dispossessing people without their representation whatsoever.

SH: Lastly, could you please share with us your experience of writing this book.

FB: As a teenage girl, growing up in a conflict-stricken territory happened to be a dual struggle: to make sense of the militarisation of domestic spaces and to learn new social etiquette— informed by war— to navigate life. It was crucial to record what a teenage girl went through in one of the most important events in Kashmir’s contemporary history in the last 150 years (the previous two being Amritsar Treaty and the 1931 uprising). A girlhood and adolescence, which is both familiar and universal, and yet turned into a searing, heightened experience by the anxiety and fear of war.