Freedom of press compromised in Kashmir

Shedding light on the pathetic state of press freedoms in Kashmir at present, RAJA MUZAFFAR BHAT goes over the recent history of curbs on journalists in Kashmir, and expresses concern over the future of the practice of journalism in Kashmir. 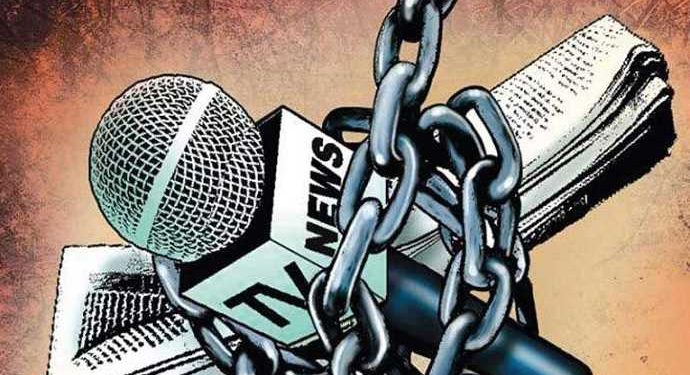 The Press wields immense power in a democratic society. It forms opinions, shapes movements and controls policies through well-informed criticism. The English writer Charles Dickens, in one of his books, called the press a “mighty engine”. The influence of the press is so great that it is also called the ‘Fourth Estate’. The French military leader Napoleon used to say — “Your hostile newspapers are more to be feared than a thousand bayonets.”

An independent, well-informed press is a powerful check on arbitrary governments and irresponsible administrators. Upright journalists are agents of the public, who bring to the notice of the people acts of injustice or oppression or mal-administration that would otherwise have remained hidden away from public knowledge. Independent journalism exercises a constant vigilance on those at the helm.

A free press is the symbol of free people.

My columns, articles and reportage over the last 15 years (including on The Leaflet) have been focussed on themes such as good governance, the right to information, climate change, forest rights, and the non-implementation of centrally sponsored schemes like the Pradhan Mantri (PM) Awas Yojana, the PM Ujjwala Yojana, the PM Gram Sadak Yojana, among other things. I hardly write any commentary on the political developments in Jammu and Kashmir, yet successive governments in the region have expressed annoyance with my positive criticism.

I write this piece under the apprehension that authorities in the Union Territory of Jammu and Kashmir will get provoked by what I am writing, and might even seek reprisal like how I was detained for three months immediately after Article 370 of the Indian Constitution was effectively nullified in 2019.

The reader can very well imagine about how likely, in these circumstances, they are to read independent political commentary from journalists or columnists based in Kashmir.

Freedom of press guaranteed by Constitution, elusive in practice

According to the Universal Declaration of Human Rights, everyone has the right to freedom of opinion and expression. This includes the freedom to seek, receive and impart information and ideas through any media and regardless of frontiers.

The Indian Constitution does not mention the words ‘press’ or ‘media’. However, it is a settled position in Indian jurisprudence that the freedom of the press is inherent in the fundamental right to freedom of speech and expression prescribed in Article 19(1)(a) of the Constitution. Press freedoms can only be restricted in a reasonable manner as per the grounds provided in Article 19(2), which is, for reasons of “sovereignty and integrity of India, the security of the State, friendly relations with foreign States, public order, preserving decency, preserving morality, in relation to contempt, court, defamation, or incitement to an offense”.

For the first half-century of India’s independence, news reporting was under the sole domain of the public broadcasters, which was a major constraint on the freedom of press. Former Prime Minister Indira Gandhi, during the period of national emergency in 1975, had said that All India Radio was a government organ, and would always remain one. Of course, press freedom came under great scrutiny across the country during the emergency period.

With the commencement of economic liberalization in the 1990s, private control of media burgeoned, leading to increasing independence and greater scrutiny of government. But during the last seven years, many media houses in India and even some reputed journalists have come under government scrutiny under the garb of promoting nationalism and preserving the country’s sovereignty and security.

Laws such as the Unlawful Activities (Prevention) Act (UAPA), the National Security Act, Jammu and Kashmir Public Safety Act, and the sedition provision of the Indian Penal Code have come to be widely used of late to limit press freedom under the present National Democratic Alliance government’s rule. However, these laws were arbitrarily used by the authorities to muzzle the press during the United Progressive Alliance government’s rule too.

Presently, it is difficult for the press in India to be free. Most newspapers and news channels are controlled by a corporate house or some financial magnate, and function as either a government mouthpiece or are affiliated with some political party. Only a handful of media outlets are truly independent today.

In such circumstances, the public importance is compromised.

Whenever I write articles and opinion pieces, especially post the abrogation of Article 370, I cannot help think of how the government will react to it. Journalists, political commentators, columnists and even activists have been living under constant fear in Jammu and Kashmir.

Earlier this week, raids were conducted by the Jammu and Kashmir police on the houses of four journalists in Srinagar, who were also detained and questioned for hours. The police said that they conducted raids as part of the investigation in FIR No. 82/ 2020 at the Kothibagh police station, and had obtained a search warrant from a special designated court under National Investigation Agency Act.

Local journalist organisations have condemned these raids. In the past, too, local journalists have protested against the frequent harassment of fellow scribes or media gags by the government, but these seem to have no impact on the authorities.

Presently, a journalist associated with the Kashmir Narrator news magazine Aasif Sultan has been under detention for more than three years. He was arrested on August 27, 2018 and booked under the stringent UAPA in a case pertaining to an encounter that took place at the Batamaloo locality of Srinagar on August 12, 2018.

He is accused of sheltering the militants who killed a policeman and injured several paramilitary personnel. Sultan’s family and lawyers deny this charge.

It is speculated that Sultan was detained after he wrote a detailed piece in the Kashmir Narrator about how Burhan Wani, the Hizbul Mujahideen militant commander, had inspired hundreds of Kashmiri youth into militancy.

In 2019, Sultan received the John Aubuchon Press Freedom Award from the American National Press Club. His case was featured among the ten ‘most urgent’ cases of threats to press freedom around the world for May 2019 in a list released periodically by the One Free Press Coalition, a collective of leading press organizations worldwide.

Earlier this year, the advocacy organization Clooney Foundation for Justice announced that it would monitor the trial of Sultan.

History of lack of press freedom in Kashmir

The political conflict and confusion of the last several decades in Jammu and Kashmir has militated against the independence of the press here. Interference by various state and non-state actors  has hampered the growth of the fourth estate as well as other socio-political institutions in Jammu and Kashmir.

Before 1947, the press in Kashmir was under scrutiny of the Dogra rulers. Even under “democratic” governments from 1947 to 1989, the press faced a lot of curbs. In fact, under Bakshi Ghulam Mohammad’s tenure as Prime Minister of Jammu and Kashmir from 1953 to 1964, the press could not engage in any positive criticism, and even listening to Radio Pakistan was a crime those days. I have been told by many senior citizens that any person who would listen to a Pakistani song or news broadcast on their radio-set would be detained along with the radio-set.

Since the 1990s, the local press has been sandwiched between the threats of two guns: One of militant groups, and the other of the police and security establishment.

53 journalists have been confirmed as having been killed for their work in India between 1992 and 2021, according to the American non-profit organization Committee to Protect Journalists (CPJ). Out of these, more than a dozen were killed in Kashmir.

The government has provided security cover to many journalists in Kashmir, in spite of which some journalists have been murdered in broad daylight in Srinagar.

The murder of senior journalist and then Rising Kashmir editor Shujaat Bukhari in a broad day light in June 2018, sent shock waves through the fraternity of journalists in Kashmir. Security agencies claim that the main accused in the murder, Naveed Jhat, a Pakistani militant, was killed in an encounter in 2019.

Currently, most Srinagar-based newspapers are stuck between a rock and a hard place.

If they write the truth of what the local citizens demand, the Directorate of Advertising and Visual Publicity and other government advertisements would be cut off by the Union Ministry of Information and Broadcasting and the local Department of Information and Public Relations (DIPR), leading to the loss of advertising revenue.

If they write in favour of the government, they face the wrath of militant groups. This was much more severe in the past, but continues even now.

There have been several militant attacks on local newspaper offices and journalists in the past, and some have even been killed.

On the other hand, over the last two years, several reputed newspapers published from Srinagar have been deprived of government advertisements. This has been one of the factors that has resulted in a severe financial crunch at these institutions, as a consequence of which many professional and upright journalists are jobless in Kashmir, with many more shifting to other professions.

At the same time, the government’s control and censorship of the press in Kashmir has only grown stronger, and currently borders on creeping control.

Taking advantage of these circumstances, many unprofessional people have begun working as journalists, and resorting to unethical activities such as blackmailing contractors and low-level government officers.

Freedom of the press can be guaranteed only among a free people in a true democracy.

If Kashmiri journalists can’t even write critically about public utilities like bijli, sadak or pani (the state of water supply, roads and water supply, respectively), what is the point of the fourth estate?

Unfortunately, newspapers published from Srinagar or even from Jammu today don’t carry any investigative reports anymore; they have become government mouthpieces, carrying press releases of the DIPR. The editorials in the majority of newspapers are not worth reading as columnists and newspaper editors don’t want to annoy the government.

This situation is nothing short of alarming, and it rings the death knell of journalism in Kashmir.

First published in The Leaflet.
Raja Muzaffar Bhat is a Srinagar-based columnist and activist. He is the founder and chairman of the Jammu and Kashmir RTI Movement and an Acumen India Fellow.
Disclaimer: The views expressed in this article are the writer's own, and do not necessarily represent the views of the Indian Writers' Forum.