Wide terms of the IT Rules 2021 have a chilling effect on freedom of speech: Bom HC 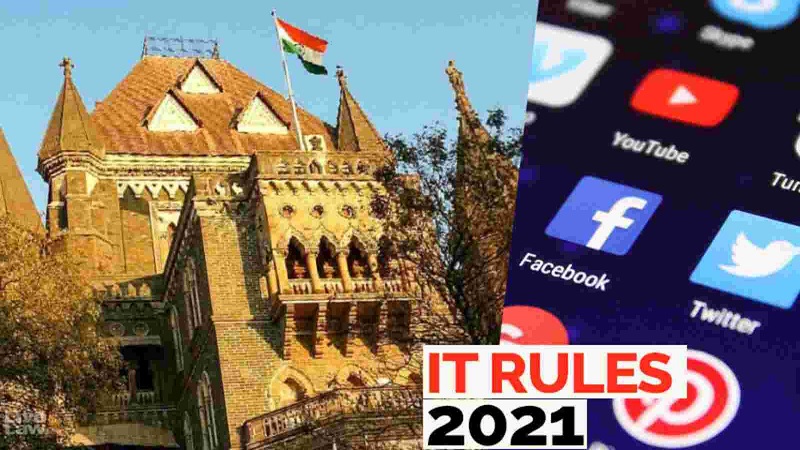 The Bombay High Court has granted interim stay on the operation of Rule 9 of the Information Technology Intermediary Guidelines and Digital Media Ethics Code) Rules, 2021 (2021 Rules) for infringing Freedom of Speech and Expression as conferred by Article 19(1)(a) of the Constitution. The bench headed by Chief Justice Dipankar Datta and also comprising Justice GS Kulkarni also opined that prima facie Rule 9 is ultra vires the provisions of the Information Technology Act, 2000 (IT Act) being beyond the delegated power.

The writ petition was filed by The Leaflet against the 2021 Rules, on the ground that they are ultra vires the IT Act. The PIL was filed by journalist Nikhil Wagle. The counsels for both petitioners argued that the 2021 Rules are ex facie draconian, arbitrary and patently ultra vires the provisions of the IT Act and the provisions of Articles 14, 19(1)(a) and 19(1)(g) of the Constitution.

The Leaflet, as a platform publishing articles, opinion pieces as well as news raised concerns over Rules 9, 14 and 16. Rule 9 requires a publisher to have self-regulation as well as an oversight mechanism by the central government and also states that any publisher 2021 Rules, a publisher referred to in rule 8 who contravenes any law for the time being in force, shall also be liable for consequential action as provided in such law, which has so been contravened. Rule 14 provides for inter-departmental committee to be constituted by the Union government, who shall be administered by the Ministry of Information and Broadcasting, which will hear complaints regarding violation of code of ethics by the entities and after a hearing may direct the entity to issue an apology, edit the published article, modify the same or delete it completely. Rule 16 provides for “blocking of information in case of emergency” and allows an authorised officer to recommend removal of content if it fulfils grounds under section 69A of the IT Act. Under section 69A of the IT Act, if the government is satisfied that that it is necessary or expedient so to do, in the interest of sovereignty and integrity of India, defence of India, security of the State, friendly relations with foreign States or public order or for preventing incitement to the commission of any cognisable offence relating to above, it may direct any agency of the Government or intermediary to block for access by the public any information.

Senior Advocate Darius Khambata for The Leaflet argued that the provisions of Rule 9 , 14 and 16 are patently ultra vires Article 19(1)(a) of the Constitution in as much as such provisions travel beyond the ambit of the restrictions as imposed under Article 19(2). He also submitted that the Rules have a terrible chilling effect in their applicability to the internet as they bring about a manifestly unreasonable and an arbitrary regime amounting to an affront to the constitutional guarantee of the right of citizens to exercise freedom of speech and expression.

He argued, “The 2021 Rules have been framed as if it is a substantive legislation, completely transgressing the rule making power available under Section 89of the IT Act. It is submitted that not a single provision under the IT Act and much less Section 69-A and Section 87 would provide having such restrictions and control as brought about by the impugned rules.” He submitted that “a subordinate legislation is intended to sub-serve the provisions of the principal Act and cannot result in creating fresh rights, obligations and liabilities not traceable in the enactment conferring power to frame rules.”

Abhay Nevagi appearing for Wagle supported these submissions and said that the 2021 Rules amount to a virtual censorship on the information that is openly available not only in the print/electronic media, but also on the social media. He submitted that no other country has such a mechanism to control the information in such a manner and that the 2021 Rules impose mass censorship.

Anil Singh appearing for the Union Government referred to the short affidavit filed by Singh, Deputy Secretary, Ministry of Information & Broadcasting which states that there is a presumption of constitutionality of the rules considering the settled principles of law and that there is no need to stay the 2021 Rules since the inter-departmental committee as contemplated by Rule 14 has not been constituted. Singh submitted that out of 1800 digital media publishers, 97% publishers of news and current affairs houses, have not challenged the 2021 Rules and thus the provisions are accepted and implemented.

The court refused to interfere with Rule 14 as neither the inter-departmental committee has been constituted, nor has the authorised officer been appointed and gave the petitioners the liberty to urge the court for relief when the committee is constituted. The court also read Rule 16 to be similar to Rule 9 of the 2009 Rules to which no objection has been raised and hence the court found that no case was made to stay Rule 16. “In any event, blocking of information in case of emergency as provided by Rule16 is on the grounds traceable in sub section (1) of Section 69A of the IT Act which is a provision falling in line with the restrictions as imposed by Article 19(2) of the Constitution…,” the court observed.

The court also refused to interfere with Rule 7 of 2001 Rules in the absence of clear satisfaction that the petitioner, Nikhil Wagle being a journalist, is an ‘intermediary’ within the meaning of Section 2(w) of the IT Act.

Coming to Rule 9 of the 2021 Rules, the court observed that it suffers from two illegalities firstly, it imposes an obligation on the publishers of news and current affairs content and publishers of online curated content to observe the Code of Ethics under a completely different statutory regime alien to the IT Act, namely, by applying norms of Journalistic Conduct of the Press Council of India under the PC Act and Programme Code under Section 5 of the CTVN Act.

“It cannot be overlooked that the two provisions referred to in the “Code of Ethics”, namely, Norms of Journalistic Conduct of the Press Council of India under the PC Act and the Programme Code under Section 5 of the CTVN Act are under different statutory regimes occupying the field for the purposes of those two enactments.  It is prima facie difficult to comprehend as to how such fields which stand occupied by independent legislations can be brought within the purview of the impugned rules and substantive action can be taken for their violation under the impugned rules,” the court said.

The court also pointed out that even otherwise the IT Act does not seek to censor content on the internet, except for provisions under section 69A of the Act.

The court also referred to the norms of Journalistic Conduct of the Press Council of India and observed that the sanction behind these norms, are moral and not statutory in nature. Yet, the 2021 Rules make this obligation mandatory, and exposes violators to more rigorous action than what the PCI Act envisages.

“It is, therefore, incomprehensible as to how by a subordinate legislation, contravention of such code laying down standards of moral behavior, could validly be made a ground for attracting action of the nature specified in Rule 14(5) of the 2021 Rules,” the court said.

About the application of Cable Television Networks Act and Rules, the court observed that it is mainly intended to provide a framework for regulation of programme carried in the cable service and the do’s and don’ts of the Programme Code may be relevant for a programme carried in the cable service but per se cannot bind writers/editor/publishers of content on the internet to express views which may be against good taste or even may not be decent.

“If a writer/editor/publisher has to adhere to or observe the Programme Code in toto, he would necessarily be precluded from criticizing an individual in respect of his public life [see: Rule 6(1)(i)],” the court stated.

“Dissent in democracy is vital. It is, however, the checks and balances that make a democracy work. There can be no two opinions that a healthy democracy is one which has developed on criticism and acceptance of contra views. Opinion based on criticism reinforces its acceptance in a democratic society. For proper administration of the State, it is healthy to invite criticism of all those who are in public service for the nation to have a structured growth but with the 2021 Rules in place, one would have to think twice before criticizing any such personality, even if the writer/editor/publisher may have good reasons to do so without resorting to defamation and without inviting action under any other provision of law.”

The court said that allowing the 2021 Rules in its form and substance form and substance to operate would result in the writer/editor/publisher standing the risk of being punished and sanctioned, should the inter departmental committee be not in favour of criticism of any public figure.

“The indeterminate and wide terms of the Rules bring about a chilling effect qua the right of freedom of speech and expression of writers/editors/publishers because they can be hauled up for anything if such committee so wishes. The 2021 Rules are, thus, manifestly unreasonable and go beyond the IT Act, its aims and provisions.”

“People would be starved of the liberty of thought and feel suffocated to exercise their right of freedom of speech and expression, if they are made to live in present times of content regulation on the internet with the Code of Ethics hanging over their head as the Sword of Damocles. This regime would run clearly contrary to the well recognized Constitutional ethos and principles,” the court observed.

The court held that neither clause (z) nor clause (zg) of sub section (2) of Section 87 under which the 2021 Rules are framed would confer any power on the Central Government to frame a provision in the nature of Rule 9. In the court’s prima facie opinion, Rule 9 appears to be ultra vires the provisions of the IT Act being beyond the delegated power. Furthermore, the court also said that Rule 9 also prima facie appears to be infringing the constitutional guarantee of Freedom of Speech and Expression as conferred by Article 19(1)(a) in subjecting the publishers of news and current affairs content and publishers of online curated content subject to action under the statutory regime of the PC Act and the CTVN Act , which provides for an independent mechanism for any violation of the provisions of such legislation.

The court thus granted an interim stay on the operation of Rule 9 sub-rules (1) and (3). The court has also directed the respondents to file reply affidavits within 3 weeks and kept the petitions for final hearing on September 27.

What does this imply?

The Bombay High Court has stayed the operation of Rule 9 sub-rules (1) and (3) of the 2021 Rules in the interim until a final decision in the case is made. The Rule states:

“9.Observance and adherence to the Code.—

…(3)For ensuring observance and adherence to the Code of Ethics by publishers operating in the territory of India, and for addressing the grievances made in relation to publishers under this Part, there shall be a three-tier structure as under—

(a)Level I -Self-regulation by the publishers;

(b)Level II -Self-regulation by the self-regulating bodies of the publishers;

These two sub-rules stand non-operational for now. This means that the publisher will not have to adhere to all the code of ethics such as the Norms of Journalistic Conduct of the Press Council of India under the PC Act and the Programme Code under Section 5 of the CTVN Act. Further, no self-regulation or central government oversight can be established, allowing the publishers functioning under jurisdiction of Bombay High Court, to freely publish articles without central government interference, subject to further orders of the court.