Two years since abrogation of article 370: Human rights in Jammu and Kashmir

The Forum for Human Rights in Jammu and Kashmir comprises an informal group of concerned citizens who believe that, in the prevailing situation in the former state, an independent initiative is required so that continuing human rights violations do not go unnoticed.

This is the third report issued by the Forum. It has largely been compiled from government sources, media accounts (carried in well-established and reputed newspapers or television), NGO fact-finding reports, interviews, and information garnered through legal petitions. The first report was released in July 2020, followed by a second one in February 2021. This report details several issues from civilian security to freedom of media, speech and information as well as health, employment, land, demography and identity rights. The following is the executive summary of the report. Read full report here. 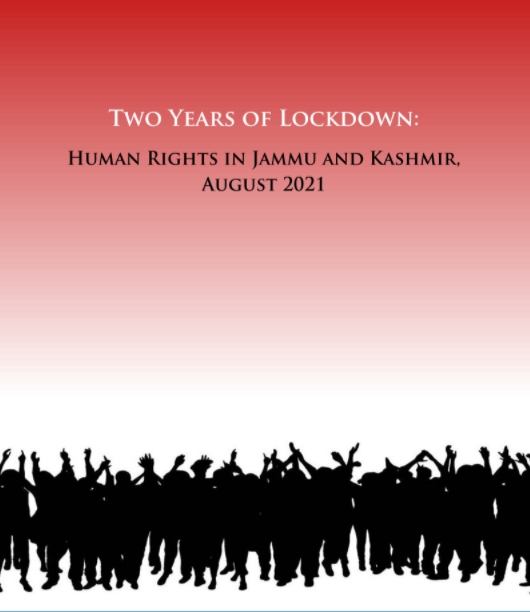 On August 4, 2019, the union government arrested close to 6,000 Kashmiri politicians, dissidents, intellectuals, journalists and youth, snapped tele and internet communications across the state, imposed a blanket curfew, and stationed an additional 40,000 troops at the valley’s towns. The next day, the President of India removed the special status granted to Jammu and Kashmir under Article 370 of the Indian constitution, and on August 9, Indian parliament passed the Jammu and Kashmir Reorganization Act, dividing the state into two union territories, Jammu and Kashmir, and Ladakh.

The combined military, police and communications lockdown continued for the next six months, only to be replaced by a pandemic-related lockdown that lifted only intermittently. In the meantime, the union government took a series of deeply controversial steps that invalidated the state’s residency laws and privileges, removed restrictions on land use and transfer, and denied legal rights to habeas corpus, bail and speedy trial.

While there was some improvement in the second half of 2020, it was only marginal. Most of the political leaders, intellectuals, journalists and youth were released in small batches through the year, though close to 1,000 remain in prison. The courts continued to ignore habeas corpus and freedom of speech protections, curfews were routinely extended, the internet was only partially restored and snapped every time the Indian army conducted counter-insurgency operations, and new media policies further fettered the local media. Jammu and Kashmir’s economy, too, continued its sharp decline, with several industries forced into bankruptcy. Chinese military incursion along the Ladakh border in the spring- summer of 2020, leading to Indian counters in the autumn, further impacted an already fragile security situation. (The Forum’s reports, covering the period August 2019-January 2021, can be accessed here and here).

A small ray of light appeared in February 2021, when the Indian and Pakistani directors- general of military operations (DGMOs) agreed to a cease-fire along the international border between India and Pakistan and the Line of Control (LoC) between the two parts of divided Kashmir. The cease-fire helped restrict infiltration by armed groups and raised hopes that a wider peace process might follow, accompanied by the restoration of political and human rights. Though the cease-fire has held, it is now beginning to fray, as is suggested by the sudden low-cost drone attacks of June.

In June, hopes were raised again when Prime Minister Narendra Modi invited Jammu and Kashmir’s political leaders to a meeting. The meeting had an open agenda and it seemed as if the Prime Minister wanted to consult regional representatives on how to restore a political process. It has been three years since the last elected administration, led by Chief Minister Mehbooba Mufti, was toppled. On the ground, most residents believe that an elected administration will be far more receptive to civil and human rights than the governor and lieutenant-governor’s rule that they have had to subsist under.

The Prime Minister’s offer, however, fell far short of expectations. The Reorganization Act, he said, would continue to be implemented, and elections would be held for a Union Territory assembly. Statehood would be restored only at an unspecified “appropriate time”, as Home Minister Amit Shah said in parliament in February 2021 while piloting a bill to dissolve a key function of statehood, the Jammu and Kashmir administrative service¹.

These pre-conditions put regional parties in an awkward position, since the largest and most popular of them are in the Supreme Court of India, challenging both the hollowing out of Article 370 and the Reorganization Act. If they participate in assembly elections under these conditions, their challenges in court may be rendered infructuous. If they do not, there is a high risk that human rights abuses will continue unchecked.

Today, on the second anniversary of the military lockdown and loss of statehood combined with division of the state, the Forum is constrained to say that most of the violations described in the first two reports remain valid. Arbitrary detentions continue, public assembly is still prohibited under Section 144 of the Code of Criminal Procedure 1973 (CrPC), and close to 1,000 people are still in prison, including minors and elected legislators. Indeed, the Jammu and Kashmir administration appears to have added a new vigilantism against government employees, whose social media content is now subject to police scrutiny for ‘anti-national activities’, potentially leading to dismissal. Eighteen government employees have already been dismissed.

The former state’s industries still reel under the dual impact of the lockdown and the Covid- 19 pandemic. While the tourist industry showed signs of a recovery earlier in 2021, the second Covid-19 wave again halted recovery. Unemployment in Jammu and Kashmir has fallen somewhat but is still 11.56 percent; there is a media gag on healthcare workers; and the local and regional media have not regained what little independence they had.

Statutory bodies to which citizens could go to seek redress – for human rights, women and child rights, anti-corruption and the right to information – have not been reinstated, even though union territories too are entitled to independent statutory bodies for oversight, as pointed out in the Forum’s earlier reports.

As with the Forum’s previous reports, this report seeks to document the numerous human rights violations in Jammu and Kashmir under five broad heads: civilian security, health, children and youth, industry, and media. Its findings are as follows:

Judging from the announcement that the delimitation commission, appointed under the 2019 Reorganization Act to add seven new assembly constituencies, will only complete its work by March 2022, and elections will only be held after that, the Forum is concerned that the current situation of continuing human rights abuses will continue unchecked, since Jammu and Kashmir will remain under the administration of a lieutenant-governor for at least another year, possibly much longer.

The Forum urges, therefore, that the recommendations made in this third report be implemented without further delay. Many of them have been repeated over the past two years, surely an unconscionable time for citizens to wait for their fundamental rights to be restored.

1. Bureau report, The Hindu, 13 February 2021. Note the anomaly: while Home Minister Shah reassured parliament that statehood would be restored, his ministry continued to dismantle the apparatus of statehood, including its governance services. Shamefully, the Bill was passed by MPs on a voice vote.