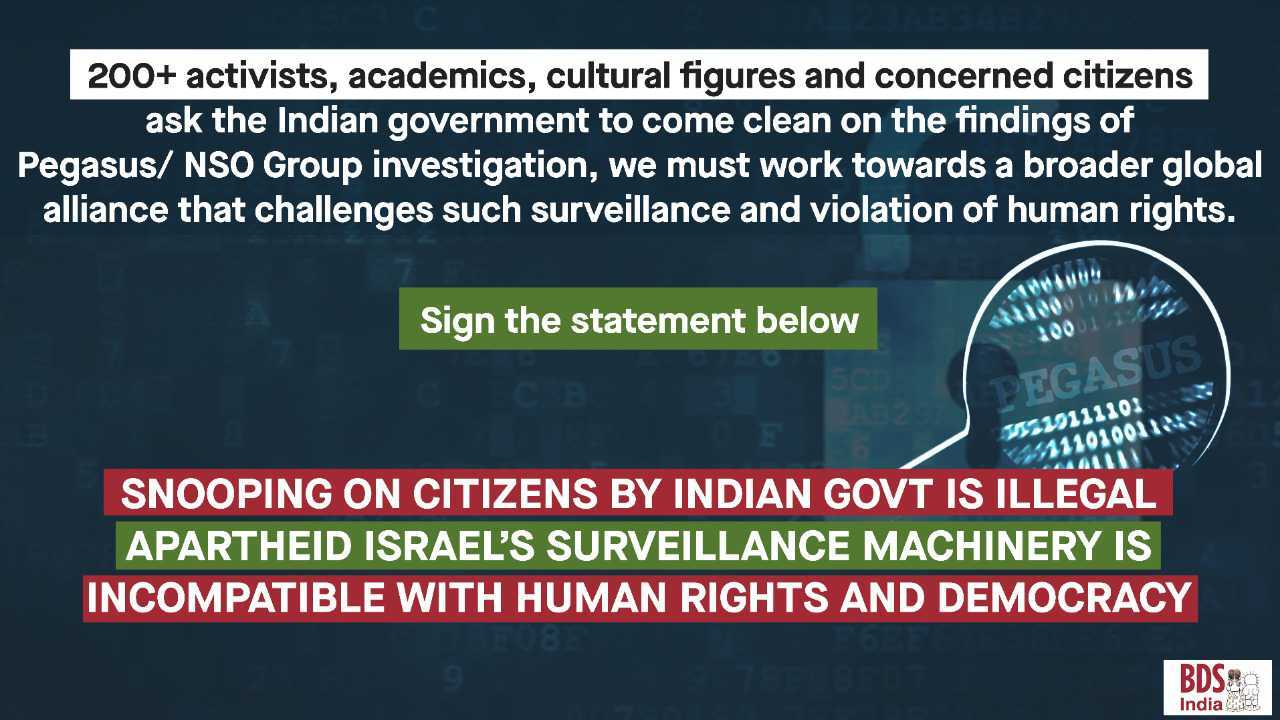 More names of targets – journalists, opposition leaders, even a leading virologist– are still being unearthed as part of the massive reveal regarding the use of Israeli NSO Group’s Pegasus spyware on the smartphones of Indian citizens. Pegasus spyware and the NSO Group itself are part of the matrix of Israel’s apartheid and occupation and are only the latest import of repressive paradigms and methods that our government has imported from Israel.

Amnesty International and Forbidden Stories, a Paris based non-profit were able to access a leak of phone numbers selected as actual and potential targets, which they passed on to Pegasus project- a collaborative investigation by media houses into the NSO Group and its clients. India is one among 10 such clients. NSO Group works closely with the Israeli state, which approves every sale of the company’s spyware, while the company itself claims to sell its products only to “vetted governments”.

This is in addition to the reveal late in 2019 by WhatsApp regarding the use of Pegasus against activists and lawyers, many of whom were connected to the Bhima Koregaon case. It is clear as daylight that the government is out to muzzle with repression or surveillance any voices critical of it and simply placing forth the truth.

Through its cooperation with Israel and the NSO Group, the government does so using technologies that are developed through usage against Palestinians. They are perfected in this way before being sold to clients across the world, who then use it for repression. From Saudi Arabia to Mexico, from Hungary to India- they have been used by regimes to target dissenters, some of whom, like journalists Jamal Khashoggi and Cecilio Pineda Birto, have also been killed.

Therefore, while we ask the Indian government to come clean on the findings of this investigation, we must work towards a broader global alliance that challenges such surveillance and the collusion of governments to gain access to technology built to violate human rights, like in the case of Israel.

The NSO Group needs to be held accountable for the deaths and repression of those targeted by their technology. But this is merely the tip of the iceberg.

The import of surveillance technology is a direct result of a government policy that poses Israel as a model. The Citizenship Amendment Act mirroring the Law of Return and abrogation of Article 370 in Jammu and Kashmir opening the doors for ‘Israel-style settlements’ have been a starting point. The scandal of anti-democratic snooping shows how Israeli methods are being used against anyone that opposes the wills of those in power. Intrinsically, our struggles for democracy and equality are linked to the Palestinian liberation movement, as well as people across the world resisting human rights violations.

We demand and must also build sustained struggles to: