We hug the trees because the trees have no voice: Tricontinental Newsletter

At the 1972 United Nations Conference on the Human Environment, the delegates decided to hold an annual World Environment Day. In 1974, the UN urged the world to celebrate that day on 5 June with the slogan ‘Only One Earth’; this year, the theme is ‘Ecosystem Restoration’, emphasising how the capitalist system has eroded the earth’s capacity to sustain life. The Global Footprint Network reports that we do not live on one Earth, but on 1.6 Earths. We live on more than one Earth because, by encroaching and destroying biodiversity, degrading land, and polluting the air and water, we are cannibalising the planet.

This newsletter contains a Red Alert from Tricontinental: Institute for Social Research on the environmental catastrophe that befalls us. Several key scientists have contributed to it. It can be read below and downloaded as a PDF print out here; we hope that you will circulate it widely. 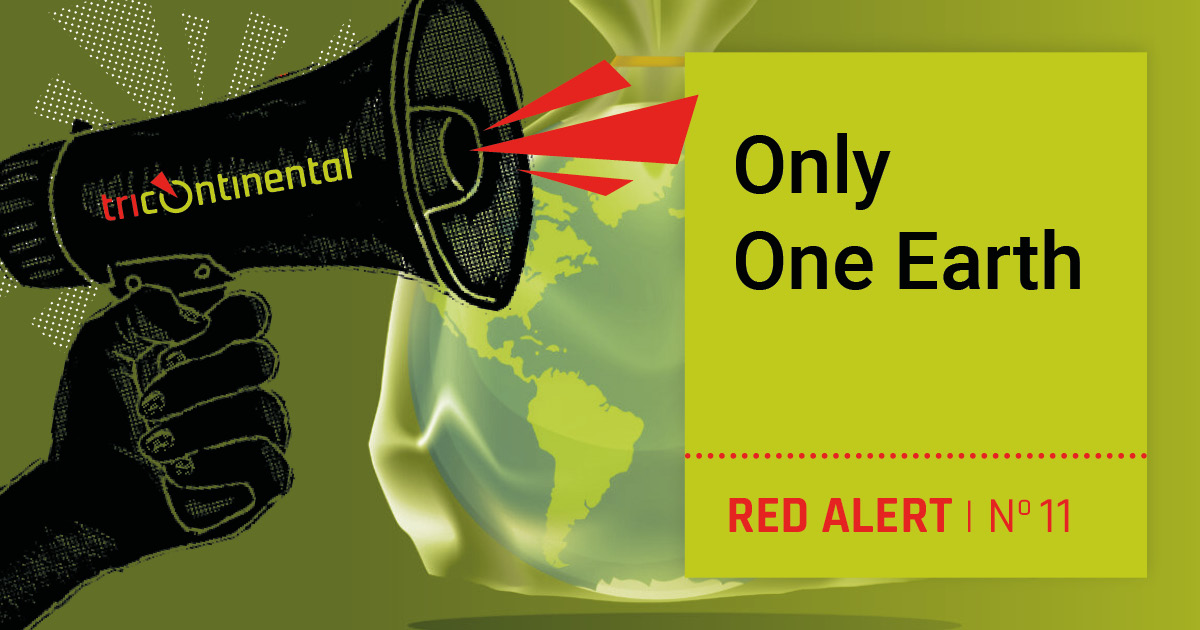 A new report from the United Nations Environment Programme (UNEP), Making Peace with Nature (2021), highlights the ‘gravity of the Earth’s triple environmental emergencies: climate, biodiversity loss, and pollution’. These three ‘self-inflicted planetary crises’, the UNEP says, put ‘the well-being of current and future generations at unacceptable risk’. This Red Alert, released for World Environment Day (5 June), is produced with the International Week of Anti-Imperialist Struggle.

What is the scale of the destruction?

Ecosystems have degraded at an alarming rate. The Intergovernmental Science-Policy Platform on Biodiversity and Ecosystem Services (IPBES) report from 2019 provides stunning examples of the scale of the destruction:

Ecosystem degradation is accelerated by capitalism, which intensifies pollution and waste, deforestation, land-use change and exploitation, and carbon-driven energy systems. For example, the Intergovernmental Panel on Climate Change’s report, Climate Change and Land, (January 2020) notes that only 15% of known wetlands remain, most having been degraded beyond the possibility of recovery. In 2020, the UNEP documented that, from 2014 to 2017, coral reefs suffered from the longest severe bleaching event on record. Coral reefs are projected to decline dramatically as temperatures rise; if global warming rises to 1.5°C, only 10-30% of reefs will remain, and if global warming rises to 2°C, then less than 1% of reefs will remain.

As things stand, there is a good chance that the Arctic Ocean may be ice-free by 2035, which will disrupt both the Arctic ecosystem and the circulation of ocean currents, possibly transforming global and regional climate and weather. These changes in the Arctic ice cover have already triggered a race among major powers for military domination in the region and for control over valuable energy and mineral resources, opening the door even further for devastating ecological destruction; in January 2021, in a paper titled Regaining Arctic Dominance, the US military characterised the Arctic as ‘simultaneously an arena of competition, a line of attack in conflict, a vital area holding many of our nation’s natural resources, and a platform for global power projection’.

The warming of the ocean comes alongside the annual dumping of up to 400 million tonnes of heavy metals, solvents, and toxic sludge (among other industrial wastes) – not accounting for radioactive wastes. This is the most dangerous waste, but it is only a tiny proportion of the total waste thrown into the ocean, including millions of tonnes of plastic waste. One study from 2016 finds that, by 2050, it is likely that there will be more plastic by weight in the ocean than fish. In the ocean, plastic accumulates in swirling gyres, one of which is the Great Pacific Garbage Patch, an estimated mass of 79,000 tonnes of ocean plastic floating inside a concentrated area of 1.6 million km2 (roughly the size of Iran). Ultraviolet light from the sun degrades the debris into ‘microplastics’, which cannot be cleaned up, and which disrupts food chains and ruins habitats. The dumping of industrial waste into the waters, including in rivers and other freshwater bodies, generates at least 1.4 million deaths annually from preventable diseases that are associated with pathogen-polluted drinking water.

The waste in the waters is only a fraction of the waste produced by human beings, which is estimated to be 2.01 billion tonnes per year. Only 13.5% of this waste is recycled, while only 5.5% is composted; the remaining 81% is discarded in landfills, incinerated (which releases greenhouse and other toxic gases), or finds its way into the ocean. At the current rate of waste production, it is estimated that this figure will rise by 70% to 3.4 billion tonnes by 2050.

No study shows a decrease in pollution, including the generation of waste, or a slowing down of the rise in temperature. For instance, the UNEP’s Emissions Gap Report (December 2020) shows that the world at the present rate of emissions is on track for warming by at least 3.2°C above pre-industrial levels by 2100. This is far above the limits set by the Paris Agreement of 1.5°-2.0°C. Planetary warming and environmental degradation feed into each other: between 2010 and 2019, land degradation and transformation – including deforestation and the loss of soil carbon in cultivated land – contributed a quarter of greenhouse gas emissions, with climate change further worsening desertification and the disruption of soil nutrition cycles.

What are common and differentiated responsibilities?

In the 1992 United Nations Conference on Environment and Development declaration, the seventh principle of ‘common but differentiated responsibilities’ – agreed upon by the international community – establishes that all nations need to take on some ‘common’ responsibilities to reduce emissions, but that the developed countries bear the greater ‘differentiated’ responsibility due to the historical fact of their far greater contribution to cumulative global emissions causing climate change. A look at the data from Carbon Dioxide Information Analysis Centre’s Global Carbon Project shows that the United States of America – by itself – has been the largest source of carbon dioxide emissions since 1750. The main historical carbon emitters were all industrial and colonial powers, mainly European states and the United States of America. From the 18th century, these countries have not only emitted the bulk of the carbon into the atmosphere, but they also continue to exceed their fair share of the Global Carbon Budget in proportion to their populations. The countries with the least responsibility for creating the climate catastrophe – such as small island states – are the ones hardest hit by its disastrous consequences.

Cheap energy based on coal and hydrocarbons, along with the looting and plundering of natural resources by colonial powers, enabled the countries of Europe and North America to enhance the well-being of their populations at the expense of the colonised world. Today, the extreme inequality between the standard of living for the average European (747 million people) and the average Indian (1.38 billion people) is as stark as it was a century ago. The reliance by China, India, and other developing countries on carbon – particularly coal – is indeed high; but even this recent use of carbon by China and India is well below that of the United States. The 2019 figures for per capita carbon emissions of Australia (16.3 tonnes) and the US (16 tonnes) are more than twice that of China (7.1 tonnes) and India (1.9 tonnes).

Every country in the world has to make advances to transition from reliance upon carbon-based energy and to prevent the large-scale degradation of the environment, but the developed countries must be held accountable for two key urgent actions:

That is why all of the countries at the numerous Climate Conferences agreed to create a Green Climate Fund at the Cancun Conference in 2016. The current target is $100 billion annually by 2020. The United States under the new Biden administration has pledged to double its international finance contributions by 2024 and triple its contributions for adaptation, but, given the very low baseline, this is highly inadequate. The International Energy Agency suggests each year in its World Energy Outlook that the actual figure for international climate finance should be in the trillions. None of the Western powers have intimated anything like a commitment of that scale to the Fund.

What can be done? 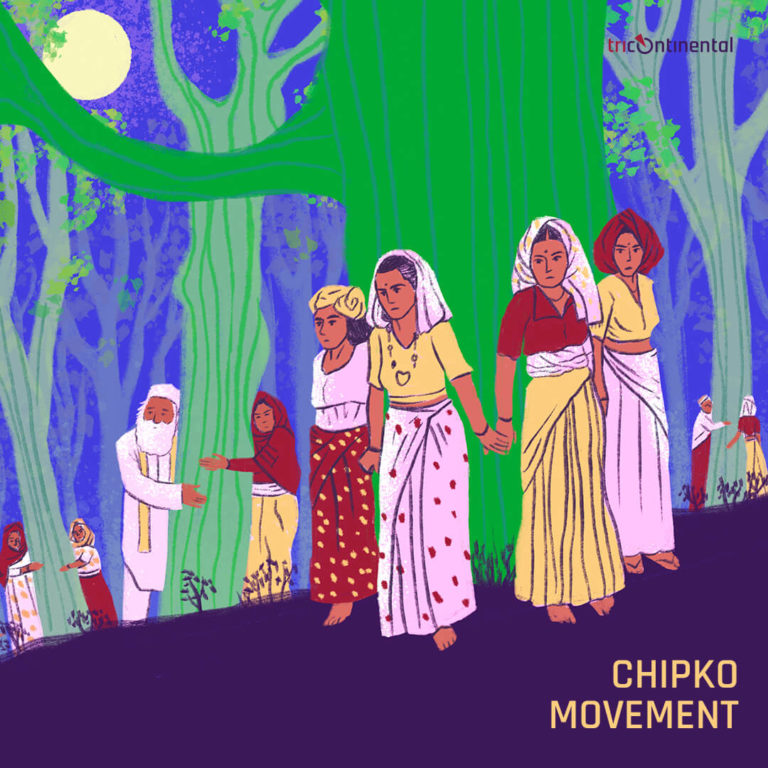 On 21 May, Sundarlal Bahuguna (1927-2021), one of the founders of the Chipko movement, left us. In 1973, in the Chamoli district of India, the government allotted an entire ash forest to a private corporation. Gaura Devi, Sudesha Devi, C.P. Bhatt, Sunderlal Bahuguna, and others decided that they would stop the loggers to defend – as Gaura Devi put it – their maika (‘mother’s home’). The women of Reni village went and hugged the trees, preventing the loggers from cutting them down. This act of hugging, or chipko, gave the movement its name. Thanks to the immense struggle by the people of Chamoli, the government of India was forced to pass a Forest Conservation Act (1980) and create a Department of Environment (1980).

During Bahuguna’s last years, he watched India’s current government actively allow deforestation and land degradation. According to Global Forest Watch, between 2019-2020, India lost 14% of its tree cover, with 36% of its forests severely vulnerable to fires. It is almost as if the forests are calling for another Chipko movement. This time not just in Chamoli or in India, but from one end of the planet to the other.

A crisis of resistance: Aftermath of the Ayodhya judgement

Hindu Right, Hindi and the Impossibility of Appropriating Dinkar and Benipuri – II

Hindu Right, Hindi and the Impossibility of Appropriating Dinkar and Benipuri – I