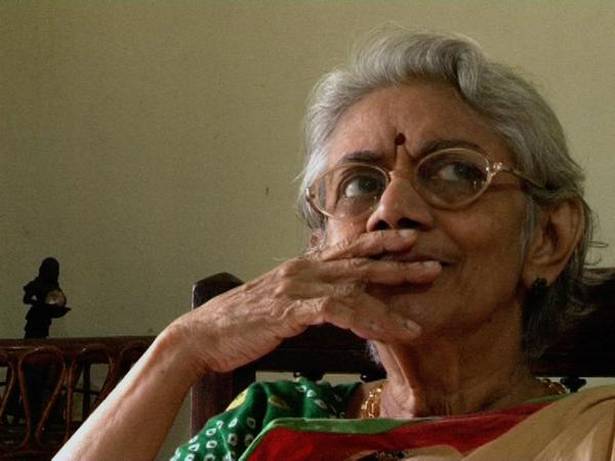 Comrade Mythily Sivaraman, one of the tallest, most beloved leaders of AIDWA since its formative years, its former national vice-president and then its patron, passed away on 30 May at the age of 81 in Chennai, Tamilnadu due to Covid 19 complications. She had been battling ill health for the last few years of her life, but had never been away from our thoughts. AIDWA recalls with love and pride her enormous contributions to our organisation both at the national level and in Tamilnadu.

Mythily was influenced by the international upsurge against the Vietnam War and the struggle of the blacks against racism in the USA, while she worked as a journalist with the UN in the 1960s. She returned to Chennai with a passionate commitment to Left ideology and threw herself into the working class movement and was engaged in unionizing women workers under the aegis of CITU.

Her training as a journalist enabled her to document oppression and violence with authenticity, and at the same time with her simplicity and approachability she played an energetic role in mobilising and organizing women belonging to the labouring poor both among workers and peasants. Her remarkable interventions in the Keezhvenmani brutal massacre of Dalit agricultural workers demanding just wages, and later in the Vachathi mass rapes of tribal women, were testimony to both these rare qualities. She founded the AIDWA journal in Tamil – Mahalir Sindanai (Women’s Thoughts), of which she was the editor for many years.

Issues of dowry crimes, sex-selective abortions and of violence sponsored by the state were successfully confronted by AIDWA under her able leadership. Not only in her speeches and writings both in Tamil and in English, but in all activities in which she engaged, she was able to bring out the intersection of class and caste with gender issues and was equally at ease whether on an international platform or in a colloquial street corner  meeting. The many writings authored by her in well-known journals were in fact supplements to her activism. Some of these have been collated and published in the book Haunted by Fire: Essays on Caste, Class, Exploitation and Emancipation.

AIDWA shares the grief of her life-partner Comrade Karunakaran and her daughter Kalpana Karunakaran and dips its banner to pay homage to the memory of this most extraordinary leader and intellectual of the women’s and the workers’ movements.