Over 600 musicians join #MusiciansForPalestine in support of Palestinian rights 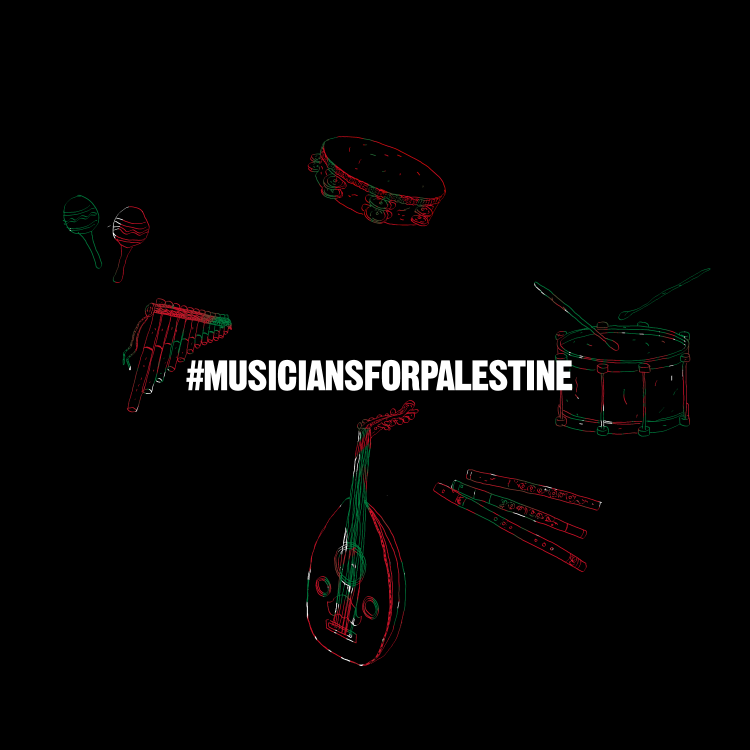 May 27th at 9:00am EST marks the launch of #MusiciansForPalestine, a letter from more than 600 musicians that says, “we speak together and demand justice, dignity and the right to self-determination for the Palestinian people and all who are fighting colonial dispossession and violence across the planet.” Support comes from artists from the Palestinian diaspora including Belly and Anwar Hadid. A-Trak, Black Thought and Questlove from The Roots, Cypress Hill, DJ Snake, Julian Casablancas, Juliana Huxtable, Majid Al-Maskati, Mustafa the Poet, NARCY, NoName, Patti Smith, Run the Jewels, Serj Tankian of System of a Down and Thurston Moore are also among the signatories to the call, which adds: “We call for you to join us with your name in refusing to perform at Israel’s complicit cultural institutions, and by standing firm in your support of the Palestinian people and their human right to sovereignty and freedom. We believe this is crucial to one day live in a world without segregation and apartheid.”

The #MusiciansForPalestine’s letter has been welcomed by the Palestinian Campaign for the Academic and Cultural Boycott of Israel (PACBI), a founding member of the Boycott, Divestment and Sanctions (BDS) National Committee, the largest coalition in Palestinian society, who wrote: “Thank you, #MusiciansforPalestine! Your meaningful solidarity reminds Palestinians that after the ceasefire, our struggle for liberation, freedom, justice and equality will not be forgotten. This week alone, thousands of artists have endorsed peaceful measures to hold Israel to account under international law, in support of Palestinian human rights. We salute the artists, cultural workers and arts institutions who recognise their ethical obligation to do no harm to our nonviolent struggle against Israel’s colonial rule, by ending links of complicity. Let Israel’s latest massacre be the last! It’s time to #CeaseApartheid. Dismantling apartheid is #InOurHands!”.

This week alone, thousands of artists have endorsed peaceful measures to hold Israel to account under international law, in support of Palestinian human rights.

Iraqi-Canadian multi-media artist NARCY stated his support of the project: “It’s crucial that we amplify this cause and stand for Palestinian rights at this critical juncture. The bombing of besieged Gaza, and the imminent risk of ethnic cleansing in the Sheikh Jarrah neighborhood of occupied Jerusalem brought the dispossession Palestinians have faced over the past 73 years to the world’s attention.”

It’s crucial that we amplify this cause and stand for Palestinian rights at this critical juncture. The bombing of besieged Gaza, and the imminent risk of ethnic cleansing in the Sheikh Jarrah neighborhood of occupied Jerusalem brought the dispossession Palestinians have faced

According to The Guardian, from May 10th until May 22nd’s ceasefire announcement, Israeli forces killed at least 243 Palestinians with more than 1900 wounded. Twelve people in Israel were also killed by Palestinian armed groups.

NARCY’s message continues: “If you don’t know, now you know. In recent weeks we have seen videos of the Israeli military storming the third holiest Muslim site in the world during the holy month of Ramadan. We have seen gangs of settlers and anti-Arab Israelis chanting “Death to Arabs” in the streets while they looted Palestinian businesses, we have seen a man lynched on live Israeli TV. This has shown the world a microcosm of the Israeli occupation. This letter makes it clear that, as musicians, we must not be silent, we must take a stand against apartheid.”

Signatories Rage Against the Machine recently stated on Instagram: “The violence and atrocities we are witnessing in Sheikh Jarrah, the Al Aqsa compound and Gaza are a continuation of decades of Israel’s brutal apartheid and violent occupation of Palestine. We stand with the Palestinian people as they resist this colonial terror in all its forms.”

The letter is also supported by Israeli musicians Meira Asher, Ohal Grietzer, Jonathan Ofir, Dudik Oppenheim, and Michal Sapir who support the #MusiciansForPalestine initiative writing: “We long to live and create in a democratic and peaceful society, yet Israel is a colonial state that subjects Palestinians to brutal occupation, siege, and dispossession. Together with Musicians for Palestine we reinforce the call of our Palestinian peers to refrain from performing in Israel as long as Israel maintains its apartheid regime.”

Together with #musiciansforpalestine we reinforce the call of our Palestinian peers to refrain from performing in Israel as long as Israel maintains its apartheid regime. pic.twitter.com/ejr8RHeF5R

#MusiciansForPalestine joins other letters (read here and here) of support for Palestine released this week across the arts including #VisualArtsforPalestine, and the Letter Against Apartheid.

The BDS movement was founded in 2005 and has three aims: the end to Israel’s military occupation; equality for Palestinians with Israeli citizenship; and the right to return for Palestinian refugees.

Read the full letter and list of signatories here.