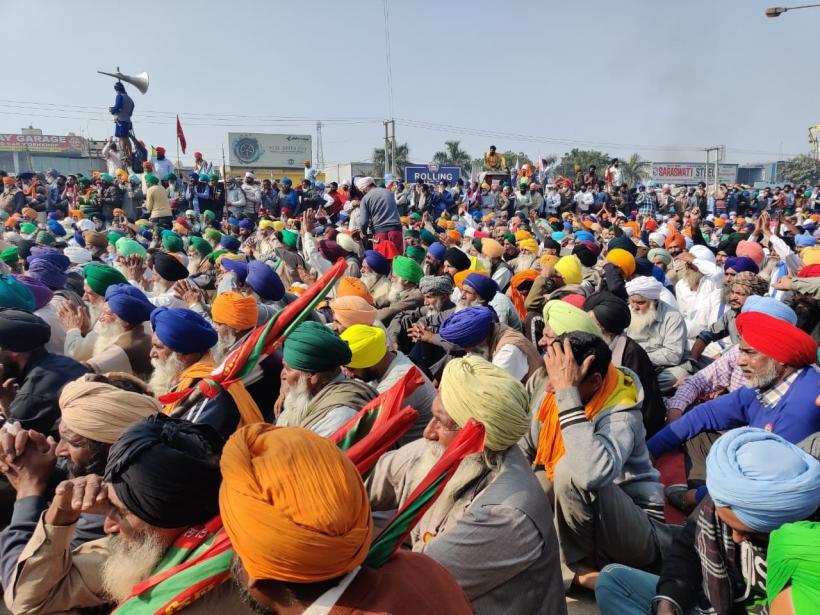 Against all odds, the farmers’ revolution completes six months on Wednesday. Congratulations, India! Do not be confused by TV news streaming inane declarations about “Black Day” and the farmers’ black flags. May 26 is the first vaccine dose for Indian democracy. The cat-and-mouse game between farmers and the Modi-Shah duo may soon have a winner. The Machiavellian theatre of the last six months, with uniformed men, surveillance and anchors in glossy studios, has failed to dampen the revolutionary spirit. Each day, the revolution marches on.

Why so? Let us quickly recap: Modi imposed the three farm laws on the country last autumn, keeping corporations and agri-dollars in mind. The farmer unions from Punjab mobilised and began a peaceful protest march to Delhi in November. Beaten, tear-gassed, mobbed by water-cannons, yet undefeated, they have encamped ever since at the Singhu, Tikri and Ghazipur borders of the capital.

Thousands of women, the elderly and young farmers thronged to these protest sites all winter. They were dismissed as a “handful of farmers” from Punjab, “Khalistanis”, “terrorists”, “andolanjeevis” and “provocateurs” responsible for the violence at Red Fort in which the supporters of the Supreme Leader were implicated. Once propaganda failed, goons landed up to attack the farmers’ encampments.

The bombardment of hate and violence only strengthened the farmer struggle and the world’s largest and most disciplined non-violent uprising was born. The strategy of the Indian farmer is one of astute political wisdom, combining lessons from global farmer movements and the Occupy Movement to deliver a jab to the “most-favoured” corporates in the current dispensation. The revolution exposed a kleptocratic regime by issuing calls to boycott the Forbes-sheeters. The global farming community recognised the patterns and quickly extended support. For the first time, Indian farmers forged broad national solidarity and found allies all over the world.

But of course, there came a response from the ruling government and it was in the form of more self-generated problems at home. So, the communal divide et impera card was played. Mind you, great armies and political parties have kneeled before this stratagem. Ethnic differences were fomented within the farmers, a potion of “separatism” was dropped in too. Even though painted TV anchors spewed nasty incantations, many more people turned towards the revolution’s side. A song of unity arose in the farming communities and beyond. For example, the Jat community, leaving aside differences, is rallying behind the Samyukta Kisan Morcha. It seems the community has shed the pain of the Jat reservation agitation and the youth, whether in Pipad or Hapur, now shares the electric spirit of revolution and pride.

Maharashtra, Karnataka, Tamil Nadu—no state has ignored the call of this mass movement. The farmer’s revolution has made farmers into a political class. Other agrarian movements such as the Ryot Sangha of Karnataka and scores of others have galvanised thousands, if not millions, in their support.

Former prime minister late Chaudhary Charan Singh’s talisman to farmers was to “identify your enemy and learn how to speak to farmers.” Today, the farmers have locked on to their enemy, the Big Ag corporations, and social media and youtube have the farmers talking more sense than political science students about their concerns. The main stages at their encampments have roared with ordinary voices taking a stand against this neo-company raj.

The farmer’s revolution has completed the Herculean task of uniting the farmers under one banner. Despite dealing with the multiple nightmares of planning for mass gatherings during a pandemic, and assuring security, food and water supplies for six long months, they have not faltered. They have also forged new alliances with other movements. For example, issues related to caste oppression, Dalit rights, have found a prominent place in it. Farmer leaders often include these issues in their speeches and prominent Dalit leaders and outfits that represent Dalit and landless workers’ interests have taken centre stage in these protests too. Their brothers and sisters—small traders, factory workers, labourers, tenant farmers, etc, are with them too. No one is left behind, the Supreme Leader’s followers included. All this has manifested between winter and today.

When issues raised by small traders, such as the dissolution of APMC acts or the direct benefit transfers issues come up, farmers’ started campaigns for them. They also demanded that jailed public intellectuals be freed and women’s rights are protected. Women leaders have stood up to seek gender parity within the farming communities. Police reform and revival of police pension schemes have been a touchy topic for the current regime but farm leader Rakesh Tikiat has openly demanded these. This has also brought many police personnel over to the side of the farmers.

By sewing together different issues from climate change, minority rights, press freedom, etc, the farmers have rejuvenated the idea of a new issues-based coalition, irrespective of political inclinations, and created a new political platform. And yes, the ruling regime is concerned about this development. The government is running out of tricks to trip the movement, and all this while, a sea of citizens has switched over to support the farmers’ cause. The corporatisation of agriculture is a hot potato in India. Who knows—the revolution may have seeded Indian democracy towards a more green politics or even an Indian green party soon.

The revolution reorients India towards non-violence. The blockades staged by farmers have rattled the Chief Minister of Haryana Manohar Lal Khattar on multiple occasions. Another recent victory was when Haryana, to ward off a permanent blockade by the agitating farmers, agreed to withdraw 350 cases filed farmers and compensate those whose vehicles were damaged after they faced brute police force in Hisar on 16 May.

The farmers’ Gandhian style of protest is working. Keeping political milestones aside, the residents of the protest encampments know that another new kind of society is sprouting a new paradigm of the gift economy. The camps offer free food, water, shelter, medical care and clothes, even as part of “Seva”. So, many destitute and poor children have been fed on the kindness of farmers for months now. In this greed-driven economic scenario, the farmers represent a new model for a society based on cooperation and sharing. Today, each camp provides a common space to talk, discuss, argue and be part of a brotherhood. They have created a new melting pot in these COVID-19 times, when half the country is locked up, unemployed and hungry.

Agro-economically speaking, the farmers have exposed the PM Modi-led government’s schemes to steal the farmer’s rights over seeds through the new Seed Bill. Farm leaders have not shied away from explaining the impact of such new legislations to the millions they have addressed over the last six months. They have categorically named corporate behemoths such as Cargill, Walmart, and others so that each farmer and every Indian can identify who they consider the enemy of farmers and food security.

Finally, the farmers have turned a protest against the farm laws into a nationwide revolution. Surprisingly, the movement is disinterested in just regime change but stands for a radical paradigm shift. They present before the world a new vision for equality and fairness rooted in caring for the land. They want an India where farmers and rural labourers have the right to dignity and equality. An India which does not only serve corporate masters but works for all Indian citizen’s right to food, health and freedom. They want an India where farmers get fair prices for their labour. They want a system for the people, not for the profits of a few greedy men.

First published in Newsclick.
The author writes on agriculture and the environment and is the former director of Policy and Outreach, National Seed Association of India.
Disclaimer: The views expressed in this article are the writer's own, and do not necessarily represent the views of the Indian Writers' Forum.