“Quest for Equity: Reclaiming Social Justice, Revisiting Ambedkar” was the title of an international conference hosted by the government of Karnataka in 2017. The five-volume Quest for Justice, edited by Aakash Singh Rathore, presents 54 papers selected from the more than 350 that were read at the three-day event. Taking in biography, history, law, economics and contemporary politics in India and the world, the volumes have been organised under five themes: political justice, social justice, legal and economic justice, gender and racial justice, and, religious and cultural justice.

Volume Five of The Quest for Justice divides into two halves, dealing with religious and cultural justice. In the Foreword, Kancha Ilaiah Shepherd highlights the spiritual injustice of caste which shuts out OBCs, dalits and adivasis from the priesthood, and from heaven. He notes that the Constitution has enabled India to acquire, at the present moment, a dalit president, shudra vice president and OBC prime minister. But their rise to high office is the fruit of a pact whereby electoral logic will not extend to religious reform. Each of the three functionaries has advanced in his career by serving a Sangh where the top office is the exclusive domain of the ‘upper’ castes. The increasing threat to freedom of religion in India emerges from this failure to apply constitutional liberties within religious life, whether to women or the oppressed castes in every Indian religion. The repercussions for secular life have been severe.

The following excerpt is from Jadumani Mahanand’s paper “Ambedkar in/and Academic Space”. Taking Ambedkar as an example, Mahanand demonstrates how the caste profile of India’s university departments continues to impact secular scholarship, whether marxist or liberal, imbuing it with the assumptions, prejudices and artful dodges of brahminism. 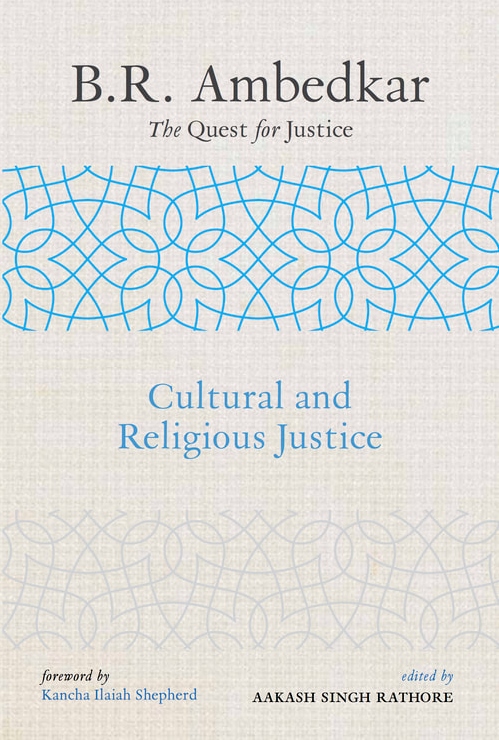 Since the death of Rohith Vemula, the existence of caste discrimination on the campuses of Indian universities has become common knowledge. The Thorat committee report of AIIMS revealed the different forms of caste discrimination that exists in subtle ways. This is crucial evidence that speaks volumes regarding the nature of the academic space in India—in a way, such practices spell out the hidden sociocultural positions attached to professors, staff, students, and even high-ranking officials in educational institutions. The university is not outside of society, it is a part of society; social and cultural practices are often reflected in the behaviour of the university community. N. Sukumar aptly writes of universities as modern agraharas (N. Sukumar 2016), an agrahara being an area where Brahmins live. Today, one may witness upper castes exercising the rights traditionally ascribed to them. Since Independence, academic discourse has been—in terms of knowledge production and domination—controlled by Brahmins and upper castes who are at the top of the caste hierarchy (that is, twice born). One may also witness the top twice born (TTB) migrating to foreign universities and, thereby, playing a strong role in the production of knowledge worldwide.1 Traditionally, education/knowledge as a source of power is ascribed and assigned to Brahmins according to the Varnashramadhrama (Santosh and Abraham 2010).

The university as a public academic space in India has been hegemonized by the TTB. The TTB maintain the purity of knowledge in universities by controlling their courses, syllabi, and curricula, thereby also reserving the highest positions for themselves. This is visible in the statistics on high-ranking administrative positions in universities: out of a total of 496 vice chancellors, 6 are SC, 6 are ST, and 36 OBC.2 In this context, how should we understand academic space in India? How do Indian academics understand the questions raised by Ambedkar in his intellectual, social, and political discourses?

The National Council of Educational Research and Training (NCERT) prepares the syllabi for intermediate–to high school–level education. Among the various textbooks prepared by the NCERT for social sciences, Ambedkar can only be found in political science textbooks, that too not as a thinker/theorist of the social sciences but as a Dalit leader. Ambedkar’s introduction in the second edition of the NCERT history textbook is little more than a symbolic gesture, as his name appears in a discussion on the Poona Pact of 1932. This appearance of Ambedkar is less than a page long, and is primarily for the purpose of highlighting his confrontation with Gandhi. In the textbooks of subjects such as sociology and economics, Ambedkar’s name does not even make an appearance. By way of comparison, one may consider M.N. Srinivas and G.S. Ghurye’s writings on caste, which are included as core studies in the syllabi of sociology, as they are considered to be scholarly. Ambedkar’s writings on caste and gender are unknown even to the sociologists and anthropologists who prepare the syllabus.

The worst offenders are the philosophy and economics textbooks in which Ambedkar is nowhere to be found from intermediate level all the way up to MA programmes. This is in spite of Ambedkar’s doctorate in the discipline of economics and his numerous path-breaking writings in the field. Vivek Kumar argues that Ambedkar is not considered to be a sociologist in India (V. Kumar 2016, 18). Aakash Singh Rathore writes, ‘Despite the number of university buildings and centres named after B. R. Ambedkar in India, there are disproportionately few of Ambedkar’s texts on the syllabi of any of the serious research departments in the country’ (Rathore and Verma 2011). The Ambedkar chairs in some of the universities exist without any Ambedkar course on the curriculum, and most of the chairs are non-functional. There are no MPhil, PhD, or Post-doctoral programmes offered by Ambedkar centres and chairs in India. The centres and chairs exist merely to celebrate Ambedkar Jayanti or conduct uninspiring conferences on routine themes in a ritualistic manner.

A decade ago, Gopal Guru wrote ‘How egalitarian are the social sciences in India?’ (Guru 2002). The article lighted a spark amongst the TTB academics as they attempted to respond to Guru’s critique. This question is still prevalent in discussions on university campuses, but is only raised by Dalit students. In another context, Johannes Beltzs remarks that the sociology community has so far largely ignored Ambedkar, which is surprising because his analysis of Indian culture, the caste system, authority and religious power, and the religious foundation of the Hindu social order are significant contributions to contemporary debates in sociology. Similarly, Vivek Kumar writes, ‘[P]ossibly, Ambedkar was the first Indian trained in sociology and anthropology from a foreign university, who also published his article in a foreign journal. Yet he was not included in the list of founders of anthropology and sociology in India’ (V. Kumar 2016). Aakash Singh Rathore writes:

In the field of postcolonial studies, Ambedkar has been all but ignored. Postcolonial theory is another field of study dominated by high-caste intelligentsia, but insofar as this group is generally radical and leftist, it is difficult to attribute their exclusion of Ambedkar to class or caste bias. (Rathore and Verma 2011, xxii)

Taking a cue from Guru, knowledge is historically controlled and monopolized by the TTB. In other words, intellectual activities maintain the hierarchization of knowledge. Knowledge becomes a criterion for exclusion, particularly when we look at the syllabus, curriculum, and methodology used in the production/distribution of knowledge.

The general perception of Ambedkar amongst Indian academics is that his thought is limited to caste and untouchability, and that his writings, speeches, and politics are cynical and derogatory towards Hinduism. This characterization is subtly to be found everywhere. Political theorist Rajeev Bhargava writes, ‘[the] great Dalit leader B R Ambedkar’ (Bhargava 2017). Similarly, Sudipta Kaviraj writes, ‘Ambedkar, undoubtedly the pre-eminent leader of the Dalits in modern India’ (Kaviraj 2017). The TTBs are generally not referred to by the names of their castes. Ambedkar, on the contrary, is frequently delegated to being representative of the Dalits. At the same time, he is not recognized as a political philosopher or a sociologist, or as an economist.

In this context, Aakash Singh Rathore charges Indian political theorists with a stubborn resistance to consider Ambedkar as a serious thinker.

I have encountered over and over again a profound resistance against introducing Ambedkar not only into the curriculum, but even across the thresholds of the doorways to philosophy departments. … A thesis on Gandhi? Fine, carry on. Bilgrami said it’s ok. A thesis on Ambedkar? The committee erupts in chorus: “but he is not even a philosopher!”3

Several scholars, arguing along similar lines, raise the question of why Indian academia ignores Ambedkar.4 Thus it is well enough established that this is not a question of if, but of why.

Indian academics seem to have failed to transgress their own social identities—their ontological position remains intertwined with their social identity. Thus, one must not be surprised to realize that various sorts of untouchability are being experienced on university campuses by Dalit students. Ranging from the experiences of students in their relationships with their teachers to their experiences with other students and even those with the non-teaching staff; in each case they find themselves being treated in certain ways based on their identity, not only as a part of the hierarchy in the administrative functioning and the teacher–student relationship but also as an implicit bias against students in reserved seats who are considered to not be as worthy as students in unreserved seats. Dalit and Adivasi students, in particular, face discrimination stemming from these notions in all spheres of academic life, whether they are availing of their fellowships or in the process of writing their synopses. The casteist mentality and behaviour of students in unreserved seats, teachers, and the non-teaching staff often associate students from marginalized backgrounds with Ambedkar, thereby attaching several other connotations to them, sometimes even displaying outright contempt. For example, the Rajiv Gandhi National Fellowship (RGNF) holders of several states and central universities are often humiliated by fellow students, the office staff, and others.

The experiences of Dalit and Adivasi students, research scholars, and faculty members need to be considered in order to better understand this new form of ‘academic’ untouchability. To illustrate by way of some of the problems experienced by several Dalit and Adivasi students and researchers: according to them, they find it difficult to express original ideas in the classroom, while writing their synopses or their examinations, while presenting at seminars and conferences, and in writing their research papers and dissertations. They are often pigeonholed by their identity: when they raise questions and articulate their ideas or their perspectives, they are greeted with such reprimands as ‘your language is unsophisticated’, ‘you always get sentimental when raising questions’, ‘Dalit and Adivasis students are weak at conceptualizing their ideas’, and ‘Dalit and Adivasi students and researchers employ the language of the activist, the politician, and the polemicist, but not that of the academic’. They are also greeted with such questions as, ‘Why do you study here? You’d be better off doing field work.’ On the occasion of a Dalit research scholar writing a dissertation that is on a par with other students, TTB examiners may be found to quip, ‘It was beyond our expectation to see a well-argued thesis from you’.

If Dalits intend to do research on Ambedkar, they are generally discouraged from doing so, and it is difficult to convince a TTB supervisor otherwise, for he/she often accuses Dalit students of speaking from a purely subjective position. This is the language that is employed by the TTB academia when engaging with Dalit and Adivasi students. The same work, if conducted by non-Dalit students, is deemed scholarly and interesting.

This is an excerpt from the fifth volume, Cultural and Religious Justice, of the five volume collection of essays titled BR Ambedkar: The Quest for Justice edited by Aakash Singh Rathore and published by Oxford University Press. Republished here with permission from the publisher.

Fear Within, Violence Outside