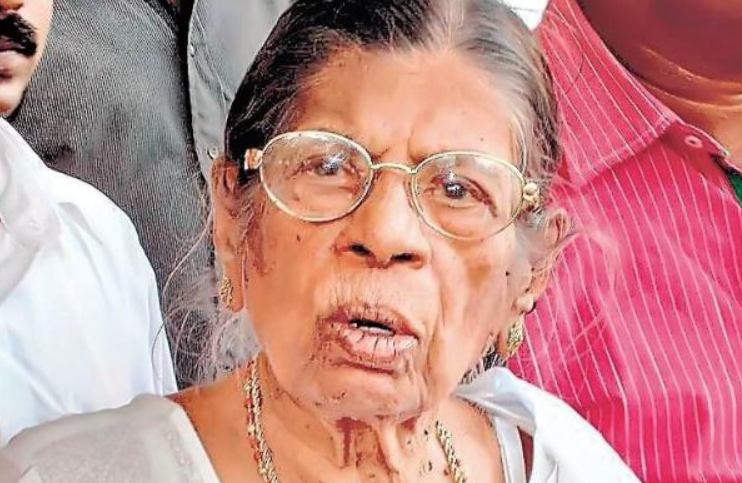 Thiruvananthapuram: Legendary Marxist firebrand and former minister K R Gowri, one of the founding leaders of the communist movement in Kerala and the lone woman member in the state’s first cabinet, died at a private hospital here on Tuesday.

She was 102 and had been suffering from various age-related ailments for some time, party sources said.

The chief of Janadhipathya Samrakshana Samithi (JSS), the veteran politician breathed her last at 7 a.m while undergoing treatment in the ICU, they said.

One of the most powerful and tallest women leaders of Kerala politics, Gowri Amma, as she was fondly called, belonged to the erstwhile communists who had toiled hard to build up the Left movement in the southern state, battling police brutality under the colonial regime and stiff opposition from the then administrators.

Her vibrant political activism, fierce fights against the feudal system, strong stand taken for the women cause and exceptional administrative acumen have garnered her the nickname ‘iron lady’ and helped her carve an exclusive space in the male-dominated politics of Kerala.

She was the lone surviving member of the first Kerala legislative assembly headed by legendary Communist leader EMS Namboodiripad in 1957 and the only woman in the first state cabinet.

As the Revenue Minister in the Namboodiripad’s ministry, Gowri Amma played a key role in bringing the revolutionary Agrarian Relations Bill, which set the ceiling on the amount of land a family could own, paving the way for the landless farmers to claim excess land.

She was married to late communist leader TV Thomas, who was also her cabinet colleague.

After the split in the Communist Party in 1964, Gowri joined the CPI (Marxist), while her husband remained with the CPI.

Born on July14, 1919 in the sleepy Pattanakkad village of coastal Alappuzha to K A Ramanan and Parvathy Amma, Gowri was attracted to politics at a young age.

She was jailed in 1948, the year she joined the Communist Party and defied adversities and fought many odds to build the party.

Gowri, who never minced words to put her thoughts across, was elected to the Travancore-Cochin legislative assembly in 1952 and 1954.

After her successful foray to the state legislature in 1957 from Cherthalain Alappuzha, there was no looking back.

She represented Cherthalain 1960 also after which she moved to Aroor and represented the constituency in the Assembly eight terms from 1967-2006.

She was the longest serving MLA after late K M Mani. During the 1987 elections, though she was projected as the Chief
Ministerial candidate, and was allegedly sidelined by the Marxist party which preferred E K Nayanar for the top post.

A fighter and a rebel throughout her life, Gowri did not mind floating a new political outfit- Janadhipathya Samrakshana Samithi (JSS)- from the scratch after being expelled from the CPI(M) in 1994.

She had also the distinction of being the first woman law student from the Ezhava community.

She was involved with the Kerala Karshaka Sangham and Kerala Mahila Sangham also.

She had celebrated her 101st birthday in June 2019 and various politicians, including Chief Minister Pinarayi Vijayan had flocked to her residence in Alappuzha to greet her.

Meanwhile, cutting across party lines, condolence poured in from various corners of the country expressing deep grief over her demise and hailing her contributions.

In his condolence message, Governor Arif Mohammed Khan said Gowri Amma, with her extraordinary courage and inspiring leadership, was a perfect symbol of women empowerment.

Pinarayi Vijayan termed Gowri as a brave woman who had made her own life a heroic story of the liberation struggle of the land.

A courageous fighter and an able administrator, she had played an unparalleled role in building up the communist movement in Kerala, he said in his message.

‘Kerala has always seen her as the symbol of valour… She was a person who had fought and established that woman has her own face and identity. It was the Communist movement that had given her strength that time,” Vijayan said.

Congress leader Rahul Gandhi remembered her as a “tall presence in Kerala’s politics”.

Senior BJP leader and union minister V Muraleedharan said Gowri was able to make her own space in politics at a time when women were not active in the public sphere.

Her mortal remains were kept for a brief public homage at Ayyankali Hall here, adhering to COVID protocol.

NewsClick adds: In a condolence message, Sitaram Yechury, General Secretary, CPI(M), expressed “deep pain and grief” on the death of K.R. Gauri Amma, “an outstanding leader of the people’s movement in Kerala.”

Yechury said Kerala had lost one of its illustrious daughters who commanded wide respect and admiration.

“She is credited with being one of the architects of land reforms in Kerala,” Yechury said, adding that in her “departure Kerala has lost the last among the remaining members of the 1957 Communist Ministry headed by EMS Namboodiripad.”