To reflect, to breathe, to hope and to stay human: Review of Hybrid War poster exhibition

The Tricontinental: Institute for Social Research and International Week of Anti-Imperialist Struggle organized four poster exhibitions over the last year on different themes related to imperialism 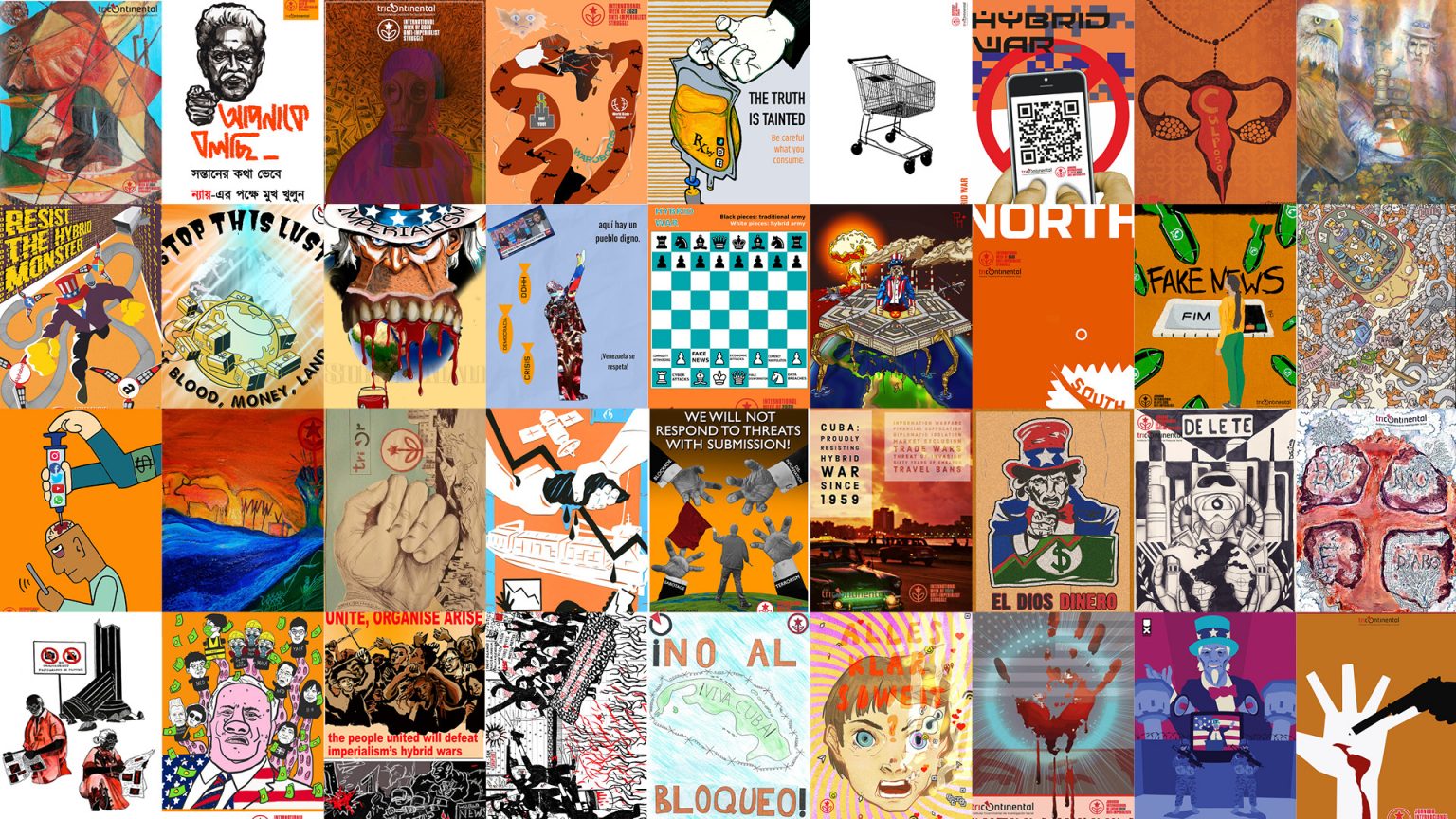 In the middle of our pandemic year, 162 artists from 30 countries and 27 organizations contributed to the Anti-Imperialist Poster Exhibitions. They responded to a series of open calls to make posters that give expressions to four defining concepts of our time: capitalism, neoliberalism, imperialism and hybrid war. It was an experimental process, jointly organized by Tricontinental: Institute for Social Research and the International Week of Anti-Imperialist Struggle.

The overwhelming response from all corners of the globe affirmed something of the human spirit—that in one of the most challenging times in living memory, human beings do not create despite their suffering, they create out ofit. That the concrete impacts of these four core concepts do not impede but compel creative expression. The calls gave confidence to working people to represent their own realities, while contributing to a collective process.

In an event organized by The People’s Forum, two exhibition participants, Judy Seidman (South Africa) and Oscar Coraspe (Utopix/Venezuela), came together in a discussion on CoronaShock and Art (full recording of the event here), moderated by Tings Chak, exhibition co-curator and lead designer of Tricontinental. The conversation brought practices and wisdom across generations and regions, including the exiled cultural group, Medu Arts Ensemble, working towards South African liberation in the 1980s to Utopix, a cultural community formed out of the trenches against US-imposed hybrid war in Venezuela. One central question was, what are the tasks of artists of cultural workers involved in uplifting people’s struggles in the time of a global pandemic?

These are among the tasks set out for us so that we can “Not only to stay alive, but to stay human”, quoting George Orwell’s Nineteen Eighty-Four. This is some of the offerings that the Anti-Imperialist Poster Exhibitions bring for a process still very much in process. Here are some reflections on Hybrid War, the fourth and final in this series exhibition, collecting work from 39 artists in 18 countries.

Hybrid war is not a simple concept to grasp, because it is not one thing. In some—relatively few—cases, it means direct military intervention by the imperialist power, but most often it means war by other means. These other means include sanctions, blockades, fake news, bribes, engineering economic or social unrest and coups, both soft and hard. It is a challenge, then, to represent this concept graphically.

The designs chosen here use a variety of artistic methods to convey their ideas—or hybrid forms, in other words. Jorge Luis Rodríguez-Aguilar (Cuba), for example, portrays the concept in the simple, yet effective, barcode, taking the viewer directly to Tricontinental’s dossier no.17, Venezuela and Hybrid Wars in Latin America.

The hybrid forms are many. Andrea Busi’s (Italy) Chessboard clarifies the difference between traditional and hybrid war tactics through a game of chess. There is the paper collage in Zaira Desiré Coronel’s (Argentina) El Grito (no. 6), the digital collage Robert Streader’s (UK) We Shall Not Submit, the multi-media methods of Ghalmi Othmane’s (Morocco) War Hole (no. 8), and the childhood favourite of colour pencils in Giovanni Montena’s (Italy) The Economic War Against Cuba.

The exhibition seems to provide a diversity of hybrid forms, as diverse as the tactics of hybrid war itself.

We live in a world where truth seems to mean little. Life seems only liveable when surrounded in an ecosystem of ideas that provide comfort, not contradiction. This world of misinformation circulates on our cellphones, our devices and our mediascape.

A man being tranquilized with a syringe-full of social media in Choo Chon Kai’s (Parti Sosialis Malaysia) (Dis)information Warfare poster shows. Bombs of fake news bombard Whatsapp in Gabrielle Sodré’s (Brazil)’s Fake News and the Battle of Ideas, reminding us of the lawfare and process that sustained Jair Bolsonaro’s presidency in Brazil. We become ammunition for hybrid wars.

Technology and telecommunications, like any other commodity, transcends borders and at the heart of financial capitalism. In Arjun Raman and Cadie Buckley’s (Unfunded Science/Alaska) Waroboros, a snake with the Pentagon building and IT multinationals for a brain is encircling Africa as it prepares to swallow it. People’s resistance to encirclement must start from breaking the false premise of freedom of the press and neutrality of information. Otherwise, as Madhuri Shukla’s (USA) Wring shows us, we will be looking at reality through the cell phone instead of our own eyes.

Everyday life is filled with monsters—not the “Boo!”-in-the-night sort, but the kind that saps away the life force of humankind. As Suhail Al-Ali’s (Palestine/Lebanon) US imperialism is the bloodsucker of peoples and the plunder of their wealth depicts—imperialism, our modern-day terrorizer, has an unquenchable thirst for human life and labour.

Other carnivorous creatures are cloaked in darkness: Banks. Insurance. Retail-tainment. Digital surveillance. Data mining. Social media. Clandestine coups and puppeteers behind so-called ‘human rights demonstration’. Some monsters extend their tentacles to orchestrate covert attacks on their enemies, as we see in the anonymous submission from Hong Kong (China), Foreign Interference in Hong Kong.

All form a part of the monster of the marketplace. When it sees resistance or rebellion from a people, it shapeshifts into The Hybrid Monster, as Midhun Puthupattu (India) depicts. But where did they get the power to frighten, intimidate and dominate?

There is one thing we have to realize: These monsters cannot survive without us, without our labour that reproduces them. As Karl Marx explained in Capital Vol. 1:

Capital is dead labour, that, vampire-like, only lives by sucking living labour, and lives the more, the more labour it sucks… If labourers consume their disposable time for themselves, they rob the capitalist.

Through unity and struggle, we can, as Naresh Prerna (India) declares, “stop the lust for blood, money, land and everything”. It is possible to take back what is ours. They—the minority—want what we—the majority—have.

Sanctions, blockades and trade wars. For decades, the US state has used the economic arm of hybrid war to force countries and their economies to submit to its hegemony. The US imposes sanctions, blocks the transportation of essential commodities, medicines and aid and freezes bank accounts of other countries.

This cruelty is seen in the simple image of an empty shopping cart in Hybrid War (Economy) by Gabriel Martínez and Sonia Díaz (Spain). Giovanni Montena (Italy), in her work, The Economic War Against Cuba, portrays the 60-year old economic blockade imposed by the US through barbed wire fences around the island—sitting less than 150km off the shores of the world’s great Empire.

Today, China faces an intensification of a hybrid war from the US and Foreign Interference in Hong Kong by Anonymous (Hong Kong, China) shows the way that the US fueled the protests in the former British colony through media disinformation and financial backing. It is such misinformation that we have seen time and time again be used as a pretext for intervention and “regime change”, undermining national sovereignty and popular support.

When we speak about popular resistance, we conjure up images of people in the thousands, or millions, marching all over the planet. They are confronting the powerful and calling for a better, more just, more egalitarian world. We see this in Resistance and Resilience in the Neolliberal State by Samina Sirajuddowla (USA), which reads: “No justice, no peace! All power to the people”.

When we speak of resistance, we think of the brothers and sisters of Cuba and Venezuela, who are beacons of people’s resistance for the world. In Diani Barreto’s (Germany) Cuba: Proudly Resisting Hybrid War Since 1959, she lists the different forms in which these hybrid wars manifest themselves—information warfare, financial asphyxiation, diplomatic isolation, exclusion from the market, trade wars—so that we do not forget them. That the Cuban people have continued to resist the decades-long attacks invites us to continue dreaming, to not relinquish the struggle for sovereignty for peoples all over the world.

When we speak of resistance, we also speak of solidarity, and this means solidarity to end the blockades from Cuba to Venezuela, where we see the daily media attacks, shown so clearly in Zoe PC’s (USA) ¡Váyanse al carajo!. In this work, we see the outline of Hugo Chavez’s figure, with an outstretched arm, inviting us to dream about that 21st century socialism that the Venezuela leader entrusted us.

From Latin America to Africa, where Judy Ann Seidman’s (South Africa) Unite, Organize, Arise to Europe and Robert Streader’s (UK) poster We Shall Not Submit, this exhibition is a display of internationalist people’s resistance. These posters carry forth the dreams, aspirations and struggles of the past to help guide us into the future.

Looking to 2021, we know that it will be a year of continued and intensified struggle; for a vaccine for all, to demand the rights that were stolen from us while we were inside our homes trying to stay alive or on the frontlines to ensure our collective survival, to continue our struggle for basic conditions for a dignified life, and to defend the sovereignty of all peoples and nations. In the face of these multi-headed monsters that at all costs defend the interests of the imperialist neoliberal capitalist order, we have our conviction, our hope and our unity, and with this we will be victorious.

The mental health implications of the COVID pandemic on children