A biography of Indian South Africans

byAshwin DesaiandGoolam Vahed
Share on FacebookShare on Twitter
As both India and South Africa turn away from the inclusive charter of their independence, towards a majoritarian bias accompanied by neoliberal economics and growing inequalities, the unlikely coupling of the two countries that began in the colonial past continues in novel forms.
In their study of the Indian diaspora in recent years, Ashwin Desai and Goolam Vahed reveal communities that, after the long isolation of the apartheid era when India and South Africa had no formal contact, are today rediscovering an India that has altered fundamentally. In place of socialism and solidarity with indigenous Africans, India projects a triumphalist image based on economic success. It is also a sectarian image that drives a wedge between communities of Indian origin.
The following excerpts are drawn from the chapter “Hindus and Muslims: The many threads of change and continuity”. 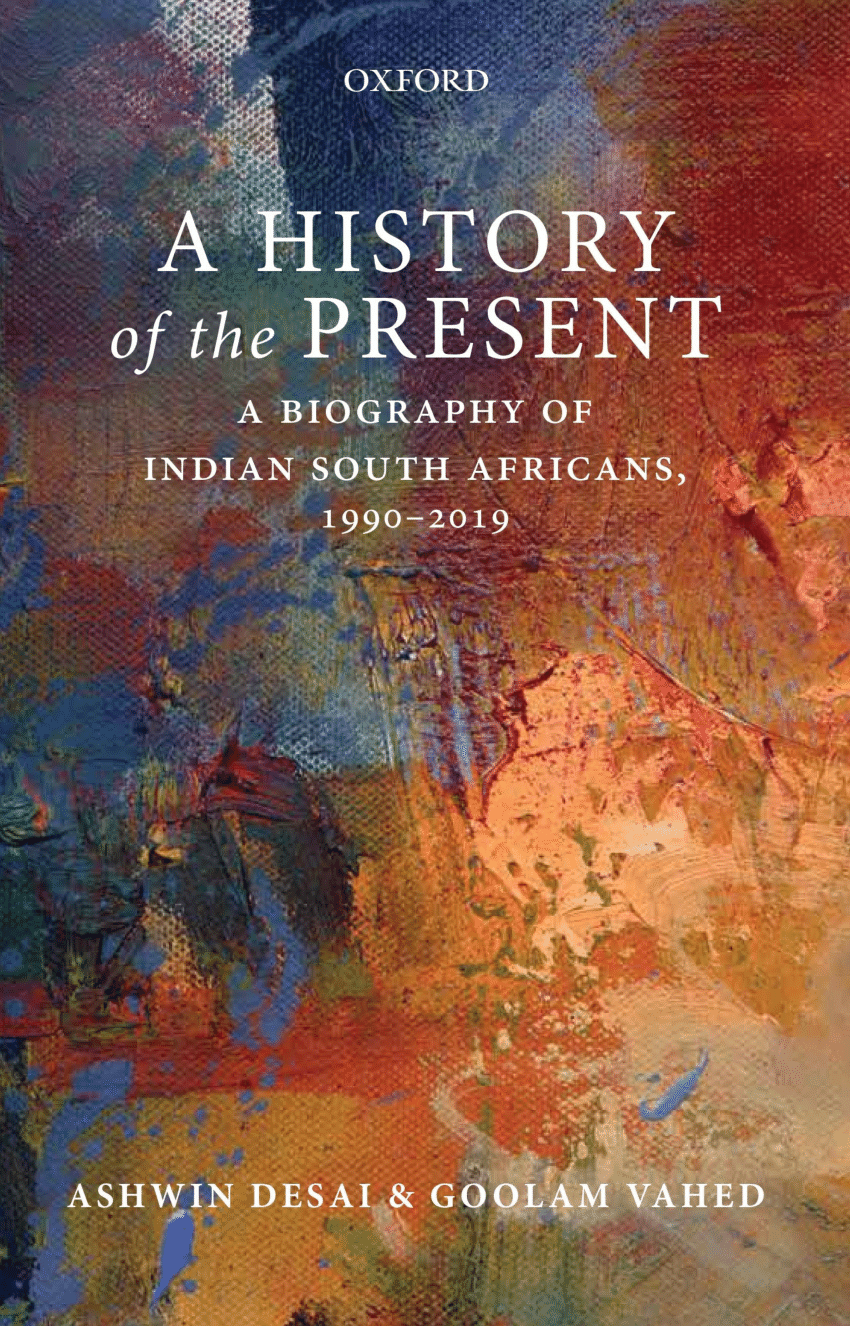 While Muslims regularly visit the holy sites in Saudi Arabia, their beliefs and practices, even those of the reformists, remain largely wedded to South Asia. Many Muslims continue to draw spiritual succour from Deoband and Barelwi, while the neo-Sufi movements that have taken root since the 1990s havea  spiritual lineage that links back to Indian religious luminaries of the 19th and 20th centuries. Muslims of all persuasions continue to visit the spiritual centres in India.

Language provides another illustration of this link to India. The language of the Qur’an is Arabic, yet few ulema  gave support to the Arabic Study Circle’s project in the 1970s of getting Muslims to study Arabic. Their argument was that modern Arabic differs from the Arabic of the Qur’an, and the Muslims who learnt this Arabic would embrace the ‘deviant’ culture of the Middle East. Indian South African ulema have instead argued for the use of Urdu in religious discourses. This was debated in the 1950s when the Orient Islamic School was opened, and the ulema at the time were defeated in their push for Urdu to be the language of religious instruction in the school (Vahed and Waetjen 2015, 246–50). A respected member of the ulema fraternity, Mawlana Abdul Hameed of Gauteng, emphasized the importance of the Urdu language for Indian Muslims in South Africa. Islam came to Indians via India, he said, and

the most important vehicle for us to acquire Deen (faith) is language. A person’s culture is associated and directly related with language. Our culture is our Deen and our Deen is written in the language from which we have our roots in. For us to get the Mizaaj (natural feeling) of our Deen, we will acquire it from our language, and in our case, it is the Urdu language (Is’haaq and Kajee 2013, 15–16).

There are, however, counter tendencies, particularly with regard to younger Muslims, as a result of changes in media and communication. Thus, we find that South Africans are able to exchange ideas with Muslims globally through cyberspace, via electronic bulletin boards and discussion groups. Some register for online courses that originate in places such as New York or Karachi; others attend spiritual retreats held by their shaykhs and Islamic scholars in North America. Many of these scholars have toured South Africa, drawing large audiences to their lectures and workshops. This often does not sit well with the entrenched ulema. For example, when the Pakistani scholar Mawlana Tariq Jameel toured South Africa in July 2018 and called on the Muslims to be united, 17 well established KZN ulema circulated a letter condemning him and asking the Muslim South Africans not to be swayed by outsiders as there could be no unity with those following the ‘wrong’ path.

There are a number of other influences impacting Islam in South Africa and challenging the monopoly of the local ulema. This includes the arrival of migrants from Africa and the Indian subcontinent in the post-apartheid period, as well as the arrival of missionaries and philanthropists from Iran and Turkey. A Turkish organization built the iconic Nizamiye Masjid near Johannesburg. It is modelled after the 16th-century Ottoman Selimiye mosque complex in Edirne, Turkey, and opened its doors in 2012. There is an increased sectarianism as different tendencies mark their territory and seek new adherents. One example is the conflict between Sunnis and Shi’as, which had little resonance with local Muslims in the past. By 2018, there were 16 largely Iranian-funded Shi’a centres across the country, the first of which was only opened in 1998. Over the past few years, Sunni ulema have used Islamic radio channels and mosque podiums to denounce Shi’as as heretics. This partly reflects the tensions in the Middle East between the Sunni Saudi Arabia and the Iranian-led Shi’a factions in places such as Yemen, Lebanon, and Syria. Local Shi’a’ have been subject to threats of violence, which culminated in the attack on 10 May 2018 on the Imam Hussain Mosque in Ottawa, just north of Durban, which resulted in one death, three stabbings, and the mosque being set on fi re. Arrests were made in October 2018 that included Muslims from both local areas and other parts of Africa.

Some concerned Muslims gathered at the Masjidul Quds in Gatesville, Cape Town, on 4 June 2018 to sign the Cape Accord, which aimed to foster unity among Muslims in South Africa. The Cape Accord was condemned by Indian-dominated ulema bodies for being, amongst other things, Shi’a-loving, and within days of signing the accord, a number of bodies were compelled to withdraw from it when their sponsors threatened to pull out funding. The purse strings of the Muslim community continue to be pulled by large Indian Muslim businesses.

A more expansive Hindu consciousness began to emerge in the 1990s in response to the rise of India as a global power and, in particular, what Nanda (2009) refers to as political Hinduism, whereby ‘India with its Hindu civilization is presented as the bright, forward-facing side of globalization. … The idea that Hinduism is “innately” more spiritual, more rational (even innately more computer-savvy!), and more liberal than other religions is quite deeply ingrained in the Indian psyche’. Thapar (1989, 210) states that central to Hindutva is the idea that ‘an identifiable “Hindu” community and structured religion have existed from time immemorial’. Lal (2013) concurs, in arguing that the aim of Hindutva is to ‘forge new forms of Hindu identity, endow Hinduism with a purportedly more coherent and monotheistic form, refashion our understanding of the history of Hinduism’s engagement with practitioners of other faiths in India’.

Hindutva ideology and organizations have been transported to many diaspora communities over the past three decades (Mukta 1995, 15). Hindu organizations such as the Rashtriya Swayam Sevak Sangh (RSS), founded in 1925 and now with a presence in 150 countries, and the Vishwa Hindu Parishad (VHP), founded in 1964, are transnational in their reach and central to spreading the Hindutva ideology. The core belief of the RSS is the idea of a Vedic golden age that was destroyed by Muslim and British colonization, and the aim is to transform India into a Hindu state. The VHP was established to actively propagate this ideology (see Jaffrelot 1999). Internet websites, such as the Global Hindu Electronic Network (GHEN), are crucial in forging a global Hindu consciousness. Vinay Lal (2006, 116) has argued that ‘the internet … is the vehicle for advancing a new conception of Hinduness as a global faith’.

Krish Gokool, a trustee of the Somtseu Road Temple and the 1860 Heritage Centre in Durban, is a founding member of the VHP in South Africa in and disputes that the organization is responsible for fomenting religious tension in South Africa. He wants ‘to see India become a Hindu state’ and to this end, started a chapter of the organization called ‘Friends of the BJP [Bharatiya Janata Party]’. However, he does not want the violent tactics that are sometimes evident in India to be replicated in South Africa. ‘We Indians are a minority here and we need to be careful and prudent in politics’ (Hanson 2005, 161). He describes the VHP as ‘a watchdog for Hindus around the world’. He is in regular communication with the mother-body in India via email, providing reports on South Africa, and has attended a few meetings. One of the ‘shortcomings’, as Gokool sees it, is the absence of a who’s who of Hindus in the diaspora, and this is a project that the organization is working on. Gokool concedes that there is a growing religious intolerance and blames this on the arrival of ‘foreign infl uence and foreigners’, both Islamic and Hindu. On the Hindu side, he blames ‘these so called swamis that were brought in here [in the post apartheid period] and, you know, what worked in a village or in little towns in India does not work in Durban, we have got different dynamics’ (Interview, G. Vahed).

The RSS and the VHP have not been successful in winning over the mass of Hindus in South Africa, even though the World Hindu Conference held in the country in 1995 drew around 30,000 people to a rally at the Chatsworth Stadium, described in a report as ‘the event of the century for Hindus in South Africa and concluded with the slogan “Hindu dharma ki jai! [Hail the Hindu religion]”’(Desai 1995). The limited success of the RSS and the VHP is due in part to the presence of the Maha Sabha, several of whose leaders have a long track record in non sectarian sporting, political, and academic bodies. The Maha Sabha has worked hard to ensure that incidents that create tension between Hindus and Muslims in India are not carried over into South Africa (Maharaj 2013, 97-98).

This is an excerpt from A History of the Present: A Biography of Indian South Africans, written by Ashwin Desai and Goolam Vahed, and published by Oxford University Press India. Republished here with permission from the publisher.
Ashwin Desai holds a doctorate from Michigan University and is professor in the Department of Sociology at the University of Johannesburg. His research interests include sports, political economy, and social policy. His latest work on the close relationship between politics and cricket in South Africa, Reverse Sweep: The Story of Cricket in Post-Apartheid South Africa, was published in 2017.
Goolam Vahed did his undergraduate degree at the University of Durban-Westville and PhD at Indiana University, Bloomington. He teaches in the Department of History at the University of KwaZulu Natal and has written on various aspects of the history of Indians in South Africa and on cricket. His most recent work is Chota Motala: A Biography of Political Activism in the KwaZulu-Natal Midlands (2018).

A Plate of White Marble

Locking Down the Poor: The Pandemic and India’s Moral Centre