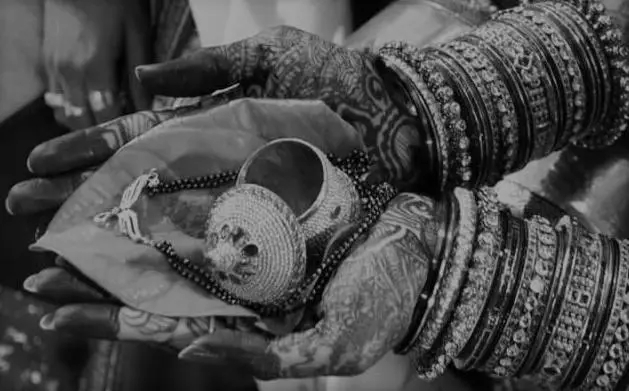 On 10 November, Goa Police registered an FIR against Shilpa Singh, assistant professor at a law school, for allegedly “hurting” sentiments by comparing the mangalsutra that married women wear to a dog’s chain. A member of the Rashtriya Yuva Hindu Vahini felt his religious sentiments were outraged by her remark in a social media post and filed the complaint. The RSS’s student outfit, ABVP, had also complained to her college authorities.

In response, Singh has said that she was always “a curious person” and that even as a child she would wonder why different cultures in India have “exclusive marital status symbols for women and not for men”. Referring to the practice of wearing a mangalsutra and a burkha, she criticised conservative traditions in Hinduism and Islam. This comparison has made organisations like ABVP furious.

What Singh stands for is her opposition to patriarchal symbols and control over women, which have become a part of India’s traditions and are given great importance by all religious groups and imposed on society. Singh’s dissent is to such impositions, and it comes at a time when the politics of religious nationalism is surging all over the world. In India, especially after the construction of a Rama temple in Ayodhya, Uttar Pradesh, is taking place with full state support (following the Supreme Court verdict in the Babri masjid dispute), these norms are being given more and more respectability. With the Hindu-nationalist BJP dominating the political space, conservative norms are being normalised and given social legitimacy.

In the popular imagination, Hindu nationalism is all about marginalising the religious minorities. As such, this is just the most visible part of the agenda of religious nationalism or Hindutva. However, there is more to this form of nationalism, which operates under the garb of religion. The first component of its agenda is to relegate minorities to second-class citizenship and it is the most visible form and effect of Hindutva so far. The second component is the subjugation of Dalits and other marginalised castes by subjugating them in the social sphere, either through social engineering or by co-opting them into the larger project of anti-minority views. The third, and equally important component, is to reduce women to secondary position in society. This third pillar is rarely discussed though it is of paramount importance.

Not only in India, wherever politics comes wrapped in religion, it attempts to strengthen patriarchal values. Recall that women made attempts towards equality even in the time of Savitribai Phule, who launched schools for girls; or in the time of social reformers such as Raja Ram Mohan Roy, who lobbied for the abolition of the practice of sati. Anandi Gopal, Pandita Ramabai, and many other women carved out their own identity, slowly leading by example to show that women are not “property” nor “belong” exclusively to traditions they were born into. These processes were revolutionary in their time though these were only the initial attacks on the edifice of patriarchy. Even in their time, the opposition to them wore the garb of religion and tradition.

When women began joining the freedom movement, the chains of patriarchy started loosening further. Their participation, too, was resented by those who preferred to uphold the barriers of patriarchy and caste hierarchy. Caste and gender subjugation marches hand-in-hand in our society. Muslim communalism came to represented by the Muslim League, which was formed by male Muslim elites and the Hindu Mahasabha shaped by male Hindu elites opposed all social change in favour of women and subaltern classes.

At present, Hindu communalism or Hindu nationalism steered by the Rashtriya Swayamsevak Sangh (RSS), an exclusively male organisation, is at the forefront of validating rigidity over change. The women who wanted to participate in the building of a “Hindu nation” were advised to form the female-only Rashtra Sevika Samiti. Not that the word “swayam”, which means the being or the self, is absent in the name of this organisation. That is not an incidental omissions but a deliberate one, for all patriarchal ideologies regard women as subordinate to men—be it their father, husband and son or other males in general. Apart from this, for women and girls, the RSS has set up the Durga Vahini, which is supposed to train women to exclusively shun modern ideas and practices and join in the Hindutva hatred for minorities.

Take for example the abolishing of sati in 1829. This was considered the first major step in the march of women towards equality and justice. However, even in the 1980s, BJP leaders upheld this practice. In the aftermath of the Roop Kanwar case, the then BJP vice president Vijaya Raje Scindia led a march to Parliament raising the slogan that becoming sati is is “glorious tradition” of Hindus, and a “right” of Hindu women. Similarly Mridula Sinha of the BJP’s Mahila Morcha, justified in an April 1994 interview given to the magazine, Savvy, popular at the time, both wife-beating and dowry. It was a former RSS pracharak, Pramod Muthalik, who organised an attack on young women at a pub in Mangalore in 2009. On a regular basis, the Bajrang Dal ensures that couples are attacked on St Valentine’s Day. “Love Jihad” is yet another attempt to control young women and men. The Uttar Pradesh Chief Minster Yogi Adityanath has openly proclaimed that parents should keep a watch on their daughters’ movements and monitor their mobile phone usage.

One reason why émigré Indian Hindus in the United States fall into the trap of the VHP of America and other overseas RSS affiliates is their sense of shock on witnessing first-hand the relative independence of women in that country. They wish to preserve a strict patriarchal hierarchy even while fulfilling their American dreams.

Not that the RSS is the only one upholding and justifying patriarchy. Overall, Indian society is now in the grip of its retrograde ideology. And so, Prof Singh, who has put forward her understanding about the mangalsutra (or burkha) can be hounded, for many non-RSS people also hold regressive views. To be sure, the RSS and its affiliates, or those inspired by it, are only the most clear-cut expression of such ideas. One needs to recognise that other organisations doing politics under cover of religion are no better at upholding gender justice. The Taliban, the Buddhist and Christian fundamentalist groups in Asia or North America—all sail in the same boat though their limits are defined by how permissive or not their society is of them.

In her classroom lectures, Prof Singh raised issues such as Rohith Vemula’s suicide, lynching in the name of cow protection and the murder of the rationalists Narendra Dabholkar, Govind Pansare, MM Kalburgi and Gauri Lankesh. No wonder the ABVP is up in arms against her.