Of Protestors and Persecutors: The Trial Of The Chicago 7

The Trial Of The Chicago 7, streaming on Netflix, has already generated a lot of interest, both positive and negative. It is the courtroom drama of the year.

More significantly, it is about the enduring power of protest. 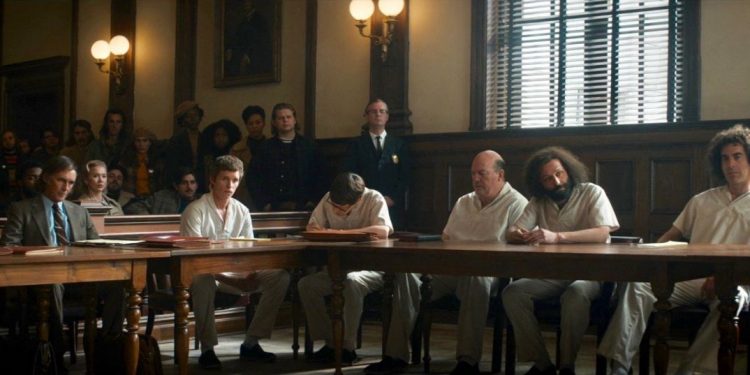 On the ground, activism is rarely romantic. Heroic perhaps, but few are ever immortalised.

Then too, every now and then, real heroes and heroines make the cut on celluloid telling us why their lives or a momentous time in their trajectories must be heard and seen. Aaron Sorkin’s film does that with a superb cast.

This is a doomed trial from the beginning.

The state is out to make an example of the protestors-defendants. This is Nixon’s America and the Vietnam war is unravelling in its brutality and senselessness. Seven driven men, cut across ideological lines, find themselves implicated in the great city of Chicago.

They love their country but they do not wear their patriotism on their sleeves or turn it into a jingoistic fervour pitch, as is the want of the nation-state.

It is these men who show us why their might can never dampen the good fight.
The characterisation of the defendants is not without its problems, given that these men in real life had unique backgrounds and were pursued by different ideologies. We know from the film that they hold distinct views, but Sorkin’s cinematic dramaturgy deals with it only superficially and as a matter of finding the dramatic tension.

Despite not having the same intellectual motivations, the young men are still united by their essential values of humanity and social justice.

They love their country but they do not wear their patriotism on their sleeves or turn it into a jingoistic fervour pitch, as is the want of the nation-state.

As Sacha Baron Cohen who plays Abbie Hoffman, one of the defendants, answers the federal prosecutor (Joseph Gordon-Levitt) towards the end, “I did not know that my thoughts were on trial.” Of course, Mr. Hoffman’s real testimony gives us finer glimpses of his ideas of cultural revolution.

By suitably juxtaposing these flashbacks with crucial dialogues of the narrative as it is unfolding, Sorkin makes a vivid connection between ideology, dissent, and clampdown.

My other favourite actor, Marc Rylance, who plays one of the two lawyers for the seven defendants, once states early in the film, that there is no such thing as a political trial. There is only a civil or criminal trial. Later, he is frustrated enough to admit that with all the mockery underlying this trial, he has come to love the law a little less.

Cinematographically,  director Aaron Sorkin has been able to poignantly and powerfully bring home the riots that lead to the trial. He has been able to strike a sensitive balance between the courtroom proceedings, the out of court meetings, and the flashbacks. By suitably juxtaposing these flashbacks with crucial dialogues of the narrative as it is unfolding, Sorkin makes a vivid connection between ideology, dissent, and clampdown.

One of the more heart-rending moments in the film is when Bobby Seale (Yahya Abdul-Mateen II) one of the co-founders of the Black Panther Party, who is also on trial, but without his lawyer, is bound and gagged and made to sit in open court. The lawyers on both sides succeed in convincing the biased and “unqualified” judge (Frank Langella) to separate his trial from the other defendants and to declare it a mistrial. But by then, the sheer injustice of all that has preceded in Seale’s case is not only staring in the face but also creates a hollowness in the gut.

Like some of the other characters, Seale speaks memorable lines. In the closing scene, it is Tom Hayden (played brilliantly by Eddy Redmayne) who delivers a simple yet extraordinary gesture.

The film never really gives us any remarkable insight into the worldviews of its protagonists.

It reminds us that even democracies are not without their tensions and frictions and the democratic state is not immune to being totalitarian.

Even the Black Panther Party that Bobby Seale belongs to is in the background. What is instead highlighted is the obvious racism, which on reflection is a simplistic derivative of a party that has a rich and important history, and which was in fact inspirational for the Dalit Panthers in India. The inhumanity that Seale is subjected to is appalling but he cannot be appreciated simply as a caricature of black discrimination.

Observers of the film have spoken of its relevance in the Indian context today and have even drawn comparisons. It may be tempting to do so but it would be facile. While the politics of nationalism, state repression, and police excesses are recurring themes, there are always fundamental and systemic differences that belie the more simplistic comparisons.

In spite of its flaws, the film has resonance. It is very involving and its greatest credit perhaps lies in its ability to present a drama of idealism and courage, well-executed and wonderfully performed.

It reminds us that even democracies are not without their tensions and frictions and the democratic state is not immune to being totalitarian. The street must therefore be fought for and who you are will always be of consequence in that irreconcilable difference between the protestors and their persecutors.

First published in The Leaflet on November 9, 2020.
Deepa Punjani is a lawyer and is interested in intersections between law, politics, and culture. Deepa has been engaged with theatre and theatre criticism for several years.