Condemn the arrest of activists demanding justice in Hathras case

Condemn the arrest of journalists and activists under UAPA for demanding justice in the case of the brutal gangrape of a dalit woman in Hathras!
Oppose the impunity provided to dominant caste perpetrators of violence by the Uttar Pradesh government and police! 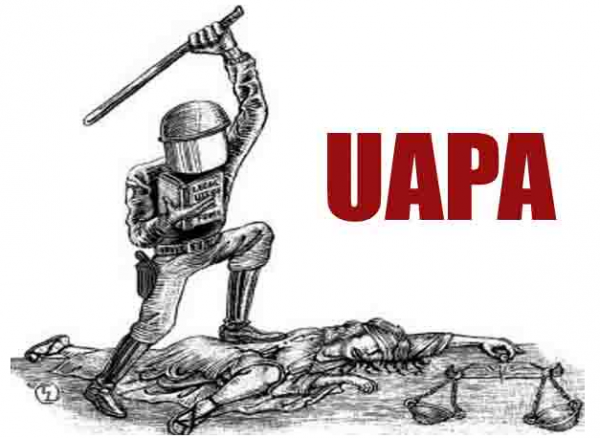 The Campaign Against State Repression (CASR) condemns the arrests of activists Atiq-ur-Rehman, Masood Ahmed and Alam and journalist Siddique Kappan by the Uttar Pradesh police under the draconian Unlawful Activities Prevention Act (UAPA). They were picked up from Mathura on October 7th while on their way to Hathras to meet the family of the deceased dalit woman gangraped by dominant caste men on September 14th. The arrest of Atiq, Masood, Alam and Siddique occurred against the backdrop of UP police filing 19 FIRs, some containing charges of sedition under Section 124A of the Indian Penal Code, against unknown persons for social media posts questioning the state government’s response to the horrific incident of the gangrape of a dalit woman belonging to the landless Valmiki caste in Hathras by dominant landed Thakur men and several more rapes that occurred in the state of UP since.

The open support of the rape accused by officials of the UP government and the ruling Bhartiya Janta Party and the round-the-clock efforts of the UP Police to shield them has drawn severe criticism towards the UP Government. Chief Minister Ajay Mohan Bisht, a Thakur self-styled as Yogi Adityanath, has come under scrutiny. That the cremation of the body of the woman after she succumbed to her injuries was hurriedly done in the dead of night and without her family’s permission indicate that efforts were made to destroy evidence, scuttle the case and protect the perpetrators. The release of contentious reports denying rape based on tests done weeks after the incident despite the woman’s dying declaration revealing both the brutal assault and its perpetrators point to deep-rooted Brahmanical patriarchy that negates the voice of women of oppressed castes and communities in order to protect dominant caste men. The callousness of State forces was further revealed by the ways in which the police dealt with those who dared to condemn its high-handedness. Political leaders, journalists and activists have been targeted, thousands detained and cases filed against hundreds who have protested the treatment meted out to the dalit woman and her family. Denying journalists, sympathisers and others access to family members, forced confinement of the family to their home, surveillance of family members and journalists reporting on the case and threats issued by senior officials to the family all mark the intentions of the authorities. Meanwhile, the police have encouraged the mobilisation of support for the perpetrators by permitting large gatherings of the Savarna Parishad, a conglomeration of dominant caste groups, that has held several meetings in Hathras. Furthermore, the open threats issued by leaders of the Savarna Parishad against those condemning the rape remain uninvestigated. These tactics are similar to those deployed at Kathua and Unnao where the perpetrators, BJP leaders belonging to dominant castes, were protected and even feted.

Day by day the façade of democracy slips ever lower as the crudest and most brutal displays of Brahmanical supremacy of dominant caste groups is flaunted without restraint. In the face of increasing protests, the UP government under CM Bisht has concocted plots claiming an ‘international conspiracy’ to defame the government by the family of the deceased dalit woman and those standing by them. Remarkably, the possession of pamphlets by Muslim activists and journalists asking for ‘Justice for Hathras Victim’ is being bandied as evidence of a “big conspiracy” to foment communal discord. The arrest of Atiq, Masood, Alam and Siddique under the draconian UAPA for conspiracy is reminiscent of tactics deployed in the Bhima Koregaon-Elgaar Parishad case and the North East Delhi pogrom. The targeting of Chandrasekhar Azad ‘Raavan’ by dominant caste groups and charges filed against him for violating COVID-19 protocols by meeting the aggrieved family stand in sharp contrast to the protection provided to BJP ministers hosting gatherings in their homes in support of the perpetrators and their families. Incidentally, the recent arrest of dalit journalist Prashant Kanojia for an alleged social media post shows that anything unpalatable for the CM Bisht can be construed as illegal. While conspiracy theories abound in mainstream media, CM Bisht has systematically targeted those belonging to the most marginalised castes, classes and communities. This is being done to silence those challenging the status of dominant caste groups even as the RSS-BJP project of establishing a Hindu Rashtra is underway.

It is clear that the targeting of Muslim journalists and activists is not enough; the most marginalised must be reminded of the brute force of those in power and the consequences of daring to speak out. All appearances of democracy have been foregone to protect the fragile masculinity of a self-styled yogi and his agents against constructed enemies, be they Muslims, Dalits, workers, peasants, women or ‘foreign agents’, effectively otherising the marginalised communities and serving the project of Hindutva. In light of this, Campaign Against State Repression urges all progressive and democratic sections of our society to unite and condemn these arrests of Atiq, Masood, Alam and Siddique by the UP government, demand the dropping of cases against those protesting the treatment meted out to the family of the deceased dalit woman and action against the perpetrators of the brutal gangrape. Campaign Against State Repression stands by all the voices of democracy opposing Brahmanical Hindutva fascism.