Today is the birthday of Periyar (Erode Venkatappa Ramasamy), one of the world's great thinkers, a socio-political revolutionary and pioneering rationalist who launched the Self-Respect Movement and is known as the 'Father of the Dravidian Movement'. Remembering the great man and a great life with these extracts from his writings on women's rights and feminism. 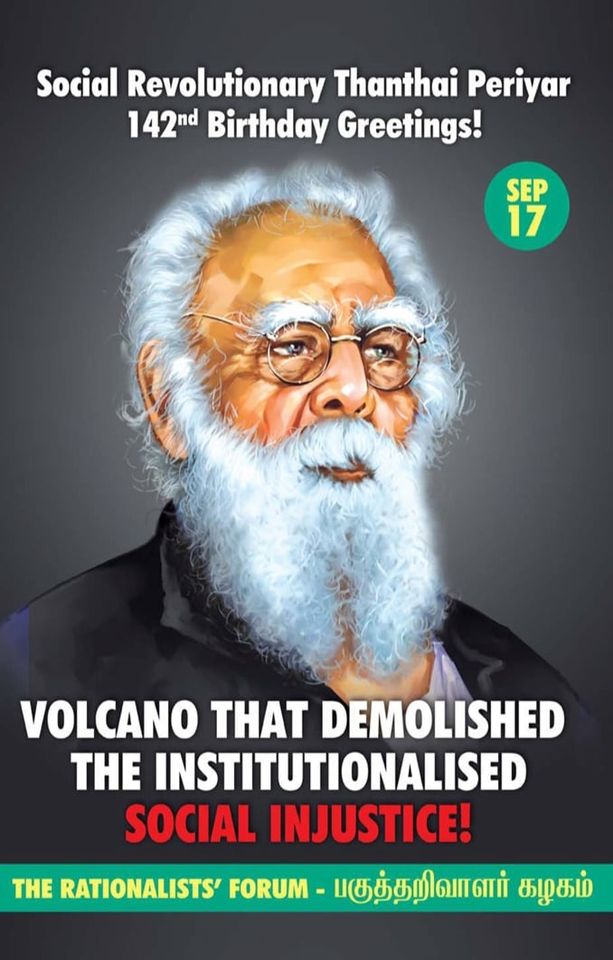 On women's right to divorce:
"if the right to divorce is not granted, polygamy and polyandry should become norms. To bear in silence and patience the travails of an unhappy marriage is a slur on one's humanity, self-respect and an act of clear folly" (Anaimuthu: 148).

On love:
"To discipline love and desire and direct it along particular channels and orient it towards particular persons does not seem to us to have any justification. To desire is human. To control it is to practise a kind of slavery" (Anaimuthu: 153).

Origin of private property, brahminism and subordination of women:
"After it had become the norm for people to want children to safeguard property, brahmins who had invented fictions of heaven and hell to keep the poor from stealing from the wealthy and to secure some of that wealth for themselves now sought to argue that . . . man must have a [male] child who would keep alive his name after death and perform his yearly obsequies" (Volume I 11.10.48; Anaimuthu: 163)

On gender:
"We maintain that while it is the case women possess the attribute of bearing a child in their womb for ten months and eventually giving birth to it, this, in itself, does not make them different from men with respect to [qualities such as] anger, ruling prowess and strength. Likewise we think that though men do not possess the [biological] means to get pregnant, it cannot be said that they possess qualities different from women in respect of love, calm and the power of nurture. If we are to value true equality—if there exists true love between man and woman—it is certain that all responsibilities except that of bearing a child should be considered common to both."

All extracts are from Towards a Non Brahmin Millennium: from Iyothee Thass to Periyar, by V. Geetha and S V Rajadurai. V. Anaimuthu is the compiler of Periyar's Writings and Speeches in 3 Volumes.