I wouldn't have been who I am without Varavara Rao, and it is true for the generation I come from and the one that followed. Today’s Telangana wouldn’t have been what it is without him. I have written and spoken about him and his poetry in the past, but now he is on the deathbed, in a faraway hospital, being subjected to retributive torture by the powers that be. Now, with a never-before urgency, I want to speak and write about him, through an interminable torrent of words. 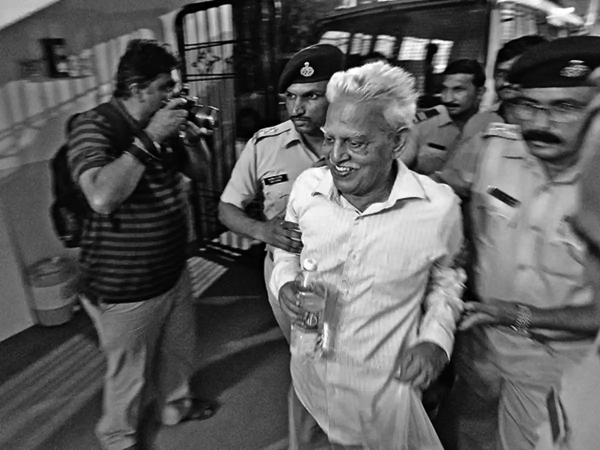 The Indian State, unable to tolerate this captivating personality siding with and representing people's politics, has hounded him through cooked up cases, imprisonment, obstructions to employment, slander, and even murder attempts, from that evening in August 1973 to this day. Owing to the long history of persecution, the nerve cells of VV’s memory have been damaged and his ability to speak debilitated due to solitary imprisonment and inability to engage in creative pursuit.

VV has spent around nine years of his life in solitary confinement. He was incarcerated for the first time in October 1973, following an enthralling literary workshop at Warangal. The latest, before the Bhima Koregaon case, was at Khammam in April 2018. In the meantime, he was picked up by the State at least fifteen times and accused in around 25 cases. Not a single charge was proven to be backed by any evidence. The amount of tales cooked up by the police and prosecution against VV has baffled the courts too. Consequently, around 13 cases were struck down by the courts after tenacious trials going up to 17 years, 3 cases quashed by the same courts even without trials, and the remaining nine ended by the prosecution themselves retracting their charges against VV.

The first time VV was arrested under the Maintenance of Internal Security Act (MISA), the High Court yielded to the arguments made by the defence lawyers that “poets and writers cannot be arrested under this Act”. He was released after five weeks of imprisonment, with the Court’s statement that no one could be charged for their beliefs, except for the involvement in a particular crime. The Andhra Pradesh government and police invented an entirely new meaning for that statement and weaved the narrative that the crimes of the past three-four years in Telangana happened only with the provocation of the land’s revolutionary writers. They started associating particular poems, essays, speeches and gatherings with the crimes that took place sometime later. Even when the trials of these accusations were still underway in local courts, all these cases were soon painted from the angle of criminal conspiracy and sedition and bundled into a hold-all Secunderabad Conspiracy Case. Six writers and forty-six revolutionary activists were accused in this case along with VV. He was arrested in May 1974 and released on bail in April 1975.

In June 1975, he was arrested yet again, because within two months of his release in the other case, came the Emergency. About a lakh intellectuals were imprisoned until the Emergency was lifted in 1977. All of them were released, but Varavara Rao. He was re-arrested in front of the jail and imprisoned for over a week more. A “dreaded Naxalite”, they branded him. 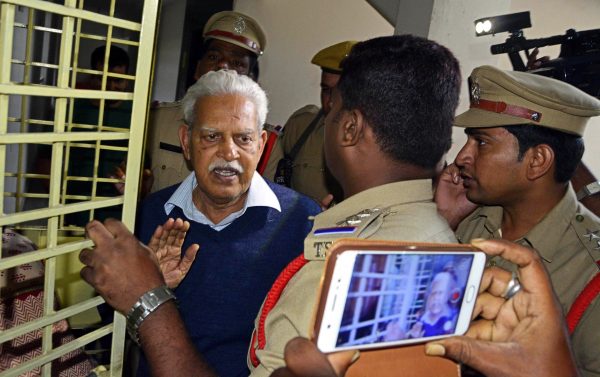 In post-Emergency euphoria, an array of democratic people's movements took shape across the state in the next three years. People's organisations gathered strength and meetings took place everywhere. In one such meeting in 1979, in the coal mining town Mandamarri, to the shock of all those who were listening, a police officer switched the mic off as VV was speaking. Soon after, he rushed onto the stage and proceeded to physically assault VV.

In September 1985, Ramanatham, a popular paediatrician and the Vice President of the Andhra Pradesh Civil Liberties Committee was shot dead by policemen at his clinic on the Warangal highway. The killers came out of a police rally, the participants of which raised threatening slogans to kill VV. Under those circumstances, with a shocking declaration that he was forfeiting his bail for the freedom to live and to write, VV was sent to jail in December 1985, cancelling the bail he got as part of the Secunderabad Conspiracy Case. While the Secunderabad Conspiracy Case was struck down and all the accused were let off as “not guilty” in 1989, VV was implicated in the Ramnagar Conspiracy Case.

Seventeen years after the residences of the People’s War’s topmost leaders were raided in Ramnagar and endless court proceedings following it, the case was dismissed in 2003 as the prosecution failed to prove any of the charges filed against Varavara Rao. The police’s claim to have raided their homes was that they had found key evidence for activists and the leaders of the people’s movement having schemed several conspiracies. For the next 10 years, there was no attempt to charge VV in any case. After the 10 years’ break however, there was again a surge. None of it could be proved against him.

However, VV was made to spend many years imprisoned while the cases were under trial in courts. This naturally affected his health, which deteriorated with the passing years. In the loneliness that accompanied chronic imprisonment, he had to suffer mental stress, lack of proper food and sleep, resulting in the onset of various ailments. The years in prison that affected his health made it unable for him to take part in protests. 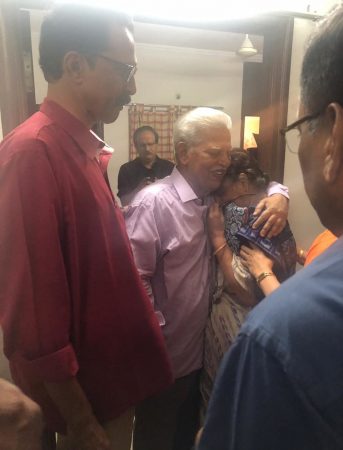 VV with his family at home before he was arrested by the Pune Police, 2018

In August 2018, VV was arrested by the Pune Police following accusations of his alleged role in the Bhima Koregaon violence. The Supreme Court intervened to turn it into house arrest, which continued till November 18 and later, he was arrested again and taken to Pune jail. Despite the assertions that the evidence was fake, he was kept in custody for 16 months at the Yerawada prison and was denied bail. Following the Maharashtra State Assembly elections, the new government made some efforts to look into the authenticity of the charges. Immediately, the Union Home Ministry intervened and transferred the case to its own wing, the National Investigation Agency (NIA). VV was thus shifted to Taloja Jail, Navi Mumbai.

Around the same time, due to the Covid-19 lockdown, prison conditions worsened and for months, he had no contact with the outside world, and this made his health deteriorate further.

Besides all of this, the various instances of murder attempts by state-sponsored vigilante groups and the ruling classes dangled like a sword on his neck, as it happened multiple times between 1979 and 2016.

This is the sixth part of an eight-part series on Varavara Rao by the author.
N Venugopal Rao is a poet, literary critic and journalist.