Speaking Up
Culture of Assertion Versus Culture of Discussion
September 10, 2020 Hiren Gohain 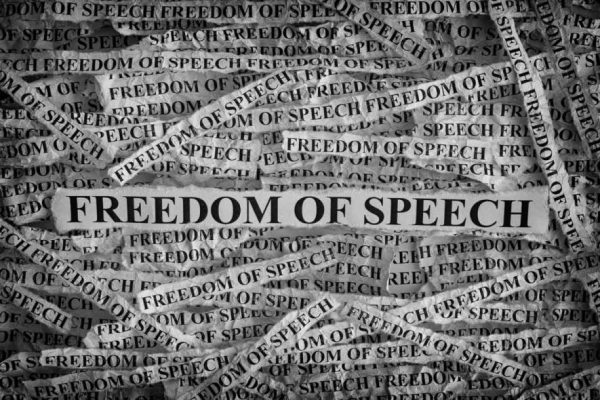 It was recently in the news that the PMO—or whoever—blocked the “like” and “dislike” options on the Prime Minister’s Mann Ki Baat address online when the likes it got were of the order of 84,000 while dislikes numbered more than 5.5 lakhs and kept growing. This in my view typifies an ominous trend in our society, apparent in many spheres. Look at some TV anchors. They would come roaring down on anyone who dared to hold a view different from theirs. One is puzzled by such impatience. Was there to be a discussion? Or what is a “talk show” about?

Universities are now hag-ridden with fear that they may turn into hotbeds of sedition and anti-national plots. And pray, why? Because certain policies adopted by the Centre have been hotly contested or because certain beliefs held by stalwarts in the ruling party are sharply criticised by student groups or some faculty members.

What is the nostrum for curing such ills preferred by powers that be? You just learn to sing in one voice and, preferably, in one tune. Will not that be dull monotony? No matter. You just shout the louder to drown all doubts, whether your own or shared by all.

The craze seems to have spread much farther than we think. What does one think of the reported notice of the Bar Council of India asking the Delhi Bar Council to examine Prashant Bhushan for breach of discipline or violation of the code of conduct of advocates for contempt of court? Barely has Bhushan freed himself from the clutches of the contempt law when the bar council puts him on the dock again. Instead of emulating the grace with which the Supreme Court resolved the issue, probably under the influence of the moral outrage shown by conscious sections including retired judges, it has now resumed the attack on Bhushan’s integrity and standing. If I am not mistaken the bar council has in recent times come out in support of some of the present government’s widely criticised decisions. As far as my understanding goes the Bar Council of India is largely composed of members elected by various bar associations. So it is ultimately the turn of these powerful bar associations to take up the issue. Let us wait and see how they respond.

To return to our main theme, there used to be a culture of discussion even during the rule of the “bad boys”, i.e. the Congress. Paradoxically, it was when they ruled the roost and were allegedly laying the country to waste, that the culture of discussion was thriving. It is of course not at all the case that the government had not then been guilty of gross lapses. But if the leaders of the government sometimes tried to elude the chorus of criticism in questionable ways, they mostly faced and answered the charges as best as they could and seldom used its power to knock critics down with brass knuckles. Even today one can make some sense of the odd spectacle of Rahul Gandhi crying out like a voice in the wilderness against wayward policies of the government. Probably he is playing the role of a responsible Opposition when Parliament is kept in deep sleep, in the forlorn hope that people will appreciate that role.

As against that culture, inseparable from democracy, there has grown up in recent years a culture or rather a cult of assertion, where whatever an individual or party wielding power says has got to be swallowed hook line and sinker. All dissent is not only put under a ban but there is a vast army of trolls to throttle one falling out of line waiting in the wings to jump into action and often holding out threats of physical violence and murder. Policies turning time-honoured ones on their heads are blithely proclaimed as gospel. Criticism is regarded as inexpiable sin and the wonder is how such a climate could have descended into an environment that had been so vibrant not so long ago with cogent and eloquent criticism and dissent. Sometimes one feels as if one has wandered into a country where the grotesque is the rule and decency and truth are outlaws.

This has happened to us allegedly with the consent and support of the people at large. The apostles and law-givers of this “culture of assertion” set a great deal of store by such support and campaign feverishly to win majorities in parliaments as an unfailing mark of such popular support. Though once such a majority is engineered the voice of the people is counted as noise in communication, which becomes a one-way street. Examples cited above may serve as instances.

This culture of discussion is the product as well as the distinctive sign of freedom of speech, which is a core practice and value of democratic societies. It is surprising that a noted writer has recently termed it as “primitive” in the sense of its being elementary. That is an optical illusion as one does not realise its precariousness and fragility in a country where it has by and large been in practice. In fact over centuries of history in most countries of the world it has been the exception rather than the rule. In the United States for example, in the early fifties, it was seriously threatened and the freedom in practice is still somewhat cramped. It is a freedom earned with grim struggle by democratic forces against ruling powers that have generally done their worst to crush. And make no mistake, these forces have included poor working people whom the ruling classes have scorned as rude barbarians. And it has by this time become the touchstone for the common people to test whether the state is working for their benefit and advancement. On the other hand the first thing that despotism does is to stint and curtail it by stages and finally abolish it altogether.

Hence the first sign of the threat of despotism in any society is the rise of intolerance and distrust of dissent and discussion. A climate of blind belief usually associated with an infallible source of authority descends on such society and a splintering of democratic forces in their mutual distrust weakens resistance to an evil of which all of them are aware.

First published in Newsclick.
The author is a socio-political commentator and cultural critic. The views are personal.