“In the powerful idiom of postcolonial criticality, the question we should ask is not ‘Can Kashmiri women speak?’ but rather, ‘Can you hear them?’”, Nitasha Kaul and Athar Zia, editors of the book, Can You Hear Kashmiri Women Speak?: Narratives of Resistance and Resilience, succinctly put.

Published by Women Unlimited, this first-of-its-kind anthology initiates the reader into a complex understanding of Kashmiri women’s life-worlds in the context of protracted civil conflict and military occupation. The women here speak and write about the aftermath of the shocking abrogation of Article 370 in August 2019; of spectacles and street protests in the Valley; of women’s companionship and female alliances; and of the literature of resistance.

The following are excerpts from the Preface and Deepti Misri’s essay of the book. 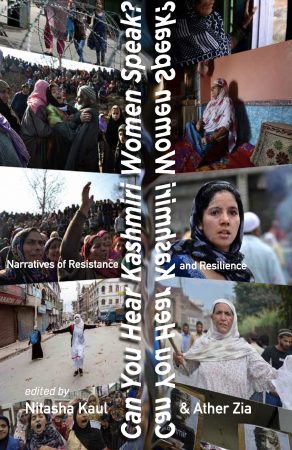 We reflect on some of the issues of grouping the themes, and the challenges we faced in putting together this work. As co-editors, as Kashmiris ourselves, our motive has been to include the ‘herstories’ of Kashmir…

Deepti Misri, in her essay, engages with a critical juxtaposition of two digital feminist interventions protesting sexual violence against women and girls in Kashmir. One case relates to the brutal gang-rape and murder of Asifa Bano, an eight-year-old Bakerwal girl in Kathua district in 2017, and the intervention in the case of the 2018 collective statement entitled ‘Decolonial Feminist Statement (DFS) on #MeToo in Kashmir’.

Reading the #JusticeForAsifa hashtag campaign alongside the ‘Decolonial Feminist Statement’ (DFS) first posted on the Critical Kashmir Studies weblog, I consider the limitations of the activist celebrity campaign, presumably in solidarity with Asifa, while highlighting the opening created by the DFS for Indian feminists to be in effective rather than nominal feminist solidarity with women and girls in Kashmir. Such a feminist solidarity, as the DFS had suggested, must necessarily be approached as transnational in nature, rather than forged within national boundaries.

…even as the campaign embodied a critique of Hindu nationalism, it remained anchored to the idea of a better Indian nation capable of providing adequate protection to the Kashmiri and Muslim child, a gesture anathema to Kashmiri feminists who had been working towards decolonisation rather than mere inclusion in the Indian nation-state. The hashtag #JusticeForOurChild smoothly subsumed Asifa into Indian nationhood, claiming her as the child of conscientious Indian citizens. Like #BringBackOurGirls, the viral hashtag adopted globally to highlight the kidnapping of the Chibok schoolgirls by Boko Haram in Nigeria, #JusticeforOurChild relied on the appropriative pronoun ‘our’, effectively erasing the specific historical and political context of occupation in which the rape had taken place. As such, it became a gesture that lent itself to an ongoing settler colonial project in Kashmir, a process which was consolidated by the removal of Articles 370 and 35A on 5 August 2019.3

…Only a few months after #JusticeforAsifa had been trending, the #MeToo wave came to Kashmir, implicating a number of Kashmiri Muslim male journalists, and from there, writers, artists, and activists. In October 2018, the Critical Kashmir Studies blog posted a statement entitled ‘Decolonial Feminist Statement on #MeToo in Kashmir’. Initiated and drafted by a wide transnational network of Kashmiri feminists working across Kashmir, the US, and other global locations, the statement was eventually co-signed by a large cross-section of Kashmiri and non-Kashmiri (including Indian) feminists and allies…

These are excerpts from Can You Hear Kashmiri Women Speak?: Narratives of Resistance and Resilience edited by Nitasha Kaul and Ather Zia and published by Women Unlimited. Republished here with permission from the publisher.
Deepti Misri is Associate Professor of Women and Gender Studies at the University of Colorado, Boulder. She is also a founding member of the Critical Kashmir Studies Collective.Nitasha Kaul is an academic, novelist, and poet, and is currently Associate Professor, Politics and International Relations, at the Centre for the Study of Democracy, University of Westminster, London.Ather Zia is a political anthropologist, poet, columnist, and short fiction writer. She teaches at the University of Northern Colorado, Greeley, and is also the founder-editor of Kashmir Lit and co-founder of the Critical Kashmir Studies Collective.