This post is an extract from the Report titled Academic Freedom in India: A Status Report, 2020. The authors, Nandini Sundar and Gowhar Fazili, document the shrinking space for academic freedom in higher education in India. It was written in June 2020 as a status report in response to a call for submissions on academic freedom by the UN Special Rapporteur on the protection and promotion of the right to freedom of opinion and expression.  Academic freedom has been defined “as the right to do research, teach and study, and express oneself on different platforms, in keeping with academic conventions which are laid down by peers in the field and not on extraneous non-academic grounds.”

The report highlights the violations of various aspects of academic freedom such as restrictions on intra-mural freedom to teach, study and have an opinion, restrictions on extra-mural freedom to acquire and express opinions, and freedom of academic exchange and dissemination. It states since 2014 India “has seen an unprecedented assault on academic freedom as well as on academics.”

A section of the report exclusively deals with the academic freedom in Kashmir and documents the physical vulnerabilities faced by Kashmiri students in and outside Kashmir, the impact of communication blockade in Kashmir since August 2019, and the lack of intellectual freedom to discuss Kashmir.

This extract focuses on restrictions on intra-mural freedom to teach, study and have an opinion. Full report is available here. 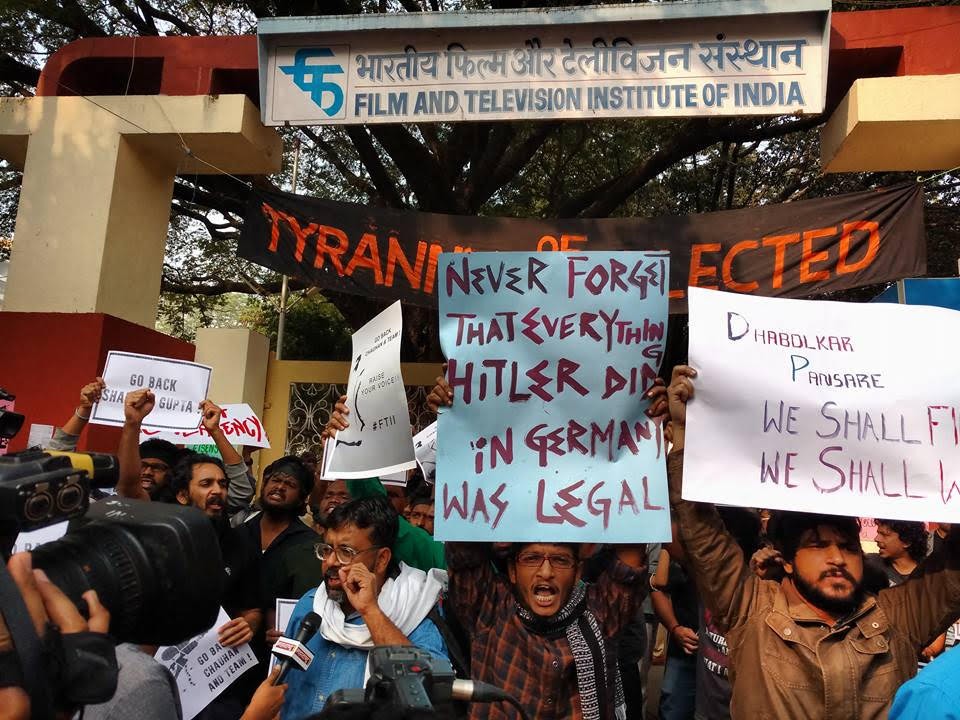 V.  RESTRICTIONS ON INTRA-MURAL FREEDOM TO TEACH, STUDY AND HAVE AN OPINION

The most common threat to academic freedom is interference by governments in what should be taught or the restriction by non-academics and those outside a given discipline on what is taught inside the classroom. Inevitably in countries where state funding is important, ‘national priorities’ as defined by the ruling party act as extraneous influences. In the pre-independence period in India, the major external influence on academic space was the freedom movement, with many students feeling that they should boycott classes. In the immediate post-colonial period, the emphasis was on nation building, including setting up scientific technical institutions. Most of the practices and conventions relating to academic freedom date to this period. Since 2014, whatever the BJP’s official position as government, the underlying force appears to be the RSS  vision in which the stated aim of education is to consolidate a Hindu nation, and promote education based on ‘Hindu values’.

Since 2014, this vision has taken the form of attempts to introduce subjects with a distinctly ‘Hindu’ focus or divert research funds to particular themes upholding the RSS’s pet concerns such as cow protection. For example, in 2020, an inter-Ministerial funding program “Scientific Utilization through Research Augmentation Prime Products from Indigenous Cows” (SUTRA-PIC India) has been planned with the support of Ministry of Science & Technology through Department of Science and Technology (DST), Department of Biotechnology (DBT), Department of Scientific and Industrial Research (DSIR)- Council of Scientific & Industrial Research (CSIR); Ministry of Ayurveda, Yoga, and Naturopathy, Unani, Siddha & Homoeopathy (Ayush); Ministry of New and Renewable Energy (MNRE), Indian Council of Agricultural Research (ICAR), and Indian Council of Medical Research (ICMR).” In 2015, the Indian Science Congress allowed a symposium on Ancient Sciences through Sanskrit, at which untenable claims were made  ancient Indian flying machines, among others.

In 2017, in action that is quite unprecedented in the scientific community, some 12,000 scientists marched across India in protest against funding cuts and an end to the “propagation of unscientific, obscurantist ideas and religious intolerance’ ‘patronised by persons in high positions’, noting that “untested and unscientific ideas are being introduced into the school textbooks and curricula.’”

When not promoting ancient Indian culture, the government believes in deploying universities to praise its ‘governance model’. For instance, in BJP ruled Gujarat, the Government issued a list of 82 topics suitable for PhD theses, pertaining to the (successful) execution of state and central government schemes, while in BJP ruled Uttar Pradesh, Lucknow University set exam questions on Modi’s schemes.

Apart from promoting their own vision, the RSS,through its teacher fronts, has objected to certain books on university syllabi. This is not the first time this has happened, and even under previous governments, there were objections to books that one party or the other found ‘politically dangerous’ such as Rohinton Mistry’s novel, Such a Long Journey which was dropped from the Mumbai University syllabus. However, the scale of objections has increased with the coming in of the BJP government. (See Annexure 1 on Censorship of books/Interference with university syllabi).

Increasingly, with a politicised and partisan student body, teachers have started noting the surveillance of lectures. Online lectures only increase this possibility.

The RSS vision of what education should be for is, however, contested by faculty and students within universities, which then leads to a second order, physical and legal, assault on academic freedom.

Nandini Sundar teaches at Delhi University, Gowhar Fazili teaches at Ambedkar University. The section on Kashmir was written by Gowhar and the remaining sections by Nandini. Sumit Kumar and Rajat Sonkar created the tables in the annexures.