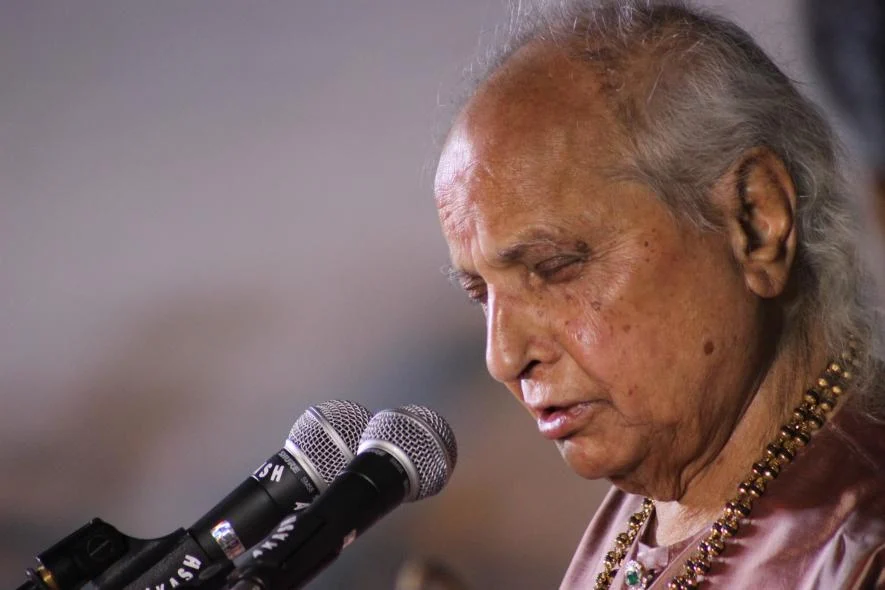 Pandit Jasraj grew up in a world where music developed due to the complex interaction between various peoples of diverse races and cultures over several thousands of years. He has successfully carried forward the legacy of the Mewat Gharana for more than 80 years.

As he passed away at the age of 90 on Monday, the aspirations of Pandit Jasraj to find an unknown grave nested in Bhopal, seems to have not weakened till his last moments. It’s the grave of none other than the co-founder of Mewat Gharana– Ustad Ghagge Nazir Khan, who died in the 1920s in Bhopal.

Ghagge Nazir Khan was a vocalist of the Mewat Gharana, that includes some parts of Rajasthan and Haryana. The other founder of the gharana was his elder brother Ustad Wahid Khan, who was a Rudra Veena player.

The son-in-law and the grand son-in-law were very good friends and spent a lot of time together. Ustad Bande Ali Khan was also Ustad Wahid Khan’s teacher. Bande Ali khan received his Been (Rudra Veena) training from Ustad Behram Khansaheb Dagar. Thus, we see a very definite Dagar-bani influence on the Jod part of the Mewati instrumental presentation. The Dagar influence was also evident in Nazir Khan’s singing because of the strong family connections with Hassu – Haddu Khan.

What is more true, perhaps, is that this rare composition allowed the birth of Mewati Gharana which enjoys both vocal and instrumental traditions.

Nazir Khan, who came from Jodhpur, joined the Bhopal royal family as a court musician. Since he had no children, he adopted his younger brother Munavvar Khan whom he trained in the vocal. Munavvar Khan, too, did not have any children and adopted his elder brother Wahid Khan’s son Ghulam Qadir Khan carried forward the vocal traditions of Mewati Gharana. Nazir Khan had two other disciples – Pandit Nathulal and Pandit Chimanlal. Pandit Nathulal trained his nephew Pandit Motiram, who was appointed as musician in the Kashmir court and later in the Hyderabad court. And it is from them that the lineage of Pandit Jasraj’s Mewati connection follows. Nathulal trained his nephew Pandit Motiram and his son Jasraj. Born in 1930 in British India, Jasraj was also trained by his uncle Pandit Maniram after the early demise of his father.

Making his debut as a tabla artist at the age of eight in 1937, Jasraj, whose first public singing concert was held in 1952, was eager to know the place of the tomb of Ustad Ghagge Nazir Khan.

It was an extraordinary situation for Pandit Jasraj, as he sat in front of the nearly 2000-strong audience who had come to witness the prestigious Sangeet Kala Ratna award ceremony held in the state capital in 1976. He received the award and was invited to deliver a speech in front of the audience comprising of government officials, art lovers, art critiques, including prominent Indian classical personalities like  the late Ustad Latif Khan.

The maestro opened up before the audience about his love for gayaki (singing), his journey, the changes in music and the importance of the Guru Shisya Parampara. As the audience concentrated on his words to understand the losing influence of Indian classical music from the country’s terrain, a question from Jasraj to the audience, about the grave of the founder of Mewat Gharana- Ustad Ghagge Nazir Khan, who died in the 1920s in Bhopal, left everyone in daze.

Jasraj’s question was not rhetorical, but required a well-considered answer.

And when the legendary Hindustani classical vocalist Pandit Jasraj, who has a minor planet named after him, was unable to get any response from the audience, he did not pursue the matter then, burying his interest and refusing to put forward his opinion. The audience’s lack of knowledge about the grave was nothing new. Independent India’s history has been filled with numerous instances of government apathy and neglect towards several legends and art forms that have survived for centuries in Indian soil.

For its part, the authorities have always argued that their policies are people-friendly and recognises every section of the society. This, however, is more illusory than real. It is hardly surprising in these circumstances that even the grand powerful administration lobby who was part of the audience proved to be a damp squib in response to Jasraj’s question.

The musical doyen very well understood that even his justifiable demand may not strike a chord with the government machinery, who are known for their inabilities and incompetence, and move them to trace unknown grave of the founder of Mewat Gharana located in Bhopal.

In his later visits to the city of lakes, Jasraj never enquired about the grave, probably not wanting to  bother others, and mostly spent his time with his friends, especially at the home of one of Bhopal’s most eminent families– Rajendra and Asha Kothari.

Today, when one recollects Panditji’s face, one cannot but forget his unparalleled classical notes mesmerising the audience at the open theatre of the Museum of Mankind (Indira Gandhi Rahstriya Manav Sanghralaya) overlooking the Bada Talaab (Upper lake). It was striking  how his eyes went over the skies before his voice serenaded the audience.

Jasraj Ji, whose voice attained a devotional touch even when he was not singing a bhajan firmly believed that his vocation as a singer was a direct communion with god. Popular for his clarity of diction, he had mastered four-and-a-half octaves in his vocal pitch and always took keen interest in researching and popularising old forms such as the sangeet style, in which performances are held in temples.

First published in Newsclick.
The author is a freelance journalist based in Madhya Pradesh.
Disclaimer: The views expressed in this article are the writer's own, and do not necessarily represent the views of the Indian Writers' Forum.