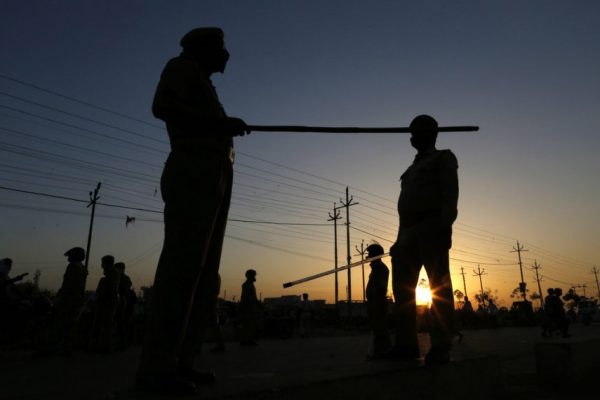 On the stifling of democratic freedoms in the context of the outbreak of COVID-19 in India and elsewhere, a webinar was jointly organised on August 10 by New Delhi-based organisations The Centre for Equity Studies (CES), Rosa Luxemberg-Stiftung and Newsclick. As part of a series of online discussions on "Pandemic and Equity", the webinar had academicians and activists Satish Deshpande, Zoya Hasan, Nandini Sundar, Kiruba Munusamy and Gautam Bhatia as panelists. Along with Harsh Mander of CES, they spoke at length about the wide ranging aspects of the matter. Sandwiched between two arresting documentaries by Karwan-e-Mohabbat, the axes around which the discussion unfolded were the major threats to democracy, the pandemic and on finding ways to resist.

Conducted just five days after the "Bhoomi Pujan" ceremony at the newly built Ayodhya temple, the webinar was introduced as "timely" since the republic was going through "one of the darkest moments in its journey". At least 3 of the 5 speakers, including Munusamy and Sundar, felt that the country was in an emergency. Resistance, for them, had to come from below with an active participation of the civil society working with political formations, and shifting our vision of protests from a romanticised affair to something that needs to happen everyday. There is an urgent need, the speakers felt, for activists to have door-to-door campaigns across the country on a war footing, both to spread awareness about the state we’re living in and to organise against it. 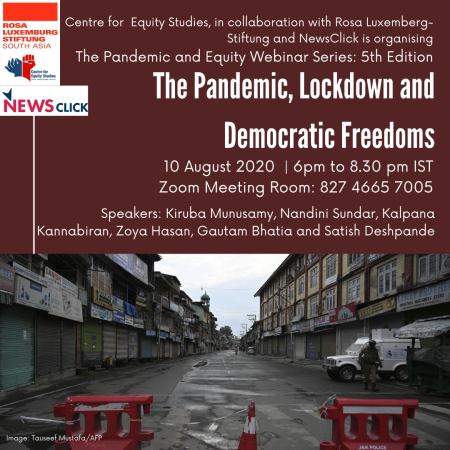 The discussion began with the screening of a documentary about a Delhi-based doctor, MA Anwer, who works at the capital’s Al Hind Hospital. Amid the violence that broke out in North East Delhi a couple of months back, Anwer was instrumental in bringing hundreds of the severely injured to Al Hind, which then turned out to be the first place of refuge for most of them. However, in a drastic turn of events, it was Anwer who got an FIR filed against him by the Delhi Police, for murder charges.

Following this, Harsh Mander, activist and director of CES, spoke about how there was an "enveloping darkness", since freedom was never as "threatened in the country as it is now". Speaking about the anti-CAA movement, he said that the significance of the slogan of "Azadi" which reverberated across the country as part of it, was therefore immense in such a context. He then went on to talk about how the protests were suppressed both by violence and the government’s imposition of the nation-wide lockdown and added that immediately after the imposition, the government was "prompt" enough to "whitewash" the graffiti at Jamia Millia Islamia. This was followed by the numerous arrests at a time when it was difficult for people to receive legal aid. The period after the declaration of the lockdown also saw a communalisation of the pandemic itself, along with sudden and mindless policy decisions like night-curfews in New Delhi, said Mander.

For sociologist Satish Deshpande, the gravest of threats to democracy in India today was in fact the "freedom" felt by a large section to express whatever they wanted to; they were now free from a "false set of morals or values” that held them back all these years and could now be what they truly are. According to political scientist Zoya Hasan, the "collapse of countervailing institutions" and the consequent "concentration of power in a single person"; the “declining role of courts in upholding people’s rights"; and thirdly, how mainstream national media had become the "watchdog of the opposition", when they are to question the government — were the most dangerous threats. Lawyer and dalit rights activist Kiruba Munusamy questioned why the government had the freedom to take crucial policy decisions like those regarding the NEP, EIA, labour laws, at a time when the rest of the country was locked down.

Sociologist Nandini Sundar said that although large sections of India had always been under an emergency-like situation, that its middle classes were now feeling "unprotected" was a confirmation that it is now a nationwide phenomenon. She added that this was simply a "continuation of upper caste Hindu dominance" which was characteristic of the Indian society even though it was "briefly kept in check by Nehruvian socialism". 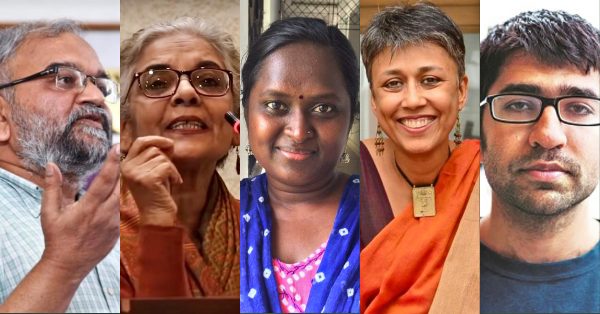 Taking off from Sundar’s point, lawyer Gautam Bhatia, who joined in from the UK, was also of the opinion that decolonisation, even in terms of civil rights, hadn’t reached major parts of the country yet; the current situation therefore was an erosion of whatever gains were made. Bhatia quoted Karl Marx to say that every constitution contains its own negation and argued that the Indian Constitution too projects a "patchy story of decolonisation" with wide ranging restrictions to fundamental rights within itself. What the country is going through at the moment, therefore, is due to a dominance of the constitution’s own "repressive impulses". Drawn from the "regressive terrain of the constitution" these need to be pushed back to bring about or rescue "emancipatory constitutionalism", as per the lawyer.

Bhatia was of the opinion that India’s response to COVID-19 was marked by "rule by decree" and "a top-down approach," whereby the judiciary and legislative was not consulted by the executive in taking decisions. He cited the imposition of the Disaster Management Act and night curfews as "classic cases of overreach" and said that the court’s indifference to such hasty decisions was keeping the executive’s actions unrestrained. Sundar added that both faith and fear were being used by the state to respond to the outbreak.

Hasan said that the virus broke out when "democracy was already under assault around the world," thereby "helping authoritarian governments to craft their policies with more justification” and also enhancing the "skewed power relations between the executive and judiciary". While the numbers of infected and dead continue to rise, the political costs of the lockdown have been high, said Hasan. Arguing that the clampdown on democratic freedoms was of three kinds, she said that state-led subversion of civil liberties, exposure of the vulnerable to economic hardship, and the undermining of institutions like the media, were the ways in which this was carried out. "The lockdown has exacerbated all discrimination and inequalities in terms of gender, caste, class", she added.

Deshpande came in to argue that there was a need to separate the pandemic from larger issues of democracy in the country since the former demanded some amount of authority.

The panel also had several varying points to offer about the ways in which one could fight the assaults. While Sundar felt that it was necessary to strengthen the Left and Mander thought that there was a need to look towards the Left with hope despite its shortcomings, Hasan was of the opinion that the Opposition on the whole had to come together. Munusamy said that the oppressed, especially the dalits, had to voice their own concerns and be their own representatives, while adding that there still was a need to support the Left and the Opposition. Bhatia put across his thoughts on how the constitution can be utilised and said that there was a need to find new ways to imagine its emancipatory potential — while taking the example of the anti CAA protests which had exalted the Preamble. Almost all of them agreed that the civil society had to step up, work with political formations, engage in house-to-house campaigns and "operate at the level of the everyday". By breaking away from romanticising protests, Deshpande said, there’s a need to think of it as something long drawn out and necessary. Most of them also agreed that political formations had to come together and solidify as an opposition.

The discussion ended with the screening of another documentary — this time on the life of Karim Ali, who was declared a foreigner and arrested in 2015. Forced to languish in a detention camp in Goalpara for 5 years, he says on camera that he’s "barely alive".