Speaking Up
Tongues are on Trial
Why the attack on poets and activists is special
August 17, 2020 Brahma Prakash 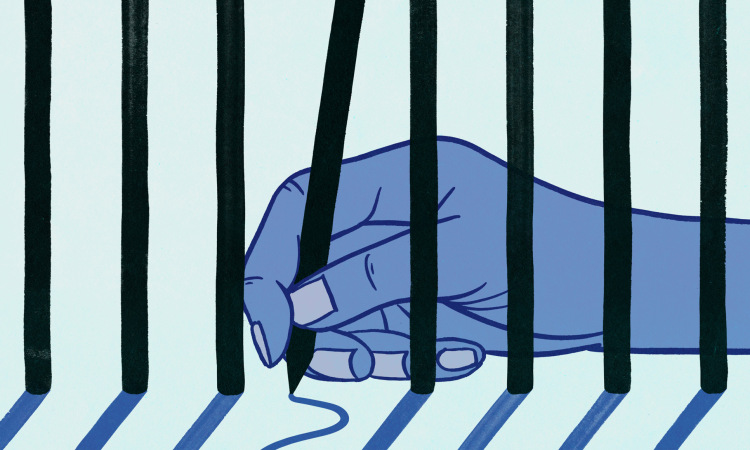 Under the current circumstances, amidst a pandemic, what we are facing is the urgency of life — a deep existential crisis. Viruses and corpses are no longer metaphors. They are footing in front of us. Bereft of a physical form, the virus is real.  Bereft of bodies and ceremony, the silent corpse is real. Amidst the roaring sound of the Rafale jet, the howling cry of a patient is real. The number of deaths and positive cases, though manipulated, are real.

If we are part of any civic political system, these numbers indicate a genocide. Who has committed it? Covid or the health system? One is left to decide. But it is a time of human crisis;  of compassion; of bare life. It is a time of bare poetry. In such a situation, keeping the elderly and ailing in prisons without trials is not only apathetic but also inhuman. What sadistic pleasure can the “Ministry of Happiness” get in denying bail to the 81 years old poet, Varavara Rao?  What purpose does it serve to keep a 90 per cent disabled professor, GN Saibaba in jail? What will the nation achieve in putting the ailing professors Anand Teltumbde and Shoma Sen, and lawyer Sudha Bhardawaj, behind bars? Why the rush in arresting Hany Babu? Was he planting bombs or overthrowing a government?

They have not yet been trialled. We are not sure of their crimes, but the criminal negligence of the state is visible.  For the state, Covid is about the containment of dissent. Of course, it is about the helplessness of the broken system but it is also about the apathetic nakedness of the system in front of us. While the incarceration of Rao directly implicates his poetry, the incarceration of others is also a question of poetry as long as they are in prison for their words, tongues and dissenting voices.

Words are on trial. Tongues are on trial.  It is a time of naked poetry.  At this moment, one could at least say like the naked poet (Digambara) did: I know who the Murderers are/ As a poet, as a pretender/ I blame Time/ for the time being. One could have claimed that What lasts in all languages/ as the ultimate sound/ isn’t OM/ but the cry for help. Perhaps a more soothing one: I will keep searching/ for the ear/ that can hear the truth. It is the urgency of life, the search for truth, it is the question of poetry that brought them in jail.

An octogenarian poet plotting to kill a Prime Minister is too good to be true. One would love to believe this conspiracy as a Shakespearean prophecy. But it neither has the potency of that language, nor the depth of a prophecy.  The allegation against the poet is not only bad humour but also a bad horror. One does not know whether to feel sad for the allegations or for the depravity of the imagination that cooks such bad stories. From the charges on Anti-CAA protestors to the charges in the Bhima Koregaon case, the imaginative depravity of police and intelligence agencies has rarely been in such an excess.

The case against Rao and others is not only a case of a poor conspiracy plot but also a case of poor prophecy in the language of poetry.  A poet could have foresighted, “O Dear Leader! You will also fall like all the Great Dictators.” Or else, like the three witches in Shakespeare’s Macbeth, the poet could have predicted, “where shall we three meet again/ In thunder, lighting or in rain?” That would have been more conspiratorial. Prophecy is the higher language of conspiracy. Both have two modes of temporality.  Conspiracy leaps in the historical time; prophecy sleeps in a dream only to rise again like the oracle’s prediction that Oedipus will kill his father and marry his mother. The State should have charged Varavara Rao for the prophecy that he necessarily commits as a poet. But then it would have been difficult to charge him, as prophecies carry, what Albert Camus says, “the impossibility of proof.” In other words, the authority can charge the poet for only one reason, for the impossibility of proof — for leaving no traces of the crime, for producing surplus meanings, for telling so many stories, for asking  unanswerable questions.   Like children, poets have inexhaustible questions to ask and stories to tell. Rao writes, “What needs to be said, always remains unsaid.”

Also read | When Words are Prey: What Demagogues do with Words

So why are the attacks on the poets, writers and activists special? They are special because the reason(s) behind these arrests are special. The ways in which the state perceives them as a threat is special. The State’s harassment of them is special.

The figure of the poet is an ideal of freedom, a bundle of imagination.  The poet is a creator as well as a portal — a transporter of memory.  Like the hunters’ instint for survival drives them to hunt, revolutionary poets strive to take down the State by their haunting words.  Remember the song of balladeer Gaddar, “Ye aag hai, ye aag hai, ye bhukhe pet kee aag hai” (It’s fire/ it’s fire/ it’s fire of the hungry belly). If a fire breaks out into a grain storage, his song would be called seditious. The attack on the poets and artists is an attack on indispensable human capacities. It is an assault on the bodies of sensibilities;  on the fundamental idea of freedom;  on rhythm and words. The attack on the poet is an act of invasion. It is an attack on the chord that echoes the naad. The figure of the poet represents the urgency of life. The attack on the poet is the very reversal of that urge. Poets are capable of creating new life and giving life to death as the world witnessed in the case of George Floyd. In the urgency fo life, such poets and activists always live in the moment of  “I can’t breathe”. With no time to wait for their release, they turn the four walls of a prison into the heartland of resistance. Varavara Rao once wrote from the jail:

The moon gets caught in the barbed wire
Over the prison walls
And we, after singing and discoursing,
Lose ourselves in the dreams of revolution

The four walls of the houses where women are imprisoned, the prison where rebels are imprisoned and the boundaries where refugees are imprisoned, become the most beautiful poems. The poetry of the walls are full of inscriptions but are we capable of reading them? How does one read or write a poem when those in power try to sacrifice the words for its sin? In the silence of the sound, VV writes, “when a weary cloud chokes the voice of justice/ no blood flows/ no tears rain.” How then, will the poet will write poetry?  The poetry in prison is like a canvas. It can be found in the headcrashing against the walls; in the scratches inscribed with nails, in the walls discoloured by tears; in the bindi that once was on someone’s head but now shines on the wall like a sun rising from the horizon. This poetry emerges as a ghostly face, haunting like the Scream by Edvard Munch.

Of course, we have darbari poets, poet bureaucrats and poet corporates, the poet who participated in the riots and the poet who became the Prime Minister.  We have the poets who surrendered their souls and the poets who surrendered their awards. There are the poets who have silenced themselves out of fear and there are the poets who become the belligerent trolls. There are poets who reinvent the words and reignite life and there are poets whose words create lynching mobs. But why shall we not talk about the poets, writers and activists whose life and fights have been a message for poetry? It is the utopian but uncompromising principles of poetry that heal the civilisation from historical wounds. We need to save and defend these poets.  Hiding in the caves of Aravali, Poet Vidrohi is still calling, tum mujhe bachao, main tumhara kavi hun (You save me, I am your poet). The call is not about a narcissistic life of a poet; it is about the urgency of life that a poet transports.

Brahma Prakash is Assistant Professor of Theatre and Performance Studies at the School of Arts and Aesthetics, Jawaharlal Nehru University, New Delhi.