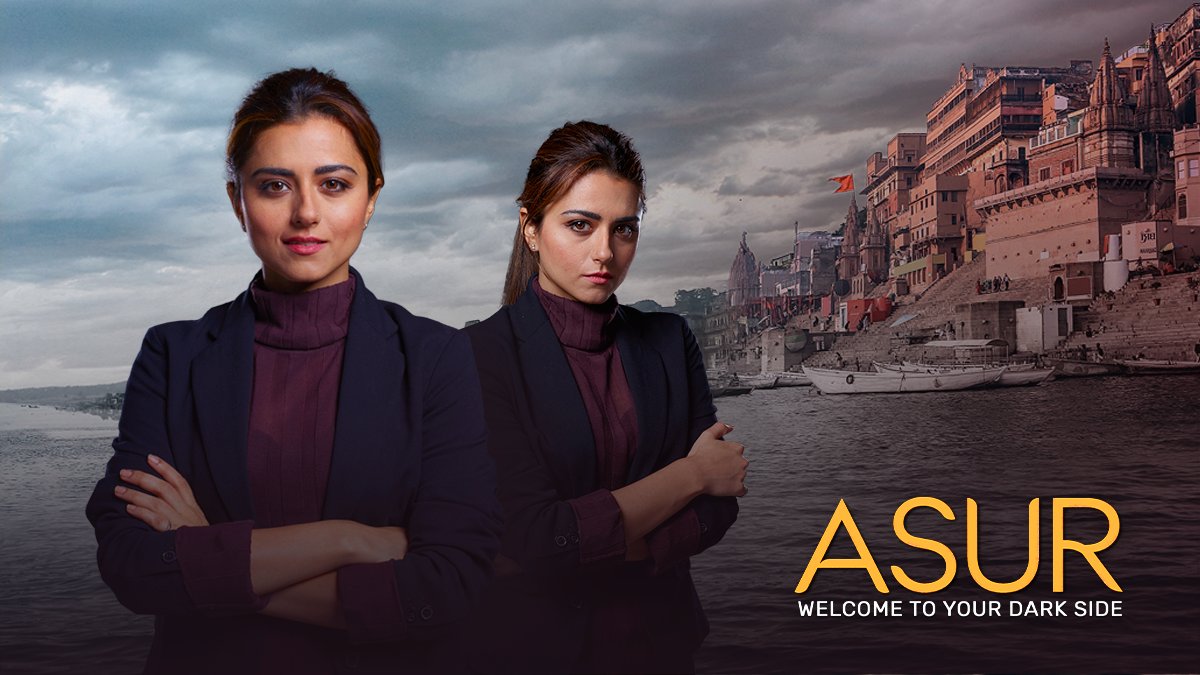 It was morning by the time I completed watching Voot’s new thriller series, Asur, whose poster had been on my mind from Mumbai’s vast billboards during a visit to the city in early March. Yet, as the morning sun lit my room and the series came to a crushing, somewhat confusing, and personally uncomfortable end, the character that left me wanting for more was neither of the two male leads. It was the character of a woman. To be precise, a Muslim woman, named Nusrat Sayed.

This article is an attempts to decipher, how and to what extent, Muslimness of characters from recent popular film and media, is portrayed or is influential to the plot. The character of Nusrat Sayed helps anchor a brief analysis of the representation of Muslims in mainstream Indian cinema. Ridhi Dogra plays Nusrat Sayed with as much competence as her screen time allows her to. However, ever since her first appearance in the series, it was not Dogra’s acting but Sayed’s character, which could have easily passed off as Hindu, Sikh, Jain, etc. if it wasn’t for her name – a name so unmistakably Muslim. Yet, Sayed’s Muslim identity does not seem to overtly affect the plot. And if not for a mere thirty-seconds telephonic conversation that she has with her mother, where she uses the words “Ammi” and “Khuda Hafiz”, her religious identity could have effortlessly been left untouched by the show’s writers. Then why does the not-so-necessary-to-the-plot phone call occur? Why is she Muslim?

The answer to this question is known only to the show’s writers, and if the decision was a deliberate attempt by them to incorporate a Muslim character in the show, it felt good. It was heart-warming to see a Muslim woman onscreen not being stereotyped into kajal-lined eyes and jhoomar adorned foreheads but be given an attire suited to her role. It was even more encouraging to see a Muslim character, a woman at that, portrayed as a senior officer in the Central Bureau of Investigation. Especially, with Indian Muslims forming only 2.95% of the 5,018 IAS officers and 4.02% of the 3,236 IPS officers in the country in 2002, Nusrat represents a minority within a minority— Muslims in positions of power.1

Recollections of a similar representation are scarce in memory, owing either to my lack of awareness of the cinema produced around the country or to the lack of the existence of Muslims in professions that provide them the resources and methods to make a positive impact on their community. The only other movie with an influential Muslim character that comes to my mind is Shahid, which was not about a fictional character, but was the biopic of lawyer Shahid Azmi. Again, the character represented two-fold marginalization, since Muslims are severely underrepresented in the judiciary as well. Statistics show that only 6.26% of the 479 High Court judges in 2002 are Muslim without a single judge from the community in the Maharashtra High Court, and Muslims make up only 3.9% of the Gujarat High Court Bar Association.2

There are, however, Muslim characters that have stayed with me. Some recent ones that I can recall include Murad and Safeena of Gully Boy and Imran of Zindagi Na Milegi Dobara. The same is the case with Nusrat Sayed. Simply the fact that her identity as a Muslim is made known from the very start, through repetitive usage of her name, and is consolidated during her conversation with her mother says something about the intentions, presumably good, of the show’s writers. An intent that was felt heavily in the series’ last episode, when CBI officer Lolark Dubey suspects his coworker Rasool Shaikh as being involved with the serial killings that form the central plot of the series. While Dubey’s suspicion of Rasool is portrayed as originating from the latter’s secretive personality, an uncomfortable tinge of Islamophobia is unmissable, especially in 2020’s communally hostile and tensed atmosphere. Perhaps it is this uncomfortable but prevalent Islamophobia that the writers of the show wished to counter with a character like Nusrat. If so, their attempts are appreciated at a time when trailers of movies like Sooryavanshi openly declare that only a certain kind of Muslims are accepted as Indians. An empathetic and strong bureaucrat like Nusrat, who is not only committed and honest towards her job but also says “Khudahafiz” while on it without shame is inspirational for young Muslims struggling with their religious identity in times when they constantly face hostilities as a result of it.

While Nusrat’s character is a welcome presence, it would be ever more impactful to see Muslim identities as significant to the plot rather than being a simply stock addition. To start with, their Muslimness can be addressed more adequately, such as the marginalization, discrimantion, and ghettoisation that is associated with it and is becoming increasingly frequent in contemporary communal scenarios. A film which does some work in this respect is Pati Patni Aur Woh. Fahim Rizvi’s (played by Aparshakti Khurana) friendship with character Abhinav Tyagi (Kartik Aaryan) is important in times when politics of hate is severing friendships as more and more of our childhood friends come out as closeted Sanghis and post Islamophobic comments on social media. Moreover, Rizvi is a Muslim living in Uttar Pradesh which is again an underrepresented section of the Muslim community in cinema. According to the Sacchar Committee Report, 26% of India’s Muslims live in the state. Yet, even though Bollywood’s attention increasingly shifts north with numerous films based in Uttar Pradesh (Bareilly ki Barfi, Kanpuriye), Muslims of the state rarely make it on screen.

Nusrat’s character sends another important message. The presence of Muslims in circles— social and political— is not normalized and therefore stands out like a sore thumb. While finding upper caste Hindu characters in influential positions is so commonplace in films that viewers hardly seem to notice anything out of the ordinary. Movies like Padmaavat are not questioned about their Islamophobic intentions for portraying an actual historical figure, a Muslim king, as a meat-eating barbarian. It is one thing to exaggerate an undeniably ruthless sovereign for dramatic effect but another to completely change him into a psychopath and blame his desire for power not on his position as a Sultan, but on his being Muslim. It then becomes essential that movies like Raazi, which was released five months after Padmaavat, receive the same attention when they portray a Muslim woman spy who is making such a tremendous sacrifice for her country. The patriotism of such characters, given how the movie was based on a true story, should be applauded when Muslims are so often questioned on their Indianness. If bad Muslim characters are so easily hateable, then good Muslim characters should not be ignored when it is their turn for appreciation. It is imperative now that the presence of Muslims, as people going about their lives with or without a skullcap/headscarf, be normalized in mainstream media.

First published on In Pursuit of Serotonin, Abdin's personal blog.
Disclaimer: The views expressed in this article are the writer's own, and do not necessarily represent the views of the Indian Writers' Forum.