Since its inception in 1925, the RSS has perplexed observers with its organisational skills, military discipline and single-minded quest for influence in all walks of Indian life. Relying on original research, interviews with insiders and analysis of current events, Dinesh Narayanan's The RSS and the Making of the Deep Nation traces the RSS's roots and nearly century-long operations in the relentless pursuit for ideological dominance in a nation known for its rich diversity of thought, custom and ritual.

The following is an excerpt from the chapter "The God of Power" of the book. 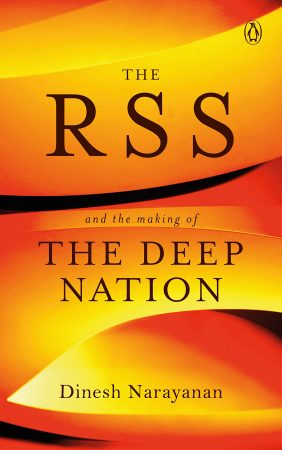 In 1963, Golwalkar sent Ranade, who had quit the position of RSS sarkaryavah some months ago, to take charge of building a memorial to Swami Vivekananda on a rocky islet off the southern tip of the subcontinent in Kanyakumari.1 It was the birth centenary year of the monk who had delivered a famous speech at the first Parliament of the World’s Religions in Chicago on 11 September 1893. A disciple of the mystic Ramakrishna Paramahansa, Vivekananda, as Jyotirmaya Sharma writes, addressed three major concerns of nineteenth-century India—Hindu identity, Hindu nationalism and an equal ‘dialogue’ between Hinduism and other faiths.2

Vivekananda’s virile Hindutva coupled with his nationalist fervour influenced Indians across the social, regional and political spectrum. Vivekananda had pronounced India as the punyabhoomi— many years before Savarkar would articulate it in Essentials of Hindutva—the land where humanity had attained the highest summits in gentleness, generosity, purity, calmness, introspection and spirituality. The world owed much to the mild Hindu, and the Hindu had lost touch with his tradition because of invasions and conversions. He wanted the nation to be physically strong, of ‘men with muscles of iron and nerves of steel’, whose manhood was to be forged from the valour of the Kshatriya—Kshatra-virya, and the Brahmin’s power of intellect—Brahma-teja.3

The memorial to this nationalist-philosopher-mystic on the rock in Kanyakumari, where he had once meditated, was an important symbol for the Hindu nation of the RSS vision. It was a shrine to Hindu nationalism, and Ranade, a shrewd networker and adept organizer, was sent to Kanyakumari for this pursuit.

Ranade arrived at a time when there were tensions over the ownership of the rock, which was claimed by the large Christian fishermen community for St Xavier. A few local committees that were involved in the Vivekananda memorial had by then evolved into a larger all-India committee with Kerala social reformer Mannath Padmanabhan as its president. Then chief minister of Tamil Nadu, M. Bhaktavatsalam, was against building anything on the rock. Though he was insistent that the rock must be established as Vivekananda Rock and that it had nothing to do with St Xavier as the Christians believed, he had indicated that he would allow only a plaque on the rock. He offered a plot on the shore to build the memorial instead. A few members of this committee had approached Golwalkar to spare someone from the Sangh to canvas at the national level.4

Golwalkar sent Ranade because he had worked in Calcutta and written a book on Vivekananda. He knew the leadership of the Ramakrishna Mission well and more crucially, had a good network among Congressmen in Delhi. This was because he had stationed himself in Delhi to clear the Sangh’s name when it had been banned in 1948. There, he held secret discussions with Sardar Patel on a political role for the RSS.5 Above all, he had a reputation in the Sangh: If you want to move the Qutub Minar intact, go to Ranade.

In his recollection, The Story of the Vivekananda Rock Memorial, Ranade recounts in detail how he went about building the memorial, using persuasion, guile and leveraging relationships. He spent the next few years working on the project, skilfully cultivating the media, politicians and businessmen to get permissions and funds for the project. He camped in Delhi while Parliament was in session and began frequenting Parliament House every day to canvas support for the proposal. After consulting Congress leader and Union minister Lal Bahadur Shastri, whom he knew, Ranade started a signature campaign to rally support and shrewdly tapped the most influential politicians. He first got Raghunath Singh’s signature, an influential MP from Benares who was also the secretary of the Congress Parliamentary Party on a petition addressed to Prime Minister Jawaharlal Nehru. Singh’s signature on the top of the page ensured that other Congress MPs signed without question. He collected ninety signatures in the central hall of Parliament within an hour. He also got Ram Manohar Lohia, Vajpayee and leaders from other parties to sign as well.

Next, Ranade contacted communist leader Renu Chakravarti who got him signatures of all her party MPs from Bengal. The next target was Annadurai of the Dravida Munnetra Kazhakam (DMK) whom he met through the party’s MP Nedunchezhian. Not only did Ranade get Nedunchezhian’s backing for the petition, he also got Annadurai to be a member of the general body of the committee and Nedunchezhian as vice president of the state committee. Annadurai’s blessings ensured the backing of all his party MPs. Altogether, Ranade got 323 MPs to back the proposal and sign the petition which would be handed over to Nehru by M.S. Aney, the oldest parliamentarian then. Aney was an old friend of the RSS and had written the foreword to Golwalkar’s book, We or Our Nationhood Defined.

Ranade approached Lal Bahadur Shastri after securing the signatures. Shastri had earlier promised to intervene with Nehru if he managed to get enough support for the project from other MPs. Now he did, and Nehru issued a statement in response to the petition. ‘As far as the Government of India is concerned, we shall very much like to have Swamiji’s statue on the rock. But, after all, it is a matter of the Madras government to decide. However, I’m going to Madras soon for unveiling of Swamiji’s statue.6 At that time, I shall speak to the chief minister and see what I can do in the matter.’

While Ranade garnered political support for the project in Parliament, he also collected funds from state governments. Practically every state government contributed to the building of the statue and even the communist government in Kerala, though reluctant when E.M.S. Namboodiripad was the chief minister, released money after Achyuta Menon took over. Tamil Nadu chief minister Bhaktavatsalam, who was vehemently opposed to the project, later became the patron of the Tamil Nadu Committee and sanctioned Rs 4.25 lakh to build jetties. Ranade scrupulously kept politics out of the cause he was espousing and focused on consensus building. In sharp contrast, the Sangh Parivar’s approach and language during the Ram Janmabhoomi agitation was aggressive and confrontational. Ranade also mentions that Bhaktavatsalam had made him out to be an agitator who would stop at nothing. In Ranade’s view, if he had to agitate to put up a memorial to Swami Vivekananda in this country it would be a disgrace.7

It was not as if politics was not involved. Part of Bhaktavatsalam’s objections rose from the large section of Christians in Kanyakumari who were traditionally Congress voters. And often there was tension in the district over the rock memorial project. He was worried the issue would become communal and violent.

In 1962, RSS Calicut vibhag pracharak, P. Madhavan, and district pracharak, V.P. Janardanan, selected eight men for a ‘mission’ in Kanyakumari. In an account published in the Organiser, the only surviving member of the team, P.B. Lakshmanan, who was then mukhya shikshak of Vallyil shakha in Calicut, recalled that they organized a boat and took it to Kanyakumari by road. Then RSS prant pracharak, Dathaji Didolkar, had told them that a cross on the rock had to be removed before Vijaya Dashami. Lakshmanan and four others clandestinely reached the rock by boat and removed the cross with powerful drills used in road construction. The next night, another cross was erected which was once again uprooted by the RSS team.

This is an excerpt from The RSS and the Making of the Deep Nation written by Dinesh Narayanan and published by Penguin. Republished here with permission from the publisher.
Dinesh Narayanan is a Delhi-based journalist currently writing for The Economic Times.