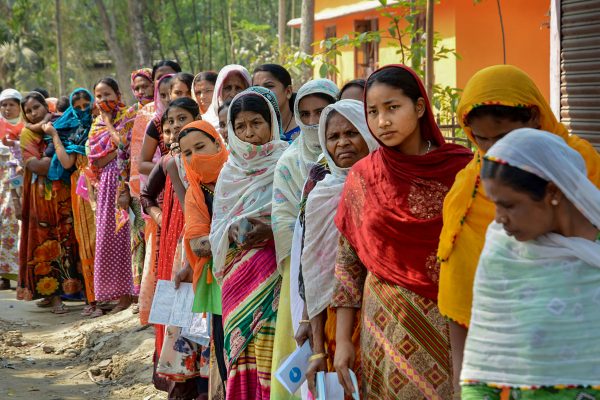 An online meeting of the following women’s organisations — All India Democratic Women’s Association(AIDWA), National Federation of Indian Women (NFIW), All India Progressive Women’s Association (AIPWA), Pragatisheel Mahila Sanghatan (PMS), All India Agragami Mahila Samiti (AIAMS) and All India Mahila Sanskritik Sangathan (AIMSS) held on July 19 and 30, 2020, has decided to hold protests all over the country demanding food, work, health services and for protection of democracy. This meeting was attended by the national presidents, general secretaries and other office bearers of the respective organisations.

Representatives of all the organisations expressed serious concern regarding the employment and food security of women in the country. The escalating pandemic and recurrent lockdowns have created havoc in the lives of the marginalised sections. Majority of the people, especially women, have lost their livelihoods and are on the verge of starvation. The governments have promised that MNREGA work will be provided. But the truth is that a large number of women are not getting any work. The distribution of free food grains as well as ration grains is not uniform. Many of the poor households have been denied their right to the food grains. Rampant privitisation of the public health services have left the people in a helpless situation. The health system is not attending to any other health emergencies except those related to Covid-19 cases. This has created enormous hardships for pregnant and lactating women in urgent need of medical care. There have been instances of women and children dying due to refusal of the hospitals to attend to their needs. The lockdowns have also increased the vulnerability of women. Increase in cases of domestic violence point to this fact. Women in Self Help Groups are being harassed, abused and threatened by the MFIs and the governments have turned a deaf ear to their appeals to take action against these collection agents.

Instead of attending to the problems of the people, the BJP government is pushing ahead with its pro-corporate agenda of rampant privitisation. The government is yet to implement its meagre but promised measures to ensure food security, create job opportunities, and provide cash support to migrants, women and other workers to survive the unplanned measures like full and partial lockdown.

The government has also launched a systematic attack on democracy and democratic dissent taking advantage of the restrictions imposed due to the pandemic. False cases have been filed and police action has been initiated against activists who have led the protests against the authoritarian policies of the Modi Government. This has resulted in arrests of students, journalists and other prominent activists, without any concern or regard for their health. Even senior citizens with co-morbidities have been arrested and confined in very crowded places without following standard operating procedures stipulated in government programmes.

In the light of this worsening situation, the national women’s organisations decided to jointly take up issues of food security, employment, access to health facilities through free treatment, cash transfers to migrants and women, deepening agrarian distress, anti-worker labour law reforms, etc. They also decided to undertake a sustained campaign against the draconian and authoritarian measures of the Modi Government, particularly with respect to targeting of minorities, dissenting activists and students. Issues related to increasing violence against women and spread of superstition regarding the pandemic were also raised at the meeting. The national women’s organisations have decided that the need of the hour is to have a massive mobilisation of women to defend our hard-earned rights and ensure the implementation of urgent steps to help women facing hunger, health issues and economic distress arising due to the anti-people’s policies and inept handling of the pandemic by the BJP regime.

The organisations reiterated its commitment to mobilise women for broad-based struggles on common issues affecting the marginalised sections of our population. Joint meetings of state-level women’s organisation will be organised in all the states in the coming days. The joint women’s organisations have appealed to all organisations of workers, farmers. agricultural labourers, youth, students and various democratic movements to join this protest on August 28.