The arrest of Mahmoud Nawajaa, general coordinator of the Palestinian Boycott, Divestment and Sanctions (BDS) movement’s National Committee (BNC) in Palestine, has invited global condemnation and demands for his immediate release are being raised by activists worldwide. Nawajaa (34) was arrested by Israeli forces in Ramallah in the occupied West Bank early morning on July 30, Thursday. 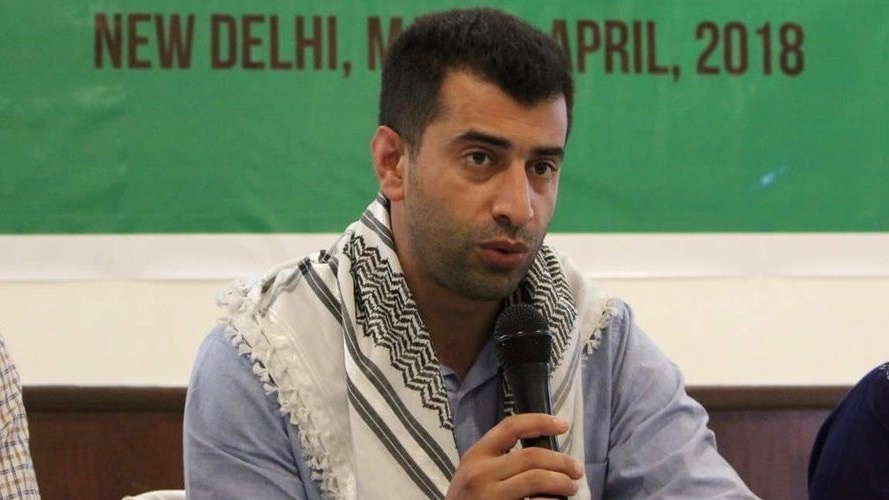 Nawajaa has been a vocal opponent of the Israeli occupation and apartheid against the Palestinian people. He has also criticized Israel’s proposed annexation of parts of the occupied West Bank as a crystallization of “a 21st century apartheid”.  Pointing to Israel’s consistent denial of Palestinians’ “inalienable right to self-determination”, he has previously said that “it is high time for all states and international organizations to comply with their legal obligations by adopting effective countermeasures, including sanctions” against Israel.

According to a statement issued by the BDS movement, scores of Israeli forces personnel stormed Nawajaa’s home at around 3:30 a.m on Thursday, blindfolded and handcuffed him in front of his wife and three children, before taking him away. According to the last reports, even after 24 hours of his arrest, his whereabouts are still unknown.

Israel’s bid to attack all form of resistance

Nawajaa was among 17 Palestinians arrested by the Israeli forces from different parts of the occupied Palestine on Thursday and Wednesday. Jamal Juma, one of Nawajaa’s colleagues in the BNC in Palestine, told Middle East Eye that they have no information about his whereabouts. “They [Israeli occupation forces] are attacking any form of resistance movement in Palestine, including the BDS movement,” Juma said.

Taking its cue from the South African anti-apartheid movement, the BDS movement was launched by Palestinians in 2005 as a global campaign for the economic and cultural boycott of Israel in order to pressure it to end its occupation and apartheid against Palestinians. Israel has actively tried to suppress its activities and discredit its agenda by calling it anti-Semitic.

BNC is a coalition of more than 200 organizations inside occupied Palestine, including various women’s groups, trade unions and other civil society and political organizations united against the Israeli occupation and peacefully campaigning for the boycott of Israel.

The BDS movement’s co-founder, Omar Barghouti, issued a statement following news of Nawajaa’s arrest and called for his immediate release. As per the statement, “Israel’s regime of military occupation, settler colonialism and apartheid is desperately trying to terrorize Palestinian BDS activists and their families, after having failed to slow down the growth of the movement. We call on all BDS activists everywhere to further strengthen BDS campaigning to hold Israel accountable”.

Several other organizations across the globe condemned the BDS activist’s arrest and demanded his immediate release. BDS Colombia pointed out that “by stopping him they attack the heart of the non-violent campaign for Boycott, Divestment and Sanctions on Israel.” It called on activists everywhere to ” demand the immediate release of Mahmoud and all Palestinian prisoners and prisoners.” BDS India issued a statement calling for solidarity across the movement. “We in India know much too well the face of persecution and the moral necessity to defend prisoners of conscience. The use of draconian laws like UAPA to silence dissent is an ongoing battle for us. We understand the need to build solidarities across movements, especially as the regimes that rule us start to mirror one another,” the statement reads.

Ireland Palestine Solidarity Campaign (IPSC) too has issued a statement condemning the arrest. It said the arrest is yet another attack by “the Apartheid state of Israel on those who speak out and organize against its crimes against the Palestinian people. That a human rights defender and community leader can be arrested in the dead of night, in front of his wife and terrified small children by dozens of armed soldiers speaks volumes about Israel’s system of oppression.” IPSC also demanded that the Irish government intervene to secure Nawajaa’s release.

Irish Congress for Trade Unions released a similar statement demanding the Irish state to intervene in the matter to secure the release of Nawajaa.

CODEPINK  in a tweet called the arrest totally reprehensible, and drew parallels between the US government’s actions against the Portland protesters and the arrest of Palestinian activists by the Israeli state.

From Palestine or Portland, both alleged "democracies," kidnapping activists & journalists is not only reprehensible, but wholly undemocratic. #FreeMahmoud https://t.co/4VivLum4nG

Several other activists and groups from across the globe have been participating in the #FreeMahmoud campaign on Twitter and other social media platforms.