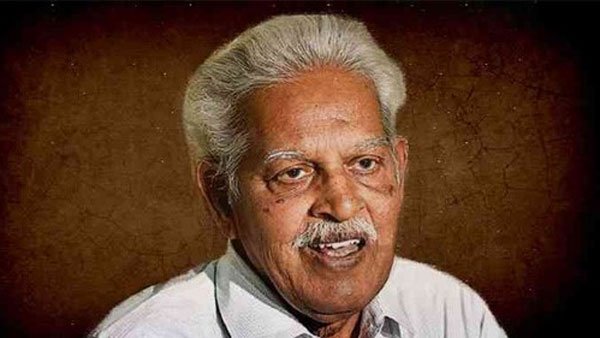 Activist and writer Lalita Ramdas has slammed the National Investigation Agency (NIA) for suggesting that the nearly 80-year-old poet Varavara Rao who is now battling to survive Covid-19, and many other health issues, “is trying to take undue benefit of the pandemic and his old age and seeking bail.” The NIA made these shocking remarks in its submission before the Bombay High Court on Monday.

Reacting to this despicable accusation, Ramdas took to social media saying, “Stunned. Speechless. And Ashamed that this is happening in our greatest, largest, democracy?” She wondered how we have “ become so callous, so utterly lacking in compassion and humanity.” Ramdas has brought out a point many are missing as they follow the official apathy towards the ailing veteran poet today. She reminds everyone that “every regime has been complicit,” in this. This fact is seen in the “paralysis among all the political parties. But the brute majority in Parliament, seized by muscle and money power, has resulted in the exercise of brazenness and impunity, unparalleled in living memory…”

Reflecting on the deeds of a heartless and vindictive regime, Lalita Ramdas shared these powerful words:

“Dear citizens, read, share, and think about the implications of what is happening under our distracted and unseeing gaze.

Raise your voices, write, speak, protest, stand up and say No more.

OK, even if someone had been a member of a "banned" outfit … Does that person still not deserve due process of law, compassion, dignity and adherence to basic tenets of human rights accorded to all prisoners?

We are living in a totalitarian, dictatorial regime, masquerading as a democracy. And the words of the German Pastor Niemoller, come to mind repeatedly:

First they came for the Jews, and I was silent, for I was not a Jew;

Then they came for the Trade Unionists, and I was silent……..

Then they came for the communists, and I was silent…..

And so on, pick your groups and categories,

Muslims, Dalits, Maoists, Dissenters, Anti CAA protesters, Adivasis, Migrants, Trade Unionists, Farmers, Feminists, Resisters and Protestors …………..and I was silent….I was none of those categories

There was no one left to speak up for me….”

The Hindu reported that the NIA told the Bombay High Court that “the bail application, if any, is to be decided on the facts and circumstances of each case and perusal of the incriminating material against the person,” adding that “accused P Varavara Rao, 81 under the garb of the current situation on the account of global pandemic of Covid-19 and his old age is trying to take undue benefit of the situation in seeking bail.”

According to the news report the NIA had filed an affidavit on Monday stating, “Mr Rao and other accused in the case (Bhima Koregaon) have been charged with various offences under chapter IV (punishment for terrorist activities) and V (forfeiture of proceeds of terrorism or any property intended to be used for terrorism) of the Unlawful Activities Prevention Act (UAPA) as well as Indian Penal Code wherein the prescribed punishment is more than seven years and may extend to imprisonment for life. Therefore even though the guidelines issued by the Maharashtra High Powered committee permits an under-trial prisoner above 60 years of age merely to apply for an interim bail [and not to be granted bail mechanically]. As it is purely the discretion of the court adjudication the bail application as such the court ought to have exercised its discretion.”

Varavara Rao’s nephew, N Venugopal, who has been keeping everyone up to date with all the information he has managed to gather even as the family is denying access to the seriously ill poet shared their anguish yet again,  “Are these people human beings? Is this rule of law? An eighty-year old prisoner has been languishing in jails for the last two years. The great courts rejected his bail application four times. At last his health deteriorates and he is brought to hospital in a fatal condition. At the same time a lethal infectious pandemic engulfs the country and turns everything upside down. The court is requested to grant him bail in the obtaining situation of the prisoner’s age, ill-health and the risk of infection. The agency that is investigating his case argues that he is taking “undue advantage” of his age, ill-health and pandemic and hence he should not be granted bail.”

The Hindu reported that this 170-page affidavit was filed by Vikram Khalate, Superintendent of Police, NIA, Mumbai. It added that any bail application, “is to be decided on the facts and circumstances of each case and perusal of the incriminating material against the person. Considering the charges and totality of facts including the fact that adequate evidence has been placed on record to prove the complicity of the accused Mr Rao.” It added, “It is very clear in the findings recorded that the prison authorities responded timely and provided necessary medical aid to him. He was admitted at JJ Hospital for the complaint of giddiness on May 28, 2020 and after medical treatment he was discharged on June 1, 2020 as he was found asymptomatic and haemodynamically stable.”

The news report added the NIA conclusions stating, “Cogent evidence has come on record that Mr Rao is a senior member of the banned Communist Party of India (Maoist)  and is not only involved in planning and preparing violence but was in the process of creating large scale violence, destruction of property resulting into chaos in the society and thereby destablising the government established by law to fulfil the objectives of the Communist Party of India (Maoist) a ban organisation which is listed in the First Schedule of the UAPA.”

Interestingly, even though Rao is suffering from Covid-19, the affidavit, as reported by The Hindu states, “The report submitted by the Superintendent of JJ Hospital does not suggest that he is suffering from any such ailment which necessitates him to immediately obtain treatment in multispecialty hospital from specific doctor. ‘Thus it is clear that the pleading with regard to the medical condition of the petitioner (Mr Rao) is merely a ruse to obtain an order of interim relief which is not available to him otherwise on the merits of the case.’”

According to Venugopal, it must be remembered that, “A prisoner by definition is one who is in judicial custody. A Court has all the powers to decide anything about a prisoner. Nobody else has any right to intrude. The investigating agency’s role ends at making allegations against the prisoner and gathering evidence to be placed before the court. Prisoners are not under the purview of the investigating agency. But it seems those sitting on the high pedestals of the courts do not have this simple legal knowledge. They do not seem to know their powers. They seem to be spineless. Now the question to be asked by all those who are concerned with democracy and rule of law, is whether the judges know jurisprudence, law and natural principles of justice.”

As Rao’s health further deteriorated, his family had approached the court to “at least allow them to see him and provide assistance”.  But as Venugopal says, “The honourable learned court asks the investigating agency whether the family could be allowed to see his family. In this process days and weeks roll on.  If you think you are a human being, the question you need to ask is whether these men making these arguments, decisions and procrastination, are really human beings.”