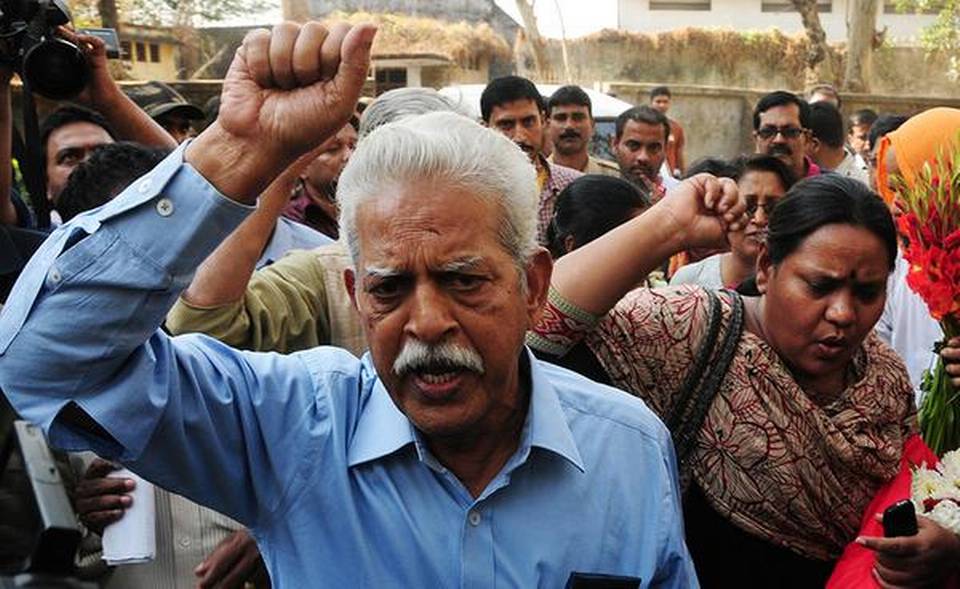 The renowned Telugu poet and political activist Varavara Rao has been in police custody since 18 November 2018. The charges against him are waging war against the state, conspiring to overthrow the government and plotting the assassination of Prime Minister Narendra Modi.

Varavara Rao is one of India’s foremost intellectuals who has inspired three generations of activists, writers and students. He is one of the founders of the Viplava Rachayitala Sangham (Virasam) or Revolutionary Writers’ Association which has played a major role in the development of Telugu literature in the last half-century. His poetry—which speaks of the brutality of state and societal repressionf, and expresses an unwavering commitment to the struggle for social justice—has been translated into all major Indian languages.

According to a profile published on the Poetry International Archives website in Varavara Rao’s poetry “there is evidence not only of commitment to a cause but commitment to craft. These are poems of anger, of outrage, biting indictment certainly. But there is also a palette of tonal variety. For Rao is also a lyric poet whose work is capable of combining elegy with hope.”

In addition to being a poet, Varavara Rao is a renowned literary critic and translator. His PhD thesis, “Telangana Liberation Struggle and the Telugu Novel: A Study Into Interconnections Between Society and Literature”, is regarded as one of the finest works of literary criticism in Telugu literature. He has also taught literature for 40 years, during which time he launched the popular literary magazine, Srujan. The magazine provided a platform for the promotion of modern Telugu literature and was published for over 25 years until 1992.

The persecution Rao under the Modi regime comes, of course, as no surprise. Writers and poets have always been at the forefront of political dissent under authoritarian and autocratic governments and are always among the first voices to be suppressed during such times.

Varavara Rao is no stranger to harassment and imprisonment by the state. He was first arrested in 1973 because the revolutionary nature of his poetry was seen as a threat by the government. At that time the Andhra Pradesh High Court had ordered his release, stating that writers cannot be arrested for simply giving expression to their imagination. He was arrested again in 1974 and then in 1985 but was on both occasions eventually acquitted of all charges.

When the Emergency was imposed in 1975, Rao—who had recently got out of jail on bail after being charged in the Secunderabad Conspiracy Case—was promptly rearrested. Thirty other members of Virasam were also sent to jail during this time. Refusing to be silenced, they kept their struggle alive by collaborating to launch a hand-written literary magazine for the prison inmates.

Rao has spent a total of eight years in prison so far, but prison walls have never been able to restrict his artistic spirit. He has continued to write poetry and translate important literary works into the Telugu language even while incarcerated. In fact, almost half of the corpus of his writings has been composed in jail.

Varavara Rao’s most recent arrest was for his involvement in the Elgar Parishad rally which took place in December 2017. The event was alleged by the police to have Maoist links and was held responsible for the Bhima Koregaon anti-Dalit violence that followed.

All “evidence” against Rao in the case is based on some letters recovered from computer hard drives which were seized by the police from the homes of various political activists. The police failed to follow proper protocols during the raids and in the gathering of data from the hard drives. An investigation by Caravan magazine has revealed that the hard drives contained a kind of spyware which allows their activity to be monitored and files to be planted on them from a remote source. Since then, there have been reports of spyware attacks on several other activists as well. This strongly suggests that the evidence is fabricated.

The contents of these letters led to the imprisonment of ten others in addition to Varavara Rao: Surendra Gadling, Sudhir Dhawale, Mahesh Raut, Sudha Bharadwaj, Rona Wilson, Shoma Sen, Gautam Navlakha, Arun Ferriera, Vernon Gonsalves and Anand Teltumbde – all of whom are well-known social and political activists and have been openly critical of the Modi government.

Recently, in a letter addressed to Maharashtra Chief Minister Uddhav Thackeray, former information commissioners Shailesh Gandhi and M Sridharacharyulu have stated that there is no implicating evidence against Varavara Rao. They have pointed out that the Pune police and the state investigation teams investigated the case for 16 weeks but could not collect “even an iota of evidence”.

The Maharashtra government, which recently came to power, had also declared that they would close his case file soon. But the Union government hurriedly transferred the case to the National Investigation Agency, preventing any possibility of justice.

Rao is now 80 years old. He recently developed major health complications, including contracting Covid-19, which obviously happened while he was in state custody. After a public outcry over his deteriorating health in the over-crowded Taloja Central Prison in Mumbai, he was finally hospitalised at the city’s JJ Hospital on 13 July. His continued imprisonment under such circumstances, especially in the face of the risk posed by the Covid-19 pandemic, is completely unacceptable. He must be released and the charges against him dropped immediately.

It is a matter of shame that while dreaded criminals often receive political patronage in India and are able to remain outside prison even after having multiple cases filed against them, intellectuals like Varavara Rao are made to languish in jail. The failure of the government on various fronts like foreign policy, domestic law and order, tackling the coronavirus crisis or the associated problems of migrant workers and the sagging economy is partly because the Bhartiya Janata Party government has been busy pursuing the political agenda of the Rashtriya Swayamsewak Sangh and acting with political vendetta against citizens who question the RSS-BJP ideology.

What else could explain the incarceration of activists when the government is otherwise preventing mass gatherings by keeping educational institutions closed and asking people to remain at home? The string of vengeful actions taken by the state against citizens who participated in the anti-Citizenship Amendment Act and National Register of Citizens movement, all through the coronavirus crisis and the lockdown period, are a reflection of the priorities of our present government.

Sandeep Pandey and Surabhi Agarwal are associated with Socialist Party (India). The views are personal.