Written by Sangeeta Mulay, Savitribai Phule and I (Panther's Paw Publication) is the story of Shabri, a shy dalit girl from a deprived village who discovers a diary written by Savitribai Phule. The book details the evolution of the protagonist from a shy introvert who has faced discrimination and prejudice throughout her life to a confident feminist and activist. 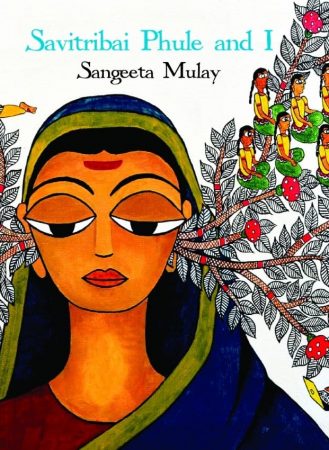 A Letter to Readers

The caste of the author becomes important when you are writing a book on caste. I belong to the privileged Maratha caste and have written this book very much aware of my caste privilege. For not having the lived-in experience of our Dalit sisters, and for hijacking their narrative, I can only apologise.

There are three main reasons why I have written this book.

To write about the necessity of reservations. The word ‘merit’ has the baggage of privilege and it is time that the social, economic and cultural privilege enjoyed by the privileged castes for centuries is brought out in the open. This book is an attempt to make the upper-caste young adults aware, understand and finally acknowledge their caste privilege. It is an attempt to change the narrative from reforming the Dalit to reforming the upper-caste.

To offer a feminist perspective. How does a rural Dalit girl of the under-privileged class, dark skin and caste survive in a city all by herself with no one to mentor her? How does she handle the discrimination that she has to face almost daily on account of her class, colour, accent, dress sense, English language skills and her ‘coolness quotient’ in a big city? Does she withdraw into herself, or does she strengthen her resolve to face the challenges that are thrown at her. There have been several narratives about boys/men but very few about girls. This book attempts to trace the journey of such a girl.

It is my hope that this book raises awareness and cohesiveness.

College of Engineering – somewhere in the city, a long time ago.

The professor had written a complicated looking math problem on the blackboard. Meticulously, I bent over my notebook and took the step-by-step approach in trying to solve it. One step after another. No need to panic. Just take the logical and analytical approach. Step-by-step, I arrived at a solution. With a great sense of achievement, I looked at my final answer.

'Now, who would like to try and solve that?' the Professor keenly took us all in, as he surveyed the classroom with the chalk still in his hand.

'You.' The finger was pointing at me.

Agonisingly, I rose. With a shaking voice, in halting English, I started to explain the first step.

There was a smile on his lips. Emboldened, I went on to explain the second.

The smile remained. Feeling much more confident now, in a slightly louder tone, I explained the third step.

Was the smile turning into a smirk? Could I hear someone giggle behind me in the class?

Shakily, I finished with the last step and told him the final answer to the math problem.

He was laughing now. The class was snickering too.

'And, girls and boys, this is what happens when our country insists on giving reservations to undeserving, inept candidates. Reservations are dragging this country down to unforeseen depths.' He almost spat out the last bit.

Also read | Savitribai Phule and I

The heat in the room started to stifle. My mind wandered. I had seen a goat being butchered once. The image of the gory animal carcass came to mind. I could almost smell the accompanying overpowering stink of blood and hear the cries of anguish. The room went dark. Almost unwillingly I came out of my reverie. Now I could hear the ever-pervasive sounds of traffic somewhere behind the windows. Some happy person outside was listening to a popular song on the radio. A baby was crying somewhere. The innocent harmless noise of everyday life.

There was nowhere to look so I kept my eyes lowered. Justifiably, I could sense the eyes of the entire classroom on me. I knew there would not be a single sympathetic gaze there. I was the only ‘reservation category’ candidate. All the others had got there on pure merit.

'She has got the sum spectacularly wrong,' said the Professor, smirking some more. Thankfully, he did not bring up the topic of reservations again.

'Neha, would you care to explain the problem to us, please?' Neha, one of the brighter students in the class, got up.

Cheery sunshine filled the dreary classroom. In flawless English, she went on to explain each step of the problem and then stated the final solution, which was correct.

The Professor was right. I had been spectacularly off the mark. I did not raise my eyes for the remaining duration of the class. As soon as the bell rang, I bolted, away from the smirks, determined never to come back.

These are excerpts from Savitribai Phule and I written by Sangeeta Mulay and published by Panther's Paw Publication. Republished here with permission from the publisher.
Sangeeta Mulay is currently putting together an imprint called "Groggy Eyes" to write and publish fun, feminist and diverse children’s picture books.