Why dalit lives do not matter? 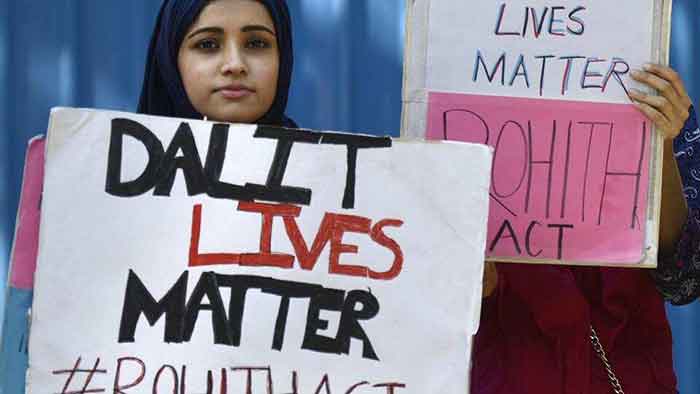 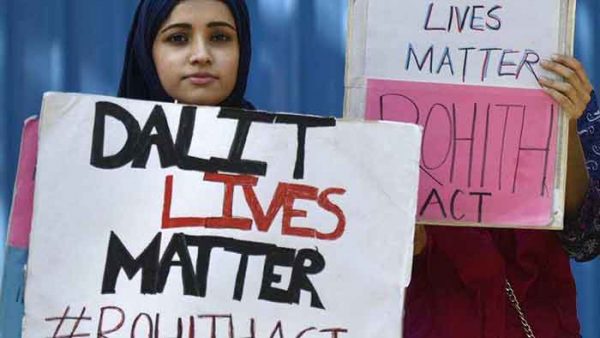 A teenaged Dalit boy was shot dead at his home in Uttar Pradesh’s Domkhera village in Amroha district at a time when the Black Lives Matter movement was shaking the whole world. He was shot dead allegedly by youths from an upper caste community for visiting a temple in the village, according to media reports. Such killing of Dalits in India is very common, more particularly after the Bharatiya Janata Party (BJP) came to power at Delhi in 2014.

Vikas Kumar Jatav (17) had visited the local Shiva temple on June 1, 2020, with his father Om Prakash Jatav, a farmer. The Telegraph reported that according to the boy’s father, a scuffle ensued after Vikas ignored the warnings of some upper caste members, including a boy named Horam Chauhan, who tried to stop him from praying at the temple on the ground of his Jatav identity and continued to pray at the temple. A death for praying in Hindu temple. What is Horam Chauhan’s caste background? We do not know. Let us assume that he is a Shudra youth and not a Brahmin or Dwija youth. Mostly Shudra youth live in villages. The Dalit intellectuals have been pointing out this fact that most atrocities on Dalits are being committed by Shudras.

This brutal killing has not become a headline in Indian media, print or electronic. Normally Dalit deaths do not. In America, any killing of a black becomes a headline. In India, it does not. Against such ghastly killing for prayer in a temple, we do not find any protests in India.

No protests like the ‘Black Lives Matter’ take place in India because, in Hindu Rastra, Dalits should not go to a Hindu temple and pray. Because Shudras who have the right to enter the temple and pray, but cannot become a priest in Hindu temple, think that the Brahmin is God and what he says should be done. They indulging in attacking Dalits must be linked to their belief in brahmin god.

Generally, Brahmin youth do not participate in such killing because they are not part of the muscle power squads and they would be in colleges and universities, as their male family members keep earning easy money in the temples. Many Shudra youths are around the villages as many do not go to college or university education, as their parents keep tilling the land or grazing the cattle.

When the notion of Hinduism as a religion was not there just before hundreds of years back, the Shudra were worshipping in their Shudra deity temples, without a Brahmin priest around and at that time the Dalit presence was not seen as pollution. A Shudra temple was equally meant for all villagers. It was not a control room of a Brahmin priest who is treated as a god. Their God was their Shudra deity, and the notion of purity and pollution was hardly in operation in Shudra temple. Shudras and Dalits were working in the fields as co-workers. They shared many common cultures. But once Brahminism is designated as Hinduism and the brahmin priest controlled the temple, the idea of God and temple changed. Brahmin actually became God, the deity in the temple is only a symbol. This belief is deep among Shudras now.

Though Mahatma Gandhi, a Bania philosopher called Dalits Harijan (with a sense of children of God) without changing the status of Brahmin, neither the Brahmin priest nor the Shudra accepted that position. Ambedkar, a Dalit philosopher, opposed that children’s status while keeping the status of Brahmin in the same position as God. Neither Nehru, a Brahmin pandit, wrote anything about Dalit status nor Sardar Patel, a Shudra iron man, applied his brain and wrote anything about it. They left in the hands of fate.

The problem of the Dalit is the Shudra, as Shudra is an agent of Brahmin to crush Dalit physically. Unlike the race problem in America and Europe which is a binary problem of black and white, the caste problem is multi-layered problem where the Shudras constitute the mass muscle power that worships Brahmin as a god, and are above the Dalit. No Shudra asks for priesthood rights for himself because brahmins are revered as god themselves

The white in the West is neither God nor does he have control over God. The Black directly negotiates with God, reads and interprets the Bible and organizes the community in the church because God does not accept racism and injustice in a church.

There is no Hinduism without Brahmin, and the Shudra surrenders to Brahmin as there is no spiritual philosophy for Shudra. Hence killing of Dalits even for praying in the temple does not invite a mass response because the Shudras who constitute 55 per cent Indian population stand by the Brahmin and his Dwija social base that constitutes Kshatriyas, Banias, Kayasthas and Khatris, apart from Brahmins, in North India. If the Dalits try to protest, crushing them with the help of the brahminic state that has the support of the Shudras is not a problem.

If only the Shudras stand by Dalits and ask a rational question: why cannot we the Shudras become priests in Hindu temples and why not Dalits who work with us in the productive fields enter the temple, the Dalit Lives will Matter. Till then, Dalit Lives do not Matter.

The other way is that Brahmins, Kshatriyas, Banias, Kayasthas and Khatris in India must think like some of the whites who are actively participating in the protests of Black Lives Matter movement think. But that becomes possible in the West because the Bible that whites and blacks read tells them that God Created All Humans (blacks and whites) equal. In India, Brahmin who is seen as god by Shudras, does not think so and say so, whatever is his ideology–right, left or centre. A Brahmin is a Brahmin.

During the Black Lives Matter movement after the death of George Floyd, the supreme court judges, who are still in service, wrote the following letter:

“Devaluation and degradation of black lives is not a recent event. It is a persistent and systemic injustice that predates this nation’s founding. But recent events have brought to the forefront of our collective conscience a painful fact that is, for too many of our citizens, common knowledge: the injustices faced by black Americans are not relics of the past…. It is the collective product of each of our individual actions – every action, every day. It is only by carefully reflecting on our actions, taking individual responsibility for them, and constantly striving for better than we can address the shameful legacy we inherit. We call on every member of our legal community to reflect on the moment and ask ourselves how we may work together to eradicate racism”.

These are white judges. Will Brahmin judges write such a letter to protect Dalit lives in India?

Some Brahmins who live in America and Europe might think that racism is bad and may participate in Black Lives Matter protest movements. But in India, they will not say Dalit Lives Matter. They also do not ask if Hinduism is a religion and Shudras and Dalits are part of it, why they do not have the right to the priesthood? Neither communist nor secular nor liberal nor Hindutva Brahmin asks this question.

If the Shudras gain access to priesthood, half of the Dalit problem will be solved. There is no such Brahmin intellectualism in India which allows this change. Because no Brahmin thinks that he is a normal human being created by God as an equal with the Dalit and Shudra, that is the inner self of any Brahmin. But no Shudra, a Jat, Patel or Maratha, Lingayath, Vakkalinga, Kamma, Reddy or a Nair understands that inner self of a Brahmin. No Brahmin condemns the brahminness in himself. No Shudra has the intellectual energy to understand that inner self of the Brahmin.

Shudras have another problem. They have not produced an intellectual or moral philosopher of the stature of Martin Luther King Jr or as blacks did or Ambedkar as Dalits did. They mainly remain a muscle power and local ruling force under the guidance of Brahmin priestcraft.

The Dalit became proud because they have a spiritual and social philosopher in Ambedkar, but no Shudra philosopher emerged to remove the Brahmin between a Shudra and God. Even then so long the Shudra remains on the side of the Brahmin the Dalits cannot succeed in their fight. Neither Sardar Vallabai Patel nor Periyar Ramasamy Naikar nor Narayan Guru could fulfil those that task. Mahatma Phule attempted, but he lived slightly earlier than the new spiritual and social enlightenment times. The Shudras now need a spiritual, social reformer to connect God to them by removing the middleman called Brahmin. The Shudras are like the blacks in the Pre-Frederick Douglass times.

Dalit Lives Matter question is also related to Shudra Spiritual Rights Matter, and they need to fight for those rights. The Brahmin god is fully in control of the Shudra mind and muscle power. When Shudras do not have that spiritual enlightenment which is a pre-condition for a change in social relations, Dalit lives continue to be in danger. As some Dalit intellectuals are arguing the problem is not just with Shudras it is with Brahmin god.

The ruling BJP and its mother organization the Rashtriya Swayamsevak Sangh (RSS) define Dalits as Hindus, but they do not recognize their spiritual rights, leave alone social rights. They do not allow the Shudras to get out of the Brahmin control. They know that Dalit social liberation is linked to Shudra getting connected to God directly by removing the Brahmin in between. The Shudra has no temple of his own now because he surrendered to Brahmin god.

Blacks in America are Christians and in the early 20th century, and they had only segregated churches for them. But by the time Martin Luther King Jr started the civil rights movements, the whites have come to accept black pastors as preachers in the combined churches. White racism and white humanism with a sense of guilt and shame moved in a crisscrossed mode to take the race question forward. Many whites wrote books demanding for black liberation. At the same time, many whites were attacking blacks with the racist life process. Hardly any Brahmins wrote books asking for Dalit-Shudra liberation spiritually and socially. This affects the Dalits more.

Blacks have produced Barak Obama who ruled America (and the world) for eight years with greater dignity than two preceding white presidents like Bill Clinton and George. W. Bush and his successor Donald Trump. In talent, culture, character and vision, the first Black president proved to be far ahead of white presidents. Michelle Obama proved to be a more intelligent and respectable first lady than her immediate predecessors and immediate successor first lady. There are many black intellectuals, writers and cultural leaders, philosophers who match white intellectuals, thinkers and philosophers. Where are Shudra intellectuals, thinkers and philosophers who could stand by Dalits and write about them?

Particularly Martin Luther King Jr and Obama made them proud people. Their leaders and their intellectuals boosted the self-respect of blacks that lead to this kind of angry reaction, and the general whites realized that blacks deserve equal respect in every field.

Where is a Shudra thinker, leader and prophetic person to educate the Shudras that Brahmin is no god and Dalit is no slave?

First published in Countercurrents.
Kancha Ilaiah Shepherd is a political theorist, social activist and author of several books including From Shepherd Boy to an Intellectual—My Memoirs.