Akhil Gogoi is a secular, progressive mass leader and founder of Krishak Mukti Sangram Samiti (KMSS), a peasant organisation of Assam. KMSS has been a frontline organization in defending rights of landless peasants, rural and urban poor. It has launched mass movements demanding resettlement of flood victims and tribal people from forest villages by securing land and forest rights. It works for protection of the environment encompasses a fight against construction of big dams in ecologically sensitive areas that threaten the lives of thousands and destruction of flora and fauna. As a relentless fighter against corruption, Gogoi has exposed several big scams involving Ministers. In 2013, Gogoi established farmers cooperative and retail outlets that connect peasantry to urban markets directly, as an alternative to FDI in retail.

Gogoi’s popularity amongst masses is reflected in his ability to mobilize people to resist state injustices; peacefully and fearlessly. As the author showcases, the state’s illegal detention of Akhil Gogoi began with his arrest under NSA in 2017 which was held illegal by the High Court. He led the anti-CAA movement because he believes that it is violative of the Constitution and also because it threatens the identities of the small indigenous communities of Assam. Following widespread mass agitation against CAA, the state has ensured continuous and illegal detention of human rights activists through the process of evergreening of FIRs.

The author argues for judicial intervention to protect human rights of activists against injustices. 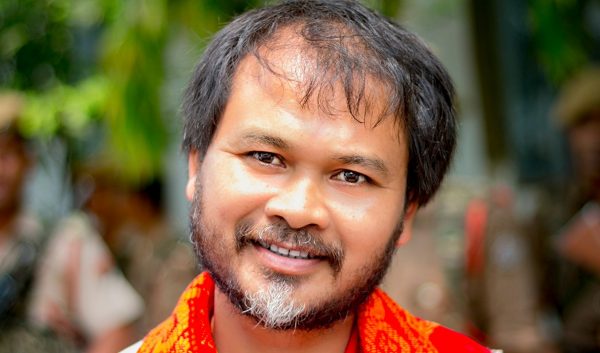 “When the reason for the law ceases, the law itself ceases”  — Decretum Gratiani

It is necessary to remind ourselves in contemporary India that politics makes the law as and when required and even remakes and replaces laws and therefore, there is a limit to the judicial system under which you seek justice. The case of Akhil Gogoi reaffirms the belief that while law regulates, politics governs!

Continuous detention of social activist Akhil Gogoi, through repeated arrests since December 12 is a major concern for those of us who believe in rule of law being a  major component of Indian Democracy. Facing trials on baseless charges is not new to Gogoi. He has been a social activist known for fighting corruption in high places and in Government, and rights of peasants, unemployed and the landless. His recent ordeal began with the anti-CAA movement in which he was able to mobilise a large number of people who challenged the bill. The bill was perceived as an attempt at changing Assam’s demography and thus threatening the cultural identity and political rights of the Assamese (legal residents) in their own homeland.

As per Government claims,  Gogoi in a meeting held at Moran (upper Assam) and said, “If Hindu migrants from Bangladesh were forced upon Assam people, people here would be compelled to take up arms.” On 13, September 2017, he was arrested under NSA. Gogoi’s organization, Krishak Mukti Sangram Samiti (KMSS) moved the High Court challenging his detention under NSA. The Gauhati High Court  quashed the detention order and directed that the

“Chief Secretary to the Government of Assam shall conduct a detailed enquiry involving all the persons, who had a role either constructive or advisory in the process leading to the order of preventive detention made against the petitioner and also as regards those involved in the procedure subsequent to the order of preventive detention. Upon such enquiry being conducted, a proper analysis be made as to where and why such serious lapses have occurred and upon doing so, effective corrective measures be taken that such lapses and lacunas do not occur in future.”

True to its character the Government did not do anything, and the Court probably forgot about it. However, what the government never forgot was that Gogoi is a real threat to the intentions of the government which were perceived by the Assamese as a threat to their existence. Despite the court’s direction, the government seems to have remained vindictive and kept on bringing charges after charges against him. It was another matter that none of those charges could be proved in any court of law.

Between Arrests and Bails

His detention has followed when he organised anti-CAA protests in Assam, which eventually spread to the entire country. He was arrested from Jorhat on December  12, 2019,  as a preventive measure while protests were on. On December 13, Guwahati police registered a suo moto case against him. The Guwahati case was handed over to NIA on December 14 and he was booked him under the infamous Unlawful Activities (Prevention) Act (UAPA). However, they failed to charge sheet him within the mandatory period of 90 days and thus he was granted bail on March 17 by Special Judge NIA.

Then Sivasagar (in upper Assam ) police rearrested him immediately,  in a case registered a year back. He was then taken by Sivasagar police on March 19 and kept under four-day police custody. On March 26, Gogoi was granted bail in another case by the Panbazaar police station. The case had been registered in January in relation to anti-CAA protests and was investigated by NIA. Again, before his release upon receiving bail in Sivasagar station, Dibrugarh district’s Chabua police station arrested him on March 28 in another case and that too without physically producing him before courts. A member of Gogoi’s legal team told reporters that the government’s advocates did not inform the court about these other cases lodged against Akhil Gogoi.

In the meantime, the NIA preferred a criminal appeal before the Gauhati High Court against the bail order given by Special Judge. The High Court stayed the operation of the bail order dated 16-3-2020 and the matter was referred to a Full Bench on the point of maintainability of the Appeal.  However, the full bench has not met to date and as a result he has been under detention. The High Court’s failure to hear the matter urgently has drawn the attention of the civil society and on May 8 a group of seven prominent members of the civil society in a letter to the Chief Justice of the High Court pointed out the injustices faced by the social activist and requested an early hearing. However, at the time of the writing this article on May 10 there has not been even an acknowledgment in the matter by the Gauhati High Court.

Civil society has expressed concern about the consequences of such executive tactics for Indian democracy. More than 30 people including academics, advocates, senior journalists, writers, activists, former parliamentarians and others from across India issued a statement on April 2. The signatories have deplored the way norms of natural justice have been circumvented to detain Gogoi in one case after another, rendering respective bail orders ineffective. It was clear that the repeated arrests of Gogoi, was intended to enable the government to keep him in custody without any trials. As a result, he has been deprived of his right to personal  liberty. This practice of re-arresting the accused in old cases, when the charge sheets could not be filed in any major charges, is an attempt at circumventing the judicial scrutiny of executive actions. It of course is a gross violation of the norms of natural justice.

The higher judiciary needs to intervene to protect the human rights of all activists who suffer such injustice. Gogoi’s health has also been deteriorating and the jail authorities have not been giving him proper treatment. As a result, the NIA special court had to order a check-up and also to constitute a medical board to monitor his health. Despite illness, Gogoi has not been hospitalised and the authorities have been merely making rounds of the Medical College in the late afternoon when only junior doctors are present.  It will be extremely unfortunate if something serious happens to him, particularly in the context of the pandemic. The legal fraternity now needs to keep a hawk’s eye on our judicial process when an outgoing reputed judge says that the laws and legal system are geared in favour of the rich and powerful.

First published in The Leaflet.
Apurba K Baruah is an eminent academician and former Dean of School of Social Sciences, North Eastern Hill University.
Disclaimer: The views expressed in this article are the writer's own, and do not necessarily represent the views of the Indian Writers' Forum.