Speaking Up
Lockdown at JNU: After Ramayana, another webinar on the “Saraswati Civilisation”
June 12, 2020 Sabrang India 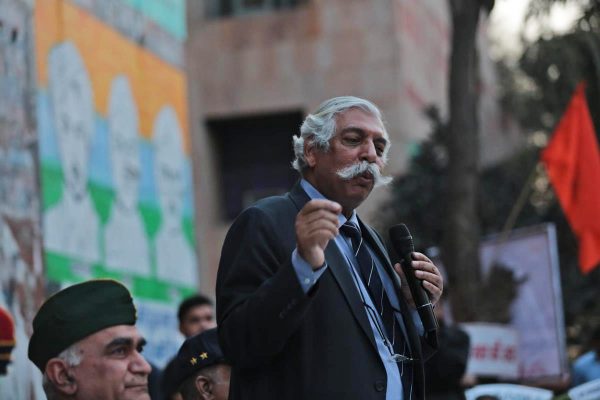 Mamidala Jagadesh Kumar, the vice-chancellor of Jawaharlal Nehru University (JNU), has been even more preoccupied since the national lockdown was announced and all universities and schools across the country shut down their campuses. He has been busy organising webinars inspired by religious texts such as the Ramayana, and recently, another one was announced inspired by the “Saraswati Civilisation” on June 13. This latest initiative, the invite to which was posted by Kumar himself, was hosted by the university’s Centre for Historical Studies (CHS) of the School of Social Sciences, though senior faculty members of the department have stated that they had no part in this decision. The webinar was titled "The Saraswati Civilisation: A Paradigm Shift in Indian History" and the speaker was Retd. Major General G. D. Bakshi. Major Gen Bakshi is a well known face, who rose to celebrity status, especially among those who followed the nightly, TV debates organised by Times Now, and The Republic channels.

However, there is a twist here — senior faculty members of CHS say they were not even aware, let alone consulted about such a webinar taking place. Most of them came to know of it when the VC posted it on social media. They have written to the VC expressing their “grave concerns and misgivings” about the webinar.

They have questioned the VC associating the Centre for Historical Studies as the host or organisers of this webinar, when most of the faculty members part of this department, were not even aware of it till they saw the VC’s tweet. “The tweet mentions the programme as being organised by the CHS and mentions professors Heeraman Tiwari, Umesh Kadam and as well as Dipendra Nath Das, Dean SSS as organisers. This raises certain issues that we would like to bring to your attention. Seminars, conferences, workshops, in fact all matters of academic functioning are a Centre’s prerogative and are addressed by professional and eminent scholars who are invited by the faculty for this purpose,” wrote the group of professors.

“The CHS has a set of nominated faculty members who co-ordinate the Centre’s weekly seminars, usually held on Wednesdays at 3 pm. These members inform the faculty about designated programmes and also elicit names of speakers from them, which are then duly communicated and endorsed in a formal faculty meeting.” Professor Rajat Datta told SabrangIndia there are internal discussions held when these seminars are organised and “all those interested are welcome to attend. A lot of students attend these seminars too.”

None of these protocols have been followed before deciding on the seminar that has been now announced. “The lockdown has given no reason to dispense with this system because the faculty has not decided to do away with this arrangement and faculty meetings have been conducted by the Chairperson on Zoom. It would be useful for us to know whether this procedure was followed in the present instance, and if not, we would like to know under whose authorisation was this bypassed?” the professors have asked in their statement.

According to Datta, he and other faculty members of the CHS, are “not a part of this webinar”.

The statement signed by professors Kumkum Roy, Sucheta Mahajan, R. Mahalakshmi, Supriya Varma and many other professors, stated that it was important to communicate any seminar plans though the proper channels and discussed, as has been done earlier, “since all faculty members are in contact on mail, and many on the WhatsApp group and other mechanisms, through which communications have been taking place, updating the faculty and seeking its endorsement on academic matters are possible, essential as well as desirable.”

They state that it was important for the long-term interests of the functioning of the Centre, “that we all remain committed to established practices and norms, were not dispensed without due process.” They have asked the VC to hold virtual meetings if needed.

The professors have also asserted that if this seminar is an “individual initiative” by the VC then he must “issue a clarification so that the name of the CHS is not used for a programme that has not been endorsed by the faculty.”

The VC of course is yet to acknowledge the letter from the group of his senior colleagues. Perhaps he never will, confident in the fact that under the present lockdown conditions, none of the CHS professors who may have any objection to any aspect of this seminar, will be able to protest for real. According to a JNU lecturer this seminar is yet another attempt to give a platform to Right Wing speakers, “the gloves are off. This is an attack on liberal thought, and the lockdown has presented the perfect opportunity to the Right Wing.”

However senior JNU faculty such as Rajat Datta are not deterred by that, “It is a question of putting this dissent on record. The CHS has stood for secular progressive history, interpreting it in a progressive enabling fashion. Being anti-communal is top priority,” he said.

Meanwhile, the School of Sanskrit and Indic Studies, Jawaharlal Nehru University (JNU) had also announced free classes online as a: Sanskrit Summer School, seats for which are available on a first-come-first-served basis. These classes will have various courses and will be held till June 30. Those who have basic knowledge in the Sanskrit text, were eligible, and will be awarded a certificate after clearing an online exam when the summer school ends. It had also been reported that JNU had once again advised the told students who were still stranded on campus to return home. Those who had left earlier were told not to return to the hostels till the Union government announced the reopening of universities.

Of course the latest from the university often under attack by right wingers, who hate the liberal values still being kept alive by the majority at JNU, is that the university has been ranked as one of the top Central Universities in NIRF 2020 rankings.

As faculty member and former student Happymon Jacob posted on his Facebook wall: “To all JNU-haters out there, here's your bête noire JNU consistently claiming 2nd rank in the Government's own ranking. JNU is 2nd among Universities! Now say "Thank you!" And students and colleagues at JNU, Take a bow!”