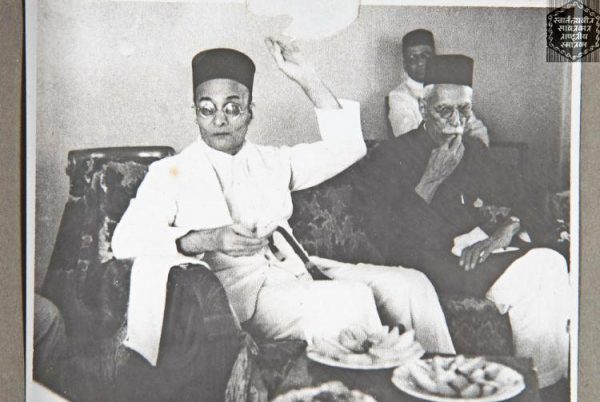 Savarkar is in the news yet again. The Opposition parties in Karnataka have opposed the naming of Yelahanka flyover in Bengaluru after Savarkar. The Prime Minister, Narendra Modi, said late in May that Savarkar had inspired many Indians to join freedom struggle. Just about a year ago the BJP in Maharashtra, while seeking votes for the Assembly election, had said in its manifesto that the Bharat Ratna should be awarded to Savarkar. The BJP’s opponents see Savarkar as a communalist who, as the ideologue of Hindu nationalism, had used the word Hindutva to redefine Hindus in a particular way. It is also Savarkar who had laid the theoretical foundations of the “two-nation theory”, which justified, in ideological terms, the Muslim League’s demand for a separate Pakistan in 1940.

That Savarkar had a communal mindset right from the beginning is exemplified by his group’s attack on a mosque when he was just a boy. Even within the Hindutva circles, he is praised for two things: one, his book on 1857 which called it the “first war of Independence” and his opposition to British rule in the days before he was imprisoned in the Cellular jail on the Andaman Island. It is true that Savarkar had declined to take the oath of loyalty to the British Empire after he had passed his bar exam.

Savarkar had participated in anti-British activities, which ended in his being awarded a 50-year term in the jail. That would have amounted to hardship, but the fact is, he was not the lone prisoner there. Most of the prisoners of the Cellular Jail suffered cruelties and atrocities. But it is Savarkar among them who chose to send mercy petitions to the British authorities while he was imprisoned. In his petitions he not only apologised for his past actions, but also promised to support the Empire in whatever way the British thought fit.

Savarkar’s followers justify his apologies by calling it “shrewdness”, and comparing him with the Maratha ruler Shivaji. Fact is, after he was released from Andaman, Savarkar remained totally loyal to the British, got a hefty pension of Rs. 60 a month from them, in short he gave no evidence of “shrewdness” except in weakening the freedom struggle. Savarkar had already sown the seeds for damaging India’s struggle to throw off the yoke of British rule when he proposed the divisive ideology of Hindu nationalism. He propagated the idea of nations; one Hindu and one Muslim, and defined a Hindu as one who regards India as his fatherland as well as holy land. The word he brought to the fore, Hindutva, is slowly becoming synonymous with Hinduism. To Savarkar’s eyes, Hindutva is the whole of Hinduness. But while Hinduism is a religion, Hindutva is politics. It is a politics that emphasises on the superiority of a so-called Aryan race and of the Brahmanical culture.

Savarkar’s followers gloss over the fact that he never participated in the major anti-British movements of his time. This is contrary to what Modi said about him inspiring Indians to participate in the freedom struggle. In 1942, Savarkar issued instructions to the followers of the Hindu Mahasabha to stick to their occupations and work and to not do anything which would put the British at inconvenience. He was instrumental in getting lakhs of Hindus recruited into the British army, and thereby assisting the British war efforts. The interesting contrast with Subhas Chandra Bose is very obvious her. There are claims that it is Savarkar who advised Bose to form an army, the fact is that Bose fought the British with his INA (Azad Hindu Fauj), while Savarkar recruited for the imperial army.

The contrast with Bhagat Singh is equally noticeable. Savarkar’s mercy petitions seek the British pardon and offer to collaborate. Bhagat Singh wrote to the British that since he is opposed to British rule and a rebel he should therefore face a firing squad and not be hanged until death.

Today, Hindu nationalists blame the Muslims and Gandhi for the Partition. They do not want people to know that the Hindu Mahasabha had collaborated with the Muslim League in forming ministries in Bengal, the Sindh and the North-West Frontier Province at a time when the Congress party was leading the Quit India movement.

Those eulogising Savarkar focus on the first part of his life; the pre-incarceration times. Whatever his efforts against the British may have been, even then he was a communalist to the core. For instance he saw the war of 1857 as a collaboration of Hindus and Muslims against Christians and not an anti-colonial revolt of peasants. The RSS regards Savarkar as the “father of Hindu nationalism”, but there are a few differences of opinion between Savarkar and the RSS. For instance Savarkar did not regard the cow as holy, but a useful animal.

While he upheld the Hindu scriptures which are based on caste and gender hierarchy, he was very critical of Buddhism and non-violence. He thought the creed of non-violence made India week. In his writings he is clearly patriarchal and he thus lays a foundation for a stridently conservative communal politics. For instance Savarkar is critical of Shivaji’s decision to return the daughter-in-law of Kalyan, brought to him as a “gift” by his army. Savarkar felt that she ought to have been dishonoured, and that would have avenged Hindu fury.

Savarkar’s role in Gandhi’s murder has also been studied from various angles. He was tried for this crime and exonerated from lack of corroborative evidence. Congress stalwart Sardar Patel was clear that the murderer was from a radical wing of the Hindu Mahasabha.

Yet the effort to glorify Savarkar continues. His portrait adorns the Parliament already… but whether India needs such an icon is the question. For Hindu nationalists, he is already an icon but for Indian nationalists he is one who never identified with the struggle for a secular-democratic India. Hindu nationalists highlight the small part of his anti-British life seek for him an exalted status. Yet he was communal to the core, a collaborator for most of his life and along with the Muslim League, provided the logic for Partition, which was the objective of the British policy of divide and rule.

First published in Newsclick.
Ram Puniyani is a social activist and commentator. The views are personal