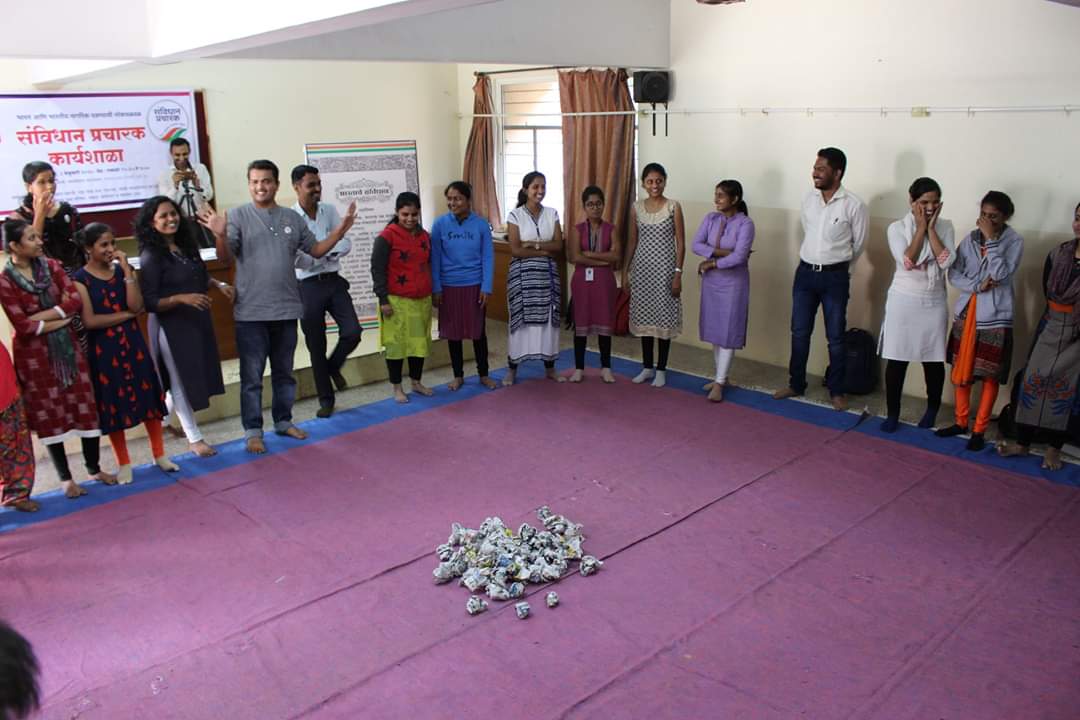 At a time when our nation’s Constitution is under immense attack, a network of ground level activists from different parts of Maharashtra have come together to educate people about the values of the book. The network, called Samvidhan Pracharak Samiti (SPS), has been engaging in ground-level campaigning across the state.

The activists are involved in the network as Samvidhan Parcharaks — promoters of the Constitution. “We try to use different participative methods, such as workshops, street plays and songs, and door-to-door campaigns, to talk about equality, secularism and freedom of expression,” Shital Bhandare, who lives in Ambernath and is associated with SPS, told the Indian Cultural Forum (ICF).

One of the core members of the network, Sandeep Akhade, told ICF that the basic aim of the group is to decentralise the founding principles of the Constitution, so that more and more people become aware of their rights.

In an article on Sakal Times, Akhade says that during his work with dalit and tribal communities in Maharshtra, he realised that many of them were not aware of their rights under the Constitution. He sensed the necessity of starting an awareness campaign.

Akhade told ICF that he gradually pitched his ideas to Nilesh, a lawyer practising in the High court of Bombay, and Nagesh, an alumni of the Karve Institute of Social Work, Pune. The three of them mobilised various student organisations and sought advice from professors, activists, journalists and artists to start the awareness campaign. Their efforts finally culminated in a three day workshop in Pune in February, 2019. The workshop educated students about the history of the Constitution, its basic features and the preamble. The first workshop, Akhade says, had over 70 participants, who were given thorough training to speak about the Constitution in their localities. Today, there are over 900 trained Samvidhan Pracharaks all over Maharashtra.

Nagesh says, “we have people working in different parts of the state. Now we are also getting calls from regions like Bihar and Madhya Pradesh, and we are finding ways to extend the work to these states.”

An enduring feature of the group for Sandeep, Nagesh and Shilpa is their constant efforts to keep the functioning as democratic as possible. Nagesh also said, “it comes with a lot of challenges, but we make all efforts to keep the decision-making democratic”. “We prefer to call it “lok chalwal” (people’s movement), to highlight its democrtaic character. There is no one leading the group”, said Sandeep.

Before Shital became associated with SPS, she was part of a local initiative of similar nature called Samvidhan Sanvardhan Saksharta Abhiyan (Constitution Awareness and Literacy Campaign). “Before this, I did not know much about the Constitution, except that Babasaheb Ambedkar wrote it”, she said. The workshops organised by SPS have helped her understand the crux of the Constitution.

Ever since the lockdown began, members of SPS have faced various challenges in carrying out their activities. However, they are not only trying to continue the discussions related to the Constitution on online platforms, they have also started new initiatives to provide help and relief to people affected by the lockdown. “The real problem with the lockdown and its execution is that the information from the government is not reaching people. Even if they may arrange for some relief, shelter, food and transport, this is not being communicated to the people affected by the lockdown”, says Nagesh.

SPS has also set up a helpline for anyone in distress during the lockdown. The work revolves around helping students and migrant workers to get passes with permission for traveling, raising funds for relief work and distributing ration.

Lynchings, hate crimes, passing of the Citizenship Amendment Act, and the abrogation of Article 370 without the consent of Kashmiris are some of the instances that point to the loss of an inclusive, equal, secular and just society that our Constitution seeks to establish. In such a scenario, the efforts of SPS to educate people about democracy, equality, secularism is much needed to save the Constitution itself.