On March 24, the day when Prime Minister Modi declared the first three-week lockdown, India had 390 COVID-19 cases, and nine deaths due to the disease. The first case had been reported on January 30. It had taken some 54 days to reach 390 cases.

Now, on May 27, another 64 days have passed – all under the lockdown. The number of cases has increased dramatically to nearly 1.52 lakh and 4,337 people have lost their lives to coronavirus.

These are the numbers that matter to the people. In the smoke and mirrors game of doubling rates, reproduction rates, seven day moving averages, and log scales – all very right, and useful – common people somehow lost their grip of the COVID-19 situation. What they really see is that 64 days of lockdown has seen cases jump from a measly 390 to a staggering 1.52 lakh.

There are umpteen ways of showing this, but the chart below shows one key and most revealing aspect – how many cases are being identified every day. As you can see, on March 25, the first day of the lockdown, 114 new cases were reported. On May 27, 6,387 new cases have been reported. All these numbers are taken from the Ministry of Health & Family Welfare’s website, and collated by NewsClick’s Data Analytics team. 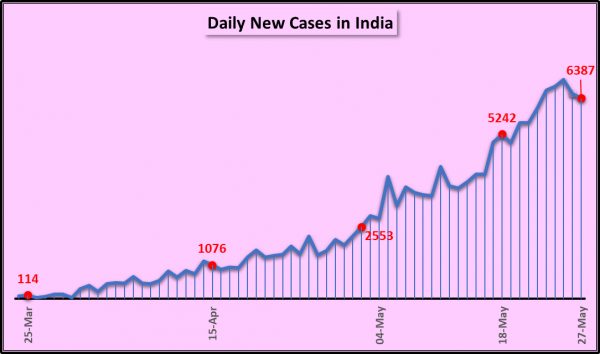 There can be no doubt that the dreaded pandemic has sunk its teeth well and truly in India. It doesn’t matter that in India, the mortality rate of around 3% is below that of some other countries. Or that there are at least nine other countries which have more cases than India. Or that recovery rate (those getting cured) is improving. All these statistics may soothe the sinking, panicky feeling – but nobody is content and happy that others are worse off.

Why Has This Happened

It will be a matter of future investigation as to how exactly this sad and unfortunate trajectory came into being. Much of the data that the government should have put together and used as a guide is compromised or doesn’t exist. Nobody knows whether the daily forms being filled by remote primary health centres and passed along upwards do really get counted, or whether they even reflect reality. But, whatever be the limitations, some things are crystal clear – and the people need to know this.

The biggest folly was to embrace a lockdown policy without proper thought being given to it, without due preparation and with no idea of what its consequences will be. That a government that runs a country the size of India should be guilty of such shoddy thinking is in itself astonishing. But that’s what happened. As a result, the economy went into closedown mode, millions were left without earnings or jobs, lakhs started leaving their workplaces in order to get back home, just to survive, or, if not, then die with their loved ones. The government didn’t think of standing crops or rural employment guarantee programme or urban unorganised sector or protecting frontline workers – nothing. It was one of those shock and awe things that the prime minister is so fond of.

This effectively punched holes in the lockdown, as the government scrambled to deal with one crisis after another. It granted over a dozen exemptions from the lockdown. And, yet, it didn’t spend any money to prevent families from descending into near-starvation level existence. From March 24 onwards, it was nothing but justifying a folly and fire-fighting to contain its catastrophic consequences.

As a result, not only was there no containment of the pandemic, but the economy too went into a tailspin the like of which has not been seen in living memory. Latest data shows that the economy is likely to contract by over 6% with wide variations among states.

Meanwhile, what about the pandemic itself? The conventional wisdom was that if measures like lockdown and strict social distancing are put in place, the pandemic toll would not rise sharply. Rather, it would get spread out and delayed. That’s what was called flattening the curve. Instead of a sharply rising peak, you have a plateau. This would give time to the government to speedily put in place medical care facilities to deal with the patients, distribute personal protective equipment (PPE) to healthcare workers and other essential service providers like sanitation workers, police personnel, etc., and to educate the people on precautions.

The government was so enamoured of its mighty lockdown that it started believing in its own propaganda. It thought that merely closing down everything would make the pandemic go away – almost like President Trump of US and President Bolsanaro of Brazil. It started ordering testing kits and PPE after the lockdown was already declared. Isolation wards and quarantine facilities were designated – not really established – subsequently. It left most of this decision making to the state governments, complacently basking in the glory of its lockdown decision. It felt that the Disaster Management Act had given it all the powers to issue commands, but left all the dirty work to the state governments and local bodies.

Its biggest failure was in its ostrich-like approach to testing. All experts and scientists agree that if you want to beat the virus, you need to test people so that before things get out of control you can isolate them and prevent the virus from spreading. The Modi government refused to listen to this scientific opinion and went on testing only those who arrived from abroad, and then those who showed symptoms. So, a vast number of people were going about carrying the virus unwittingly. In the absence of accessible and free healthcare or testing facilities, and the overcrowding at the designated ones, thousands of people – maybe hundreds of thousands – continued to spread the virus because they were never tested.

History Will Not Pardon

When a cold objective view of this period is taken by future generations, all this will sound incredible. Can a government be really so indifferent to both, its people and science, to have dealt with the COVID-19 crisis in this callous and indifferent manner? It will also judge Modi and his government. for shamelessly using the pandemic to push unpopular changes in the economic system, ranging from privatisation of public sector units, to destroying protective labour laws, and handing over agri-commodity trade to private entities. Besides the tragic handling of the COVID-19 pandemic, and the avoidable toll it is taking, this period will also be remembered for the dismantling of the pro-people and welfarist trappings, so that private monopolies, both domestic and foreign, can take over the economy.

In the name of fighting the pandemic, Modi and his government have lost the battle, and also mortgaged the country and its people to greedy slave drivers. It will be difficult for this to be ever pardoned.

First published on 28 May, 2020 in Newsclick.
COVID-19 data collated by Peeyush Sharma and Pulkit Sharma of NewsClick Data Analytics team.